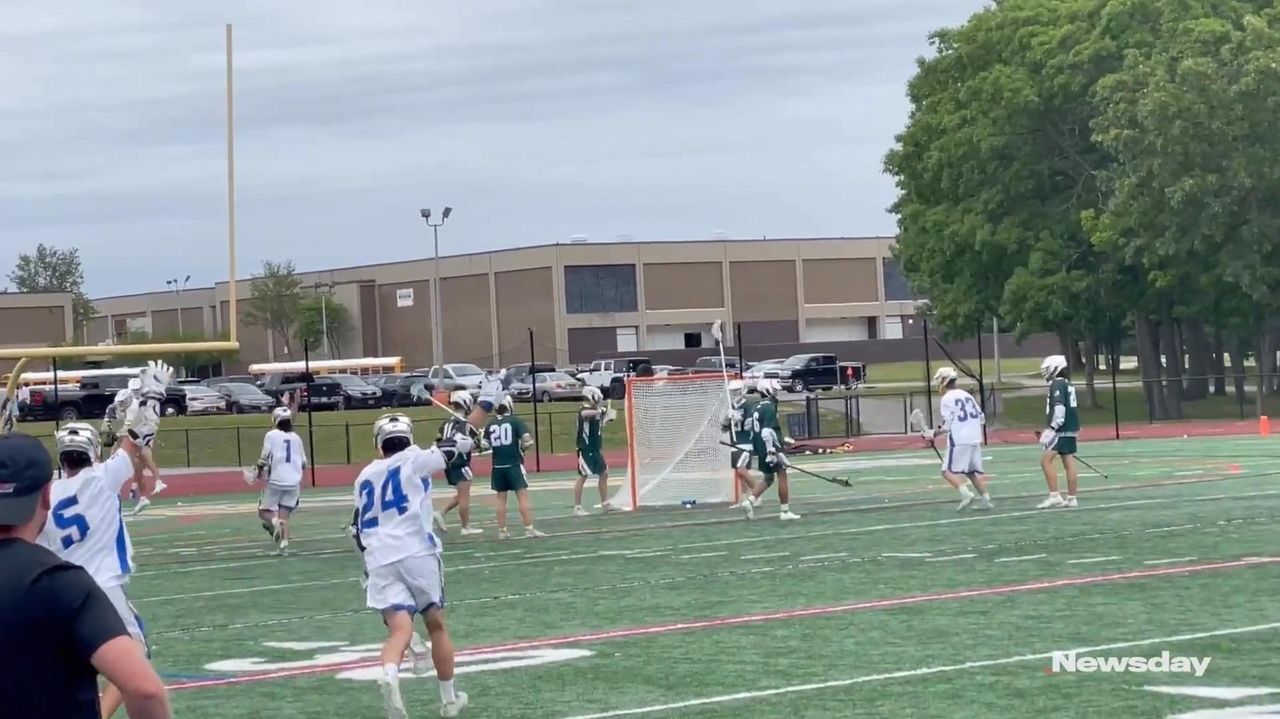 Highlights of No. 1 Comsewogue’s 6-4 home victory over No. 4 Harborfields in a Suffolk Class B boys lacrosse semifinal on Saturday, June 12. Credit: Newsday / Mike Ruiz

From 2017-19, Aiden McCaffrey and a number of other Comsewogue boys lacrosse seniors who began in eighth grade had experienced three consecutive seasons falling just short of advancing to the county championship game.

On Saturday afternoon, that theme came to an end.

Michael Katz scored two goals, Justin Bonacci and Corey Watson added one goal and one assist apiece and McCaffrey anchored a strong defensive performance as No. 1 Comsewogue completed a fourth-quarter rally at home to defeat No. 4 Harborfields in a Suffolk Class B semifinal.

Comsewogue had all the answers in the fourth quarter, outscoring the Tornadoes 3-0 after entering the final period trailing by a goal. McCaffrey reflected on what the victory against the two-time defending county champions, who defeated Comsewogue in the 2019 semifinals, meant to his squad.

"I want to win this for this whole coaching staff," McCaffrey said, "but more importantly, I want to win it for this team. We’ve played together since we were five years old…I’ve been on this team for five years and I’ve lost in the semifinals too many times, so this one feels especially good today."

"This is amazing," Bonacci said. "I’m super excited. We haven’t been here in a while so I’m really excited to hopefully hold the county title. "

An underhanded goal from James Mantione with 1:25 left in the third cut the Harborfields lead down to 1 and began the momentum swing. Corey Watson then bounced in a shot with 9:09 remaining to knot the score at 4 before finding Katz in transition a minute later for the go-ahead goal. Bonacci tacked on the final goal on an assist from Brett Deegan with 4:55 to go.

"I think everyone just kept their heads up and we kept a positive mindset," Katz said. "And we just started putting the ball in the back of the cage."

Stephen Markowski and Andrew Grover tacked on two goals early in the second quarter to give Harborfields (9-7) a 3-1 advantage entering halftime. Once the two sides traded goals over the first eight minutes of the third, Comsewogue had a significant uptick in both intensity and physicality on the defensive end, which immediately sparked its transition offense.

"It was just our communication," McCaffrey said. "We weren’t talking as much as we should’ve been in the first half. So once we started talking and they couldn’t hear what they were calling out on offense, that was it. We brought our hands to the ball and turned defense into offense."

Comsewogue coach Pete Mitchell has a straightforward message for his team entering the final, hoping to win their first county title in over a decade.

"It’s just about trying to finish," Mitchell said. "West Islip is traditionally a powerhouse so it’s going to take everything we’ve got to compete with those guys. Our message is to try to finish. And I’m sure there’s will be the same."

No. 3 Bayport-Blue Point advanced to the Suffolk Class C boys lacrosse final with a thrilling 11-10 road victory over No. 2 Shoreham-Wading River. Gavin Locascio led the way for the Phantoms with three goals, including the winner in overtime.

Jameson Smith added two goals and three assists, while goalkeeper Matt Nilan had eight saves for Bayport (12-3). Alec Gregorek had five goals and one assist for the Wildcats.

Lucas LaForge led the way with four goals and one assist as No. 1 Mt. Sinai defeated No. 4 Islip the other semifinal.

Mt. Sinai will host the final on Wednesday at 4 p.m.