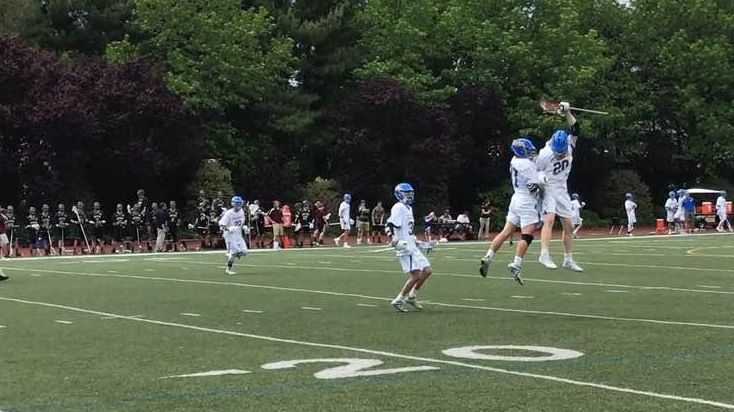 Kellenberg’s Sean Crotty saw one thing when he scored his third goal of the game.

“I saw the victory,” said Crotty, of Long Beach. “I saw the finish line. I knew that our team could pull together and pull through with this outcome.”

The goal with 8:26 remaining in the fourth quarter gave host Kellenberg a two-score lead in its 11-9 boys lacrosse victory over Iona Prep in the CHSAA Class AA Intersectional championship on Friday. Crotty’s goal came one minute, 30 seconds after Jack Leghart’s leaping goal off Dylan Willis’ second assist of the game broke a tie at 7.

But Leghart’s memory wasn’t quite as strong as Crotty’s.

“I’m trying to remember that one,” said Leghart, still in a state of euphoria just minutes after Kellenberg celebrated its first downstate championship since 2012 with a dogpile. “I didn’t even look at the shot. I kind of just got that lucky angle. A go-ahead goal, emotions are pretty high.”

Leghart added his third goal of the game off an assist from Matt Sluka with 3:04 remaining to give the Firebirds a 10-8 lead.

“I’m just very happy,” said Willis, of Baldwin. “All our work has paid off and it just feels good to finally be the champions.”

Kellenberg controlled possession throughout, thanks in large part to PJ Argiros’ domination in the faceoff circle. He won 18 of 24 draws to catapult the Firebirds’ offense.

“PJ helps us so much,” Crotty said. “We can’t have many wins without PJ.”

“I really just played for my team, I kept that in the back of my mind,” said Argiros, of Levittown. “I kept saying to myself, ‘For our seniors, this is our last game on this field and I want to make it count for them.’”

And his contributions also were felt directly on the scoreboard, when he scooped up a faceoff and ran downfield for a goal to tie the score at 7 with 51.8 seconds remaining in the third quarter.

“Seeing we were down by one,” Argiros said, “I just had to go for the net and score for us and keep the motivation going.”

Kellenberg opened a 3-1 lead after the first quarter before Iona Prep scored three straight goals in the second to take the advantage. But Crotty and Leghart provided goals in the final minute to take a 6-4 lead into halftime.

“We knew Iona would never quit and our guys were just determined,” Schwalje said. “And they didn’t want to lose on their home field.”

And the Firebards are just as determined to bring home the program’s first state championship.

“That would be amazing,” Leghart said. “We have the skill set for it so I’m just ready.”