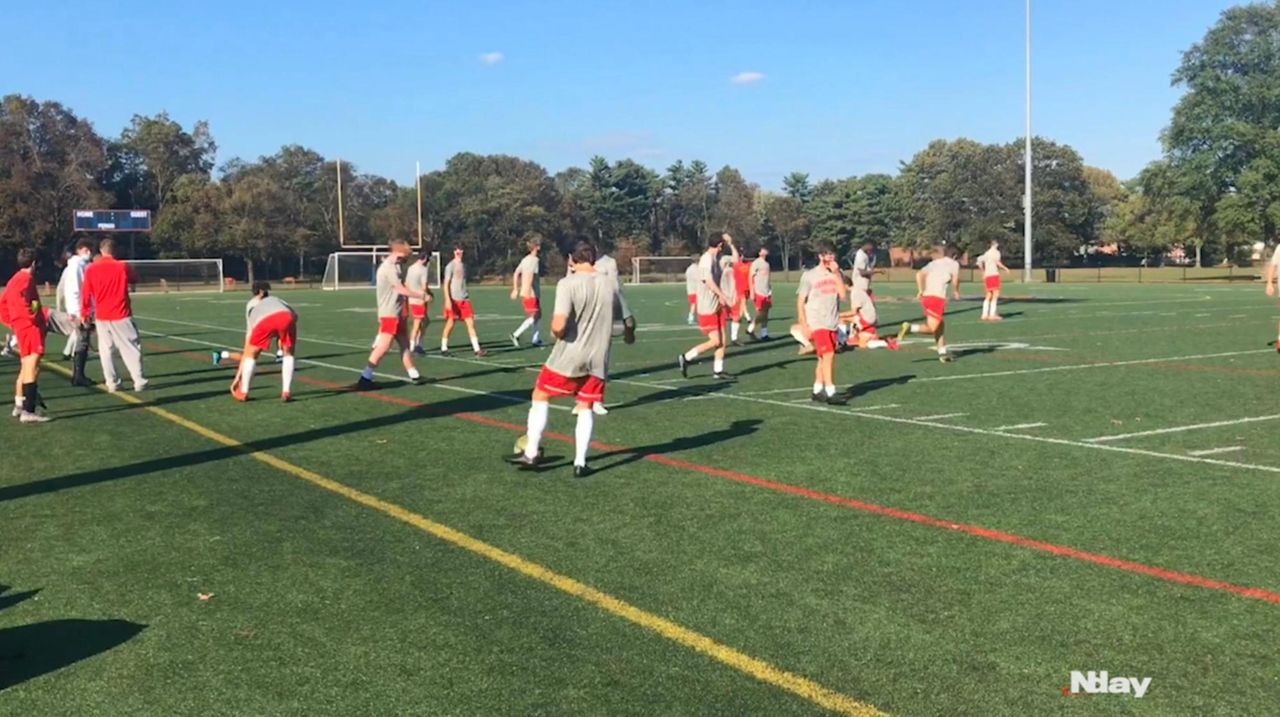 Players from St. Anthony's and Chaminade talk about the start of the CHSAA boys soccer season.  Credit: Newsday / Laura Amato

Every time Christian Micheli steps onto the field, he knows it’s an opportunity to get better.

A year after allowing one goal in four postseason games and helping St. Anthony’s win the state CHSAA boys soccer championship, the Friars' senior goalie has no intention of resting on his laurels. Instead, Micheli said he’s focused on improving his game and stepping into a leadership role because in a season played in the shadow of COVID-19, simply getting the chance to compete is something he relishes.

"We want to win another championship and we want to get everybody into that mindset and having a winning mentality," Micheli said. "With everything that’s going on, us being one of the only teams playing, we go on the field every day happy that we’re allowed to be out here."

COVID-19 restrictions mean the Friars won't be able to make a run at a second straight state title, but the Nassau-Suffolk CHSAA still has plans for a full postseason and St. Anthony's is anxious to defend its league crown. With experience in close games, including a 2-1 overtime win over Kellenberg in last season's league final and a penalty shootout victory over Fordham Prep in the state semifinal, as well as Micheli's return to net, the Friars are confident they can go back-to-back.

Coach Don Corrao, taking over for long-time coach Gene Buonaiuto following his retirement, called Micheli "one of the top keepers in the tri-state area," adding that any title defense "starts with him."

"In terms of getting to a league championship, you’ve got to do it defensively," Corrao said. "There’s been a high work rate. Boys are focused, especially early on . . . but you’re only as good as your last practice."

That also means acclimating to the requirements of playing in a pandemic.

Coaches and players wear masks throughout practice, as they will during games and, this season, spectators won’t be allowed. It’s taken some getting used to, but St. Anthony’s senior defender Logan D’Aoust said the team is "doing the best we can."

"We’re very fortunate to be playing right now, so we have to do what we have to," D’Aoust added.

Chaminade, which came into last season as four-time defending state champs before falling to St. Anthony’s, 1-0, in the league semifinals, boasts a solid core of returning players determined to get the Flyers back to their winning ways.

"We have one goal in mind this year and that’s to win the championship and take back what we lost last year," senior midfielder Matthew Auerbach said.

Kellenberg was one goal away from winning the league crown and enters this season with that missed opportunity in mind. The Firebirds finished 12-6-3 and 8-2-2 in league play, and they’ll return 13 seniors ready to take another crack at a championship.

"We’re all thinking about that last game and we have one message and one goal," senior goalkeeper Theodore Healy said. "Get back to the 'ship and win it this year."

St. John the Baptist will be vying for a title bid as well after a strong season in 2019. The Cougars finished 8-3-4 overall and 7-3-3 in league after falling to Kellenberg in overtime, 4-3, in the semifinals.

St. Dominic, Holy Trinity and St. Mary’s also return a handful of players, with all three teams looking to make a splash this fall.

No matter what uniform they’re wearing though, teams are hopeful that getting back on the field will be a much-needed return to normalcy.

"For as short as our season is," Chaminade coach Mike Gallagher said, "we want to make it the best...and treat everything as normal as possible."

Matthew Auerbach, Chaminade, Sr., M: Strong on both sides of the field, he dished out four assists as a junior.

Zachary Beach, St. Anthony’s, Jr., D: One of the leaders on a Friars back line that posted nine shutouts last season.

Theodore Healy, Kellenberg, Sr., G: Racked up 91 saves as a junior, including a 10-save performance against St. Anthony’s in the league championship.

Jack Quinlan, Kellenberg, Sr., M: Recorded a pair of multi-point games as a junior and finished with seven goals.

CHSAA Boys Soccer Set to Get UnderwayPlayers from St. Anthony's and Chaminade talk about the start of the CHSAA boys soccer ...