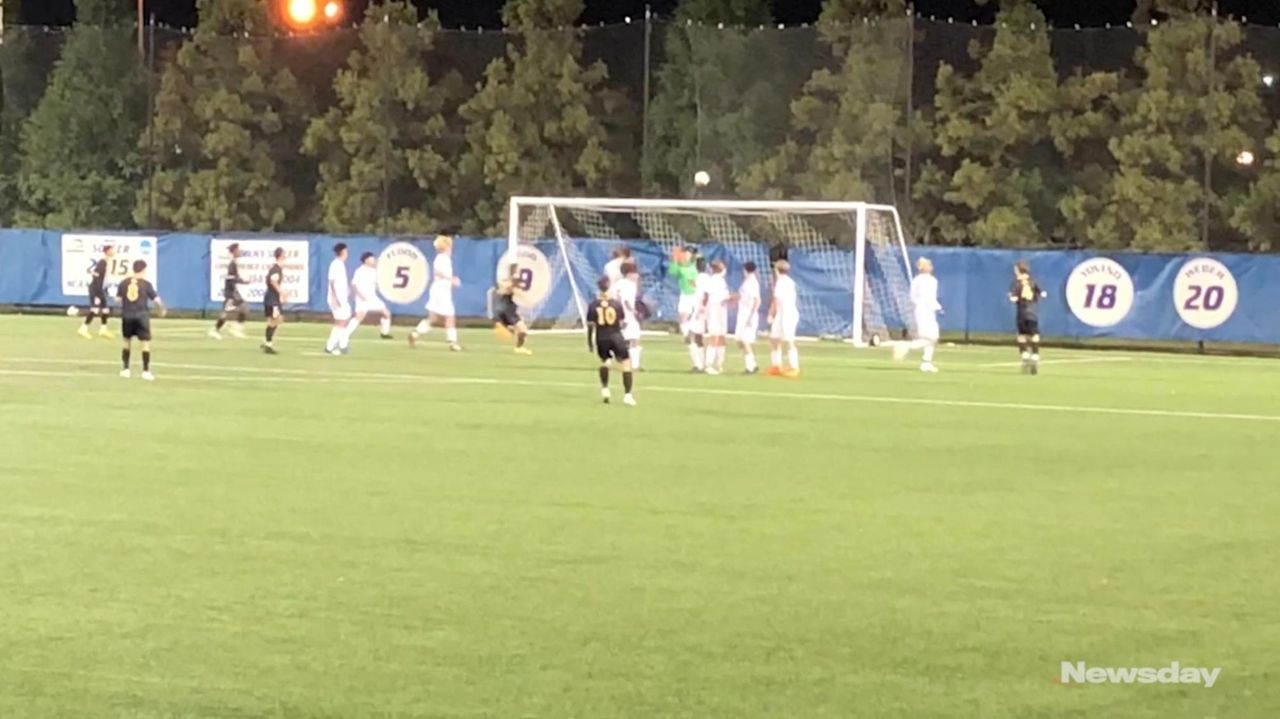 The deficit for St. Anthony’s was a daunting two goals with only about 18 minutes left in the game and possibly its season. The moment called for an aggressive move, and Chad Meyers provided it.

Another  scoring bid had been snuffed by St. John the Baptist goalkeeper Ryan Sisco, but Meyers didn’t retreat with his Friars teammates. The  senior stayed right with the ball, sneaked in to make a steal and put it into the left side of the goal.

The play was the match to the fuse for St. Anthony’s, which exploded to score three goals in the final 17:56 and eked out a 3-2 victory in a CHSAA  soccer semifinal  Tuesday night at Hofstra.

Michael Algieri tied it with a goal off a nifty pass from Jevon Burke with 7:26 to play, and Meyers broke the tie with a goal off a direct kick from about 22 yards. His shot got over the wall of defenders and landed high in the net with 3:44 left.

The No. 2-seeded Friars (13-6-1) will meet  Chaminade  in Sunday’s 1 p.m. title game at Hofstra for the right to represent the Diocese of Rockville Centre in the Catholic state tournament. St. Anthony’s lost to Chaminade, 1-0, in last season’s final.

“Three goals in 18 minutes is just amazing,” St. Anthony’s coach Gene Buonaiuto said. “Down 2-0 is a difficult spot. That first goal peppered us up.”

Algieri saw his team’s true character in the face of defeat. He said “staying composed” was the key because “when we’re composed we’re at our best.”

St. John the Baptist (11-4-1) wasn’t on attack much but made the  most  of it when it was. Ryan Tomczyk scored on a pass from a sprinting Michael Medina with 40:46 left, and Danny Ubert doubled the margin when he stole the ball  near  the goalmouth and put it past a diving Anthony Badalamenti with 36:25 left.

With Cisco stonewalling the Friars with nine saves already, things looked bad for them until Meyers struck.

“It wasn’t a designed play, but you stay in there and if an opportunity presents itself, you go for it,” Meyers said of his first goal. Of his second, he said: “I needed to get it over the wall. I knew if I did that, there was a good chance it would go in.”

“[Meyers] might have the best skills on the team, but he needs to play with the energy you saw today to be his best,” Buonaiuto said.

Algieri and Burke have been central to the Friars’ attack all season, and Algieri called their hook-up for the tying score “chemistry at its finest.”

Chaminade 5, Kellenberg 1: The Flyers (14-5) prevailed in a physical matchup to reach another title game. They have won  or shared the last seven CHSAA championships.