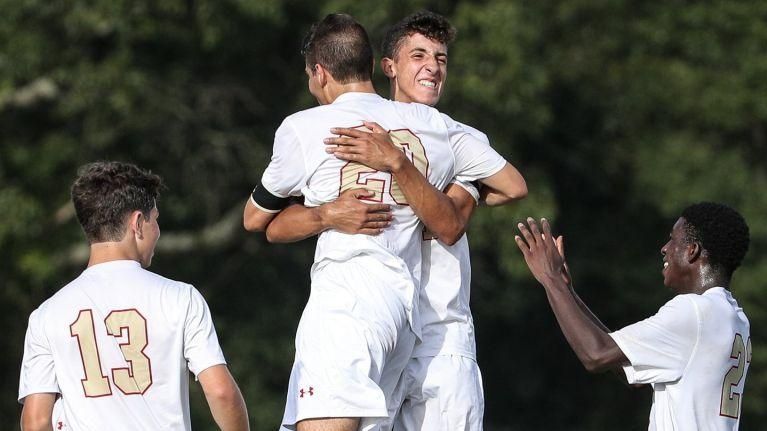 Whether it was calling ‘heads’ for the pre-game and pre-overtime coin tosses (he won both), or using his ‘head’ in the first overtime, Musacchia made sure the Colts came out ahead against their competition.

The senior forward flicked a beautiful header off the far post and into the net for a golden goal with 3:22 left in the first overtime as No. 5 Hills West stunned top-seeded and host Commack, 1-0, before a crowd of 400 in a Suffolk AA semifinal.

Colts senior Nicholas Duchatellier took a long throw-in from 30 yards away with one recipient in mind: Musacchia.

“It was just a perfect throw,” said Musacchia, who has eight points in three playoff games. “There was a guy in front of me and a guy behind me, so I had to win my position. I got a good read on it, and was able to get in the right spot.”

At first, Musacchia didn’t see anything. He had his back to the net. After he flicked the ball on net, he heard a teammate yell.

“I turned around,” Musacchia said, “and saw it hit the post and go in.”

The goal set off a wild swing of emotions for both teams. While Hills West — which also won a playoff game at Commack in 2015 in overtime by the same score — had fans storm the field and celebrate with the Colts in the far corner, many of Commack’s starting players fell to the ground in disbelief.

“That’s the first time we were shutout this season, so kudos to them,” Commack coach Dave Moran said. “We had most of the scoring opportunities, but soccer is a funny game.”

The Suffolk League I regular season champ Commack (15-2-2) had a point-blank shot that missed over the crossbar with 6:40 remaining in the first, 15-minute overtime.

“When that went over the bar,” Colts coach Doug Gannon said, “I turned to the bench and said, ‘This is our day.’ ”

Both teams battled 20 mile per hour winds that benefitted Hills West in the first half and first overtime, and gave Commack the advantage in the second half. Commack’s Brian Mirman had eight saves, and the Colts’ Ben Nacht had six stops.