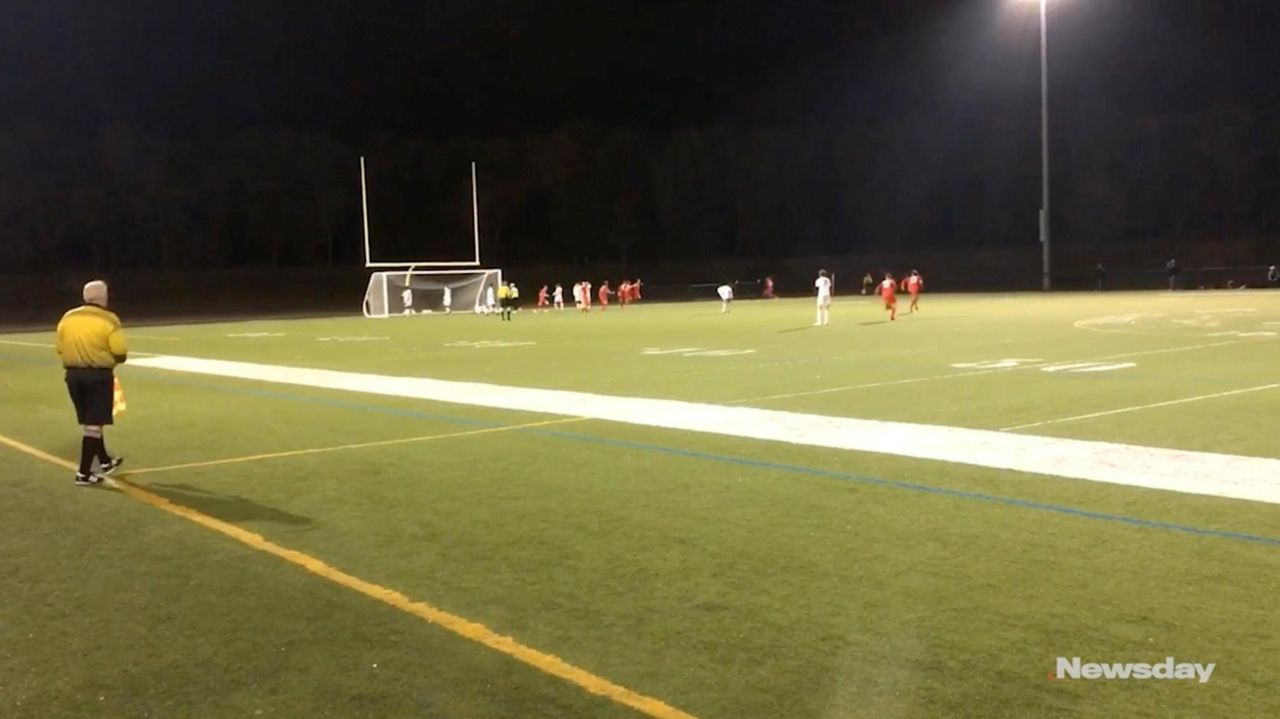 Jack Mahoney scored in overtime to lead Center Moriches to a 1-0 win over Hampton Bays in the Suffolk Class B boys soccer final on Sunday, Oct. 28. Credit: Newsday / Sal Cacciatore

The score is tied as the clock winds down. The defender rushes into the box for a late corner kick, rises to head the cross and puts it in the back of the net to win a championship.

For most, this is the stuff of dreams, but Jack Mahoney was very much awake Sunday evening.

Mahoney headed in Liam O’Brien’s corner kick with 3:20 left in the first sudden-victory overtime period to lift No. 2 Center Moriches to a 1-0 win over No. 4 Hampton Bays in the Suffolk Class B boys soccer final at Diamond in the Pines in Coram. The Red Devils (13-4-2) advance to the Long Island Championship against Carle Place on Tuesday at 7 p.m. at Berner Middle School in Massapequa, as they continue their bid to repeat as state champions.

“It was all kind of surreal,” Mahoney said. “I turned my head and saw the ball was in the net. I just stood there for a second not knowing what to do. And then I realized we just won. It’s a pretty great feeling.”

“I hit it to the front post and I knew Mahoney would be there because he’s always there,” O’Brien said.

Prior to his game-winning assist, O’Brien’s biggest contribution to the match was his man-marking of 19-goal scorer Debin Rivera. His work there was one of the highlights of a match that was defined by strong efforts by both defenses.

“He’s an incredible player and I just had to keep in front of him and make sure he couldn’t penetrate to move the ball to his teammates or take a shot himself,” O’Brien said of Rivera.

“Liam marking him took him out of the game and really gave us an advantage,” Mahoney said.

When Hampton Bays (7-9-1) did break the Center Moriches backline, Curtis Copenhaver was there. The senior made four saves, including two from close range in quick succession late in the first half.

“I’m confident in my teammates,” the keeper said. “They’re going to cover me and I’m going to cover them. Every match we go through, we get mentally tougher. We’re ready for every situation.”

Even situations normally reserved for dreams.