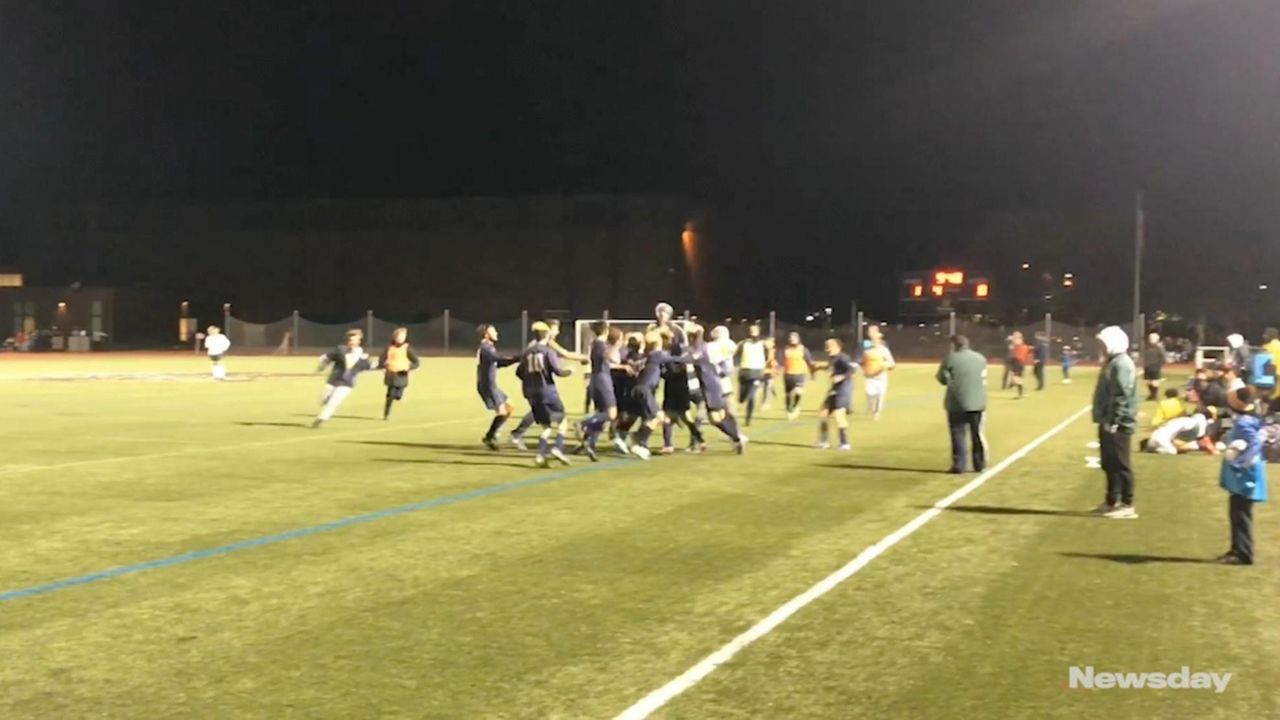 Stephen Kirtyan headed in the winning goal with 9:48 left in double overtime, leading No. 1 Massapequa to a 1-0 win over No. 5 Westbury in a Nassau Class AA semifinal on Friday at Farmingdale State. Credit: Newsday / Kenny DeJohn

The situation spoke for itself. Even so, the moment meant something extra to Massapequa’s Stephen Kirtyan.

The senior, who coach Matthew Burke said missed his junior season due to injury, came in like a rocket on Brian Boylan’s corner kick, leaping high to head in the golden goal with 9:48 left in double overtime.

Kirtyan rushed toward his bench and lifted his collar over his eyes as his teammates mobbed him. The top-seeded Chiefs defeated No. 5 Westbury, 1-0, on Friday night at Farmingdale State in a Nassau Class AA semifinal.

Massapequa advances to the county final at Mitchel Athletic Complex on Wednesday at 5 p.m. against the winner of No. 2 Port Washington and No. 3 Uniondale, a game which began late Friday at Farmingdale State.

“I’ve had many opportunities like that before,” Kirtyan said. “I saw the ball come in, and it was just perfect. I’m running in back post, not guarded, and I just got my head on it. That’s all I had to do.”

Kenny Chamo made nine saves for Westbury (9-6-1), which made its first semifinal appearance in program history, according to coach Chris Valentini. The Green Dragons’ up-tempo attack dominated the early stages of the first half, but Massapequa (14-2-1) controlled the pace for much of the second half and its defense posted its 11th shutout.

“They’ve been a big part of our team the whole season,” Kirtyan said. “We could not have won this without them.”

Boylan, who notched his 12th assist, said the Chiefs “fought a really hard game against a great Westbury team” but had a feeling it was over once he struck the corner.

“As soon as I hit it, I knew somebody was going to get a head on it,” he said.

It was Kirtyan who capitalized.

“This whole season has meant a lot to him because he was out with injury last year and he missed the entire year,” Burke said. “To have him come back and lead the team in goals and have the season that he’s had, I think it all just came to a head there.”