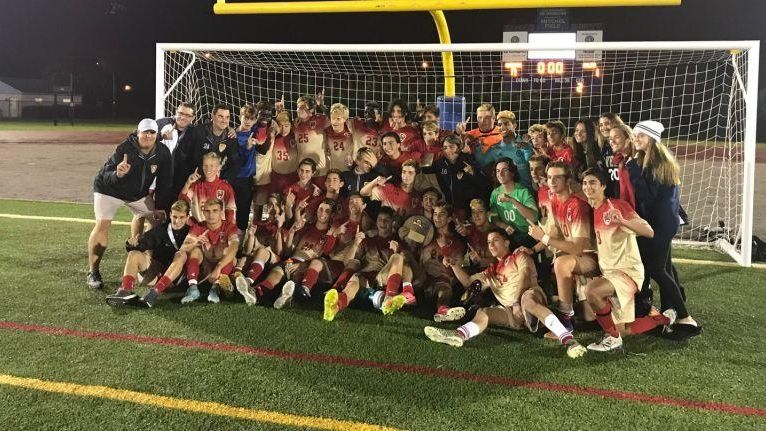 Andrew Bunsis’ father, Michael, told his son something surprising in the car ride to meet the Half Hollow Hills West boys soccer team bus on Sunday.

“He told me I was going to score today,” said Bunsis, a junior reserve outside midfielder. “I didn’t believe him.”

Bunsis, who had just one goal all season, took a beautiful cross from Frankie Viti and headed in the winner in the 18th minute as Hills West held off a persistent Uniondale team, 1-0, in a thrilling Long Island Class AA final at Mitchel Athletic Complex Sunday.

Hills West (17-3-1) advances to the state semifinal and plays Shenendehowa at 11:15 a.m. Saturday in Middletown. This is the Colts’ first Long Island crown since 2007, thanks in part, to Bunsis’ head.

“I never dreamed of this,” Bunsis said. “I’m so happy, but I never expected to be here.”

Hills West coach Doug Gannon subbed Bunsis into the game in the 13th minute. Five minutes later, Viti sent a long cross to Bunsis, who knew what he had to do.

Uniondale goalkeeper Jose Romero (five saves) could do little with the gorgeous header. Hills West kept the pressure on and outshot the Knights, 8-3, in the first half, but only managed the one goal.

Uniondale (10-2-3) looked like a different team in the second half, going on the attack and taking more than a dozen shots on Hills West. The Colts defense and goalkeeper Ben Nacht (10 saves) were up for the challenge.

“We were taking a lot of pressure in the second half,” said Nacht, who has not allowed a goal in the Colts’ last four playoff wins, a span of 326 minutes and 38 seconds. “It’s tougher to play when there’s that much pressure.”

Credit a Uniondale team which was in uncharted territory after winning its first Nassau boys soccer crown on Thursday.

“It’s tough because we had high expectations,” Uniondale coach Cohen Nelson said. “But we’re satisfied because we left it all out on the field.”

The same can be said of Hills West, now in search of its first boys soccer state title.

“This has been a totally unexpected run,” said Gannon, whose team was the No. 5 seed in the Suffolk AA playoffs. “They are such a group of overachievers, and I hope we can overachieve for two more games.”

And if Bunsis’ dad has any more words of wisdom for him before the state semifinal?