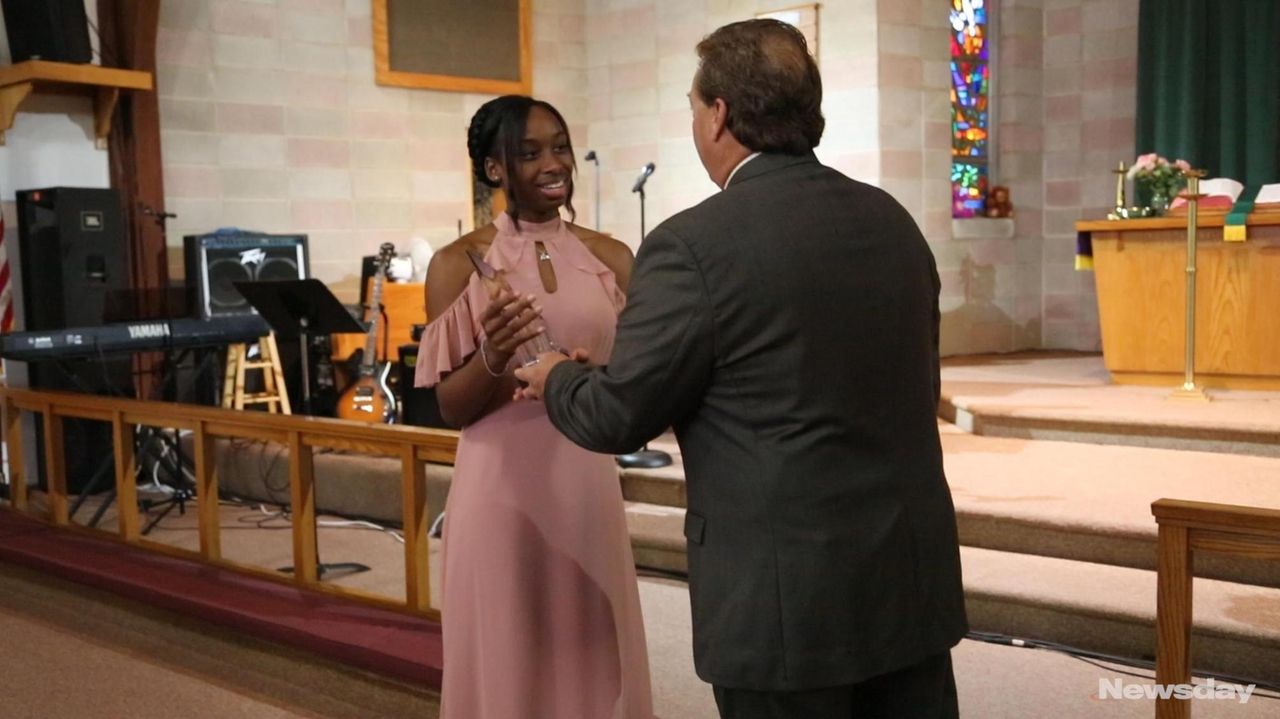 In the race to a full and fulfilling life, the baton was passed from brother to sister.

Two years after Livingstone Harriott Jr. won the Newsday Marcus A. Henry Award for being Long Island’s top athlete-scholar-citizenship, his sister, Alexandrea Harriott, has won the same honor. Both are Central Islip residents and Central Islip High School graduates, and for both, the award was never the goal. It was merely a byproduct of constantly doing the right thing on the playing fields, in the classroom and in the community.

“I don’t think we were vying for anything. It’s just the way we were raised, the way our parents molded us into becoming the people we are today,” Alexandrea said after a private awards ceremony Thursday at the family’s church, First United Methodist of Central Islip.

“After he won the award, I knew I had to step it up,” she said with a laugh. “I thought it was possible, yes, but I never really thought my brother and I were this much alike. He’s such a great person and so acclaimed athletically (in football and track). Because I couldn’t apply myself to his standards in athletics, I had to do it in academics. That’s where I could say, ‘okay, we’re equal.’ I can live up to his standards.”

Academically, she actually one-upped her brother, who ranked seventh in the class of 2016. Alexandrea was No. 1, the class valedictorian, and will study applied mathematics at Harvard.

“I always knew she was smarter than me, but the athletic prowess was up for debate,” Livingstone said with a proud smile. He just completed his sophomore year at Brown, where he was recently named a starting wide receiver for next season.

Alexandrea has won a lot and done a lot. That is why she became the fifth winner of the award that is named for Newsday sports reporter Marcus A. Henry, who loved sports and was a community leader. Henry died on April 1, 2014.

Harriott was elected captain of both the soccer and track teams. She was an all-county defender in soccer, earned all-county honors in the 300-meters in winter track and was versatile in spring track, competing in the 100, 200, 400, long jump, triple jump and relays. “She was always a short sprinter, but could do anything I asked of her,” Murphy-Vercillo said. “She was an important member of the team and a natural leader. She competes against herself more than any other person I’ve ever coached. She’s a fierce competitor.”

That extended, in a benign way, to her academics. Alexandrea admitted that towards the end of her senior year she did track the grade-point averages of her peers. “But the salutatorian (No. 2 student) is my best friend and the other people in the top 10 were in my AP classes and we’re so close,” she said. “There’s a greater force at play. We all know that we want to achieve and do our best. It’s competitive, but it was also loving.”

Music soothed their souls. “Usually in high school, siblings try to stay as far away from each other as possible,” Livingstone Jr. said, grinning. “But we went everywhere together when it came to the concert choir. We traveled to churches, to events, we sang at weddings and we practiced — Tuesday nights after school. It was a great experience that we were allowed to enjoy together.”

Alexandrea takes pride in providing joy to others, especially in a community she acknowledges has sometimes had its share of socio-economic issues. “It’s an even greater honor to be recognized with an award like this because of where I come from,” she said. “Some people might look at this place and say, ‘How can anybody live there? How can anybody graduate from there?’ I’m saying to them: It’s possible. A place like this is not perfect. But as I said in my valedictorian speech, ‘There should never be a place that’s perfect because then there’s no opportunity to get better or to achieve at a greater level.’ You want a place like this, where there are wise people who teach you so much and give you so much because they know you have to work harder than in other places. They give you the qualities you need to do well in this world. That’s something you should be grateful for.”

The district is grateful for Harriott. “She’s a beautiful representation of what this community is all about. Service to the community; leadership within the school, and academically good enough to have been accepted to Harvard,” superintendent Koenig said.

Harriott’s parents are especially proud that the brother-sister act they produced — they also have a successful older daughter, LeslieAnn — never seem to stop giving back or paying it forward. “It has made them better people because they know how to care about those around them,” Michele Harriott said. “We know that you can’t go through life on your own. No man is an island; you have to help the people around you. Not because they are worse off than you but just because you’ll make the world a better place by helping them.”

Livingstone Harriott Sr. added, “It’s not about athletics every time. It’s not about academics every time. You have to have a balance. That’s what we tried to instill in them. We tried to motivate them, whether it was sports or music. We’re all about family and community service. They really took those initiatives and ran with them.”