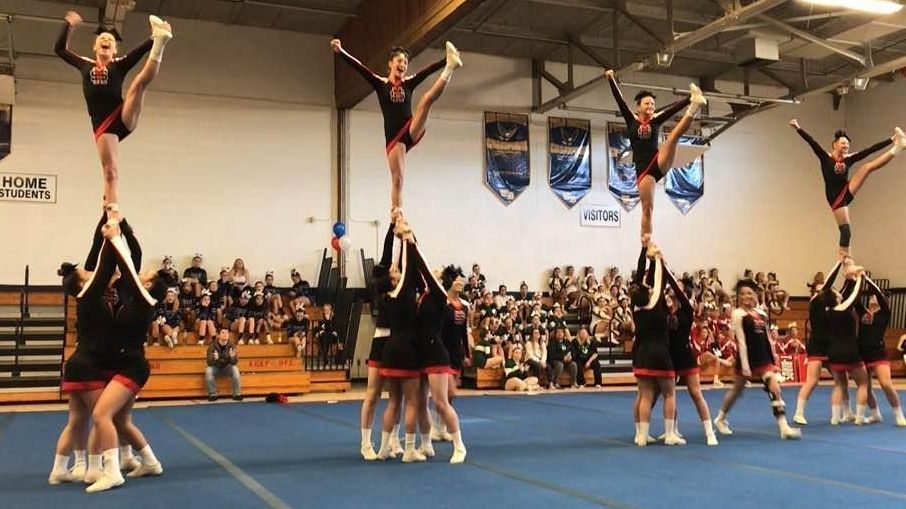 But senior captain Charlotte Fiordalisi — who underwent surgery to repair a broken nose — returned to the mat for the first time in more than a month Saturday and helped lead the Mustangs to first place in an eight-team meet at West Babylon.

“It’s unexplainable the joy I feel to be back out there with my team,” said Fiordalisi, whose team score 91.05 in the large-school division. “They worked their hardest and supported everybody. We always motivate each other and that’s how this team works. I’m just so happy to be out there and I missed it a lot, so this is a fun day for me.”

Coach Kara Bochicchio, noting the her team’s list of injuries, was glad to see Fordalisi hit her elite stunts.

“I think we by far have one of the hardest divisions, so we knew what everyone else had from week to week,” she said. “We’ve gone through a lot of injuries at this point, so really overcoming all of those injuries and fighting to get back on top was something that we needed to drill into their heads that they are capable of doing this. Building their confidence up was the thing that they needed in order to win today.”

Senior co-captain Alexa Tabile said regardless if the team finished in first or last, she was proud. “I’ve been on the team now for three years and this is the closest I’ve ever felt to a team before,” Tabile said. “It’s not like we do forced team bonding or anything like that. We just automatically click. We love to motivate each other.”

In the medium division, the Rocky Point Eagles, winners of all seven Long Island competitions this season, not only prepare for the mat with complex, choreographed moves, but always sleep with their hair curlers the night before a performance.

With loud cheers from the parents who made the trip, the Eagles took first in the medium division with a score of 92.8. “We had a couple of sick kids, so we were a little unsettled coming in,” coach Anna Spallina said. “But these kids really know how to perform and they took that mat by storm. They got what they deserved today.”

“Sick or not, they show up, they give everything they have and they just push it out,” assistant coach Arianna Scanlon said. “We had another hit performance, which to us, is more important I think than even winning. We want to hit the routine, because that’s the difference at nationals. Hitting the performance is the most important thing.”

The Eagles, led by seniors Julieanna Joy and Lauren Utting will be joining Mt. Sinai and 26 other Suffolk teams in Orlando Feb. 10-11. Hauppauge won session 4 and West Islip session 3 in the small divisions.