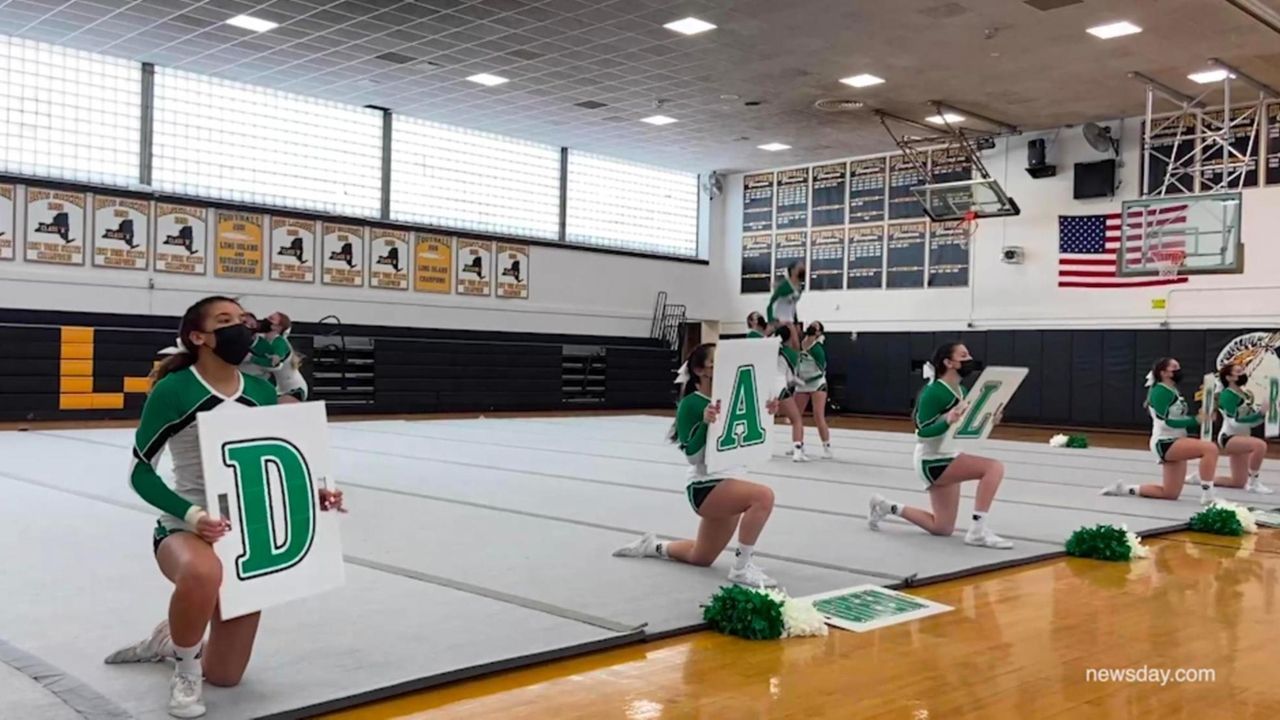 Lexi Goodman of Massapequa and Samantha Cella of Seaford discuss how thankful they are to be back on the mat with their teams. Credit: Newsday / Julia Elbaba

They came into the gym one after the other and performed their routines. They were 31 cheerleading teams strong and performed as if the place was packed.

They waved to no fans, smiled to no adoring crowds and screamed out their cheers for only the judges and coaches to hear. They built human pyramids into the rafters, tumbled across the mat and put together amazing individual and team stunts all day Saturday at Wantagh High School's main gym.

And with as few as 10 practices, wearing masks, and following all the safety protocols they rarely missed a beat.

"I’m so proud of all of the cheerleaders in Nassau County for coming out and giving it their all and so thankful to Wantagh for putting on the in-person competition," said Seaford coach Lisa Ferrari. "Virtual competitions don’t work, it’s like practice. This was a really well-done event and it felt like a cheer competition — without the wild crowds."

Ferrari credited an incredible overall team performance for the win.

"We changed our pyramid yesterday and changed a few flyers out of the lineup," she said. "And considering the length of time we had to practice with only 12 practices I thought we were awesome. We’re still trying to hit some super elite stunts, but our tumbling was strong. We hit a perfect routine until our final pyramid."

Captain Samantha Cella, the main base, was proud of the routine despite putting on a show with no audience.

"We did really well, it was our routine from last year," she said. "We waited so many months to be here, counting down the days for this moment. A gym with no fans is very different, you really have to focus."

Teammate and co-captain Kelsey Gil, the side base, said the team really came together nicely for the first competition of the season.

"The squad is so special and worked hard for this," she said. "And to have the chance to compete in my senior year is just great."

Peter Cardone, the director of athletics for the Glen Cove District, attended the event and was a beacon of support for all 31 teams.

In football there is a "Get Back" coach on every sideline, who screams for the players to get back behind the safety stripe throughout the game.

Cardone became the guy that congratulated every team as they were removed from the gym after every performance.

He said, "Great job, girls" multiple times to every team as they exited the mat area. His positivity was noticed by all.

"It was amazing to see them all smile and get out there and perform," Cardone said. "It was a real positive event — I loved it. Tip of the cap to the Wantagh staff."

That kind of infectious attitude resonated in the gym.

"We had a few injuries and had to quarantine a few girls so I was really proud of the way we pulled it together," said Wantagh coach Jaclyn Bonlarron. "Hosting was different this year, less stressful with no spectators. I do think the crowd energizes the teams and has an impact on the scoring. The girls really needed to focus on routine after having so much time off. It was nice to be out there."