A good memory is an obvious benefit for any serious competitive cheerleader. Chants, moves, rotations and marks are all very important parts of the routine and, having success without being conscious of those points is a significant challenge.

A short memory is also a good trait, though. Just ask MacArthur. After two falls in the beginning of their routine at the Nassau cheerleading championships Sunday morning at Hofstra, they had to move on, adjust and figure out a way to win despite the stumbles.

That’s when the cheering came in.

“We killed it in our cheer,” Gianna Tannazzo said. “We knew that we had to turn it on after the little mess up we had in the beginning, but we finished really strong, so that’s what made up for everything.”

They were rewarded handsomely for it, winning the Division I small team championship with 89.25 points. It was their second consecutive county championship and qualifies them for the state championship, scheduled for March 7 at the Rochester Institute of Technology. 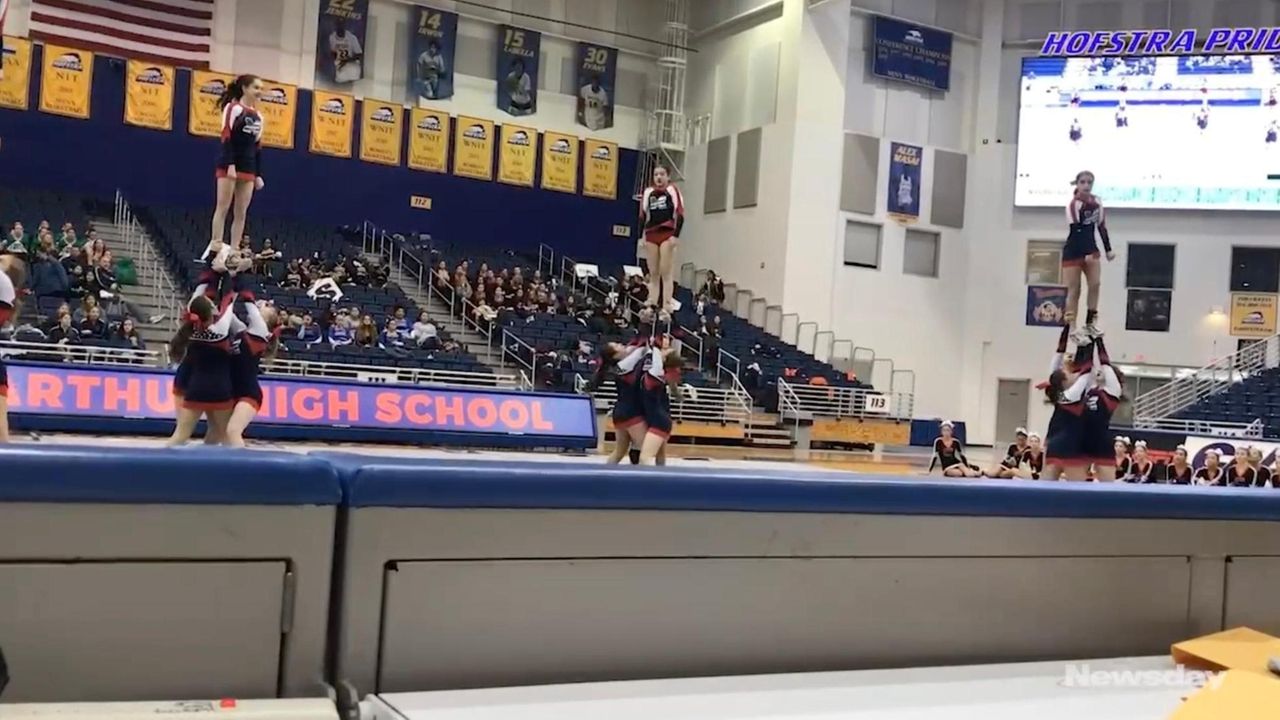 “We definitely had a reputation that we needed to keep and, especially as a senior, I wanted my last one to be a good one,” Tannazzo said.

MacArthur was aware that slip ups happen, especially during a high-stakes competition. The key was knowing how to get past them.

“We talk about the what ifs?” Callie Koeppen said. “What if the pyramid falls? What do we do? We know exactly how to get back up and encourage each other.” 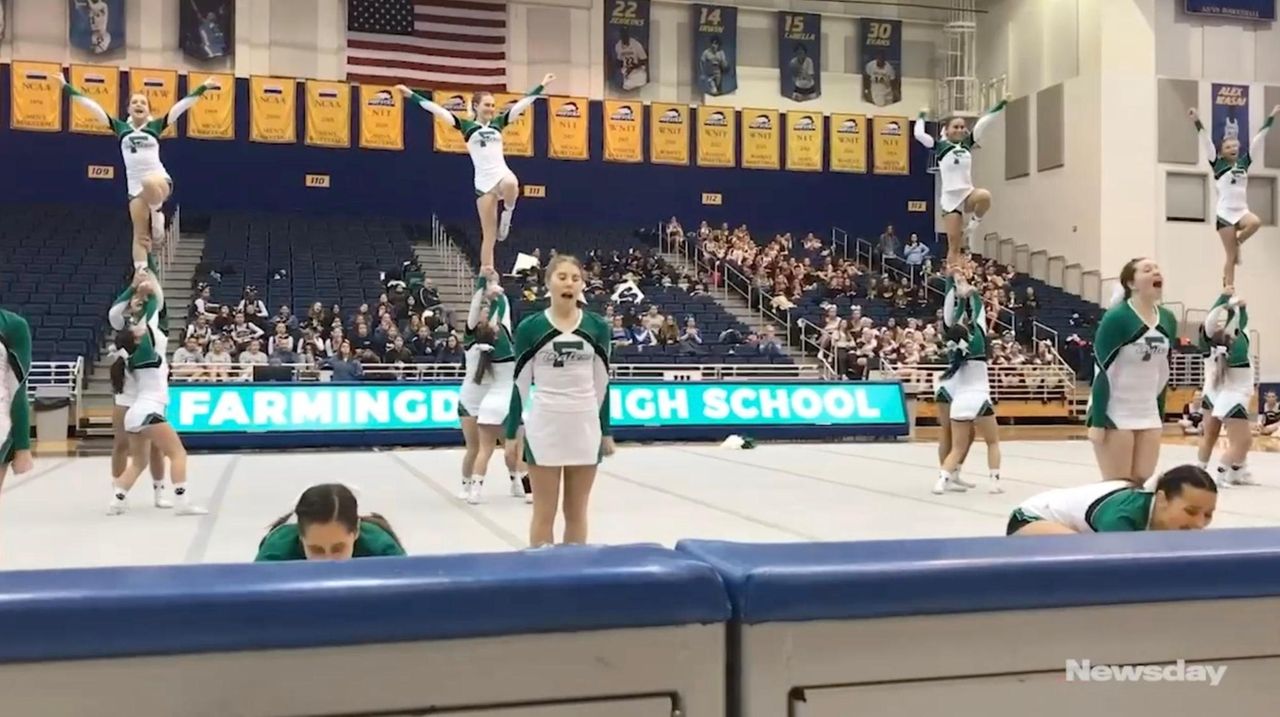 Farmingdale won the Division I large team championship with 90.05 points. After the Dalers finished its routine, the final of the 11-squad morning session, they exploded with joy, like no other team had. They knew they nailed every moment of their routine.

“We felt the energy in the room,” Kiersten Hacker said. “So we knew that we hit all our skills and we were so proud of ourselves.”

Hacker added: “Our energy was really good. We kept all our stunts in the air, we hit our tumbling and we really just felt so much pride and energy out on the mat and put forth our best effort. We hit everything to our best capacity.”

That kind of precision doesn’t come by accident. Hacker’s teammate, Gianna Costa, said that the need for perfection was known during some grueling practices throughout the week. They knew that if everything was in tip-top shape, the championship, and the jubilation that came with it, would be theirs for the taking.

“It was just as perfect as we wanted…We knew we had to hit it,” Costa said. “We fought for the feeling.”

Now, with the stakes even higher and a state championship just a long bus ride and a strong routine away, Farmingdale has no plans to let up.

“We can’t wait to go prove ourselves up there,” Hacker said. “….I think it’ll be pretty stressful, but we’re going to keep pushing through, keep working hard, and try to prove ourselves again up in Rochester.”

Freeport won the Division II co-ed championship with 91.8 points. The Red Devils went to the state championships two years ago as part of the all-girls division, but this is their first time qualifying as a co-ed squad, team member Dashna Cadet said.

Freeport, which was the last team on the mat in the afternoon session and had to watch 10 teams compete before them, kept its energy up with a lot of positive thinking and . . . even more pixie sticks.

“We all just put everything together,” Cadet said. “We had the energy that we needed on the mat and the confidence that we needed in each other and ourselves.” 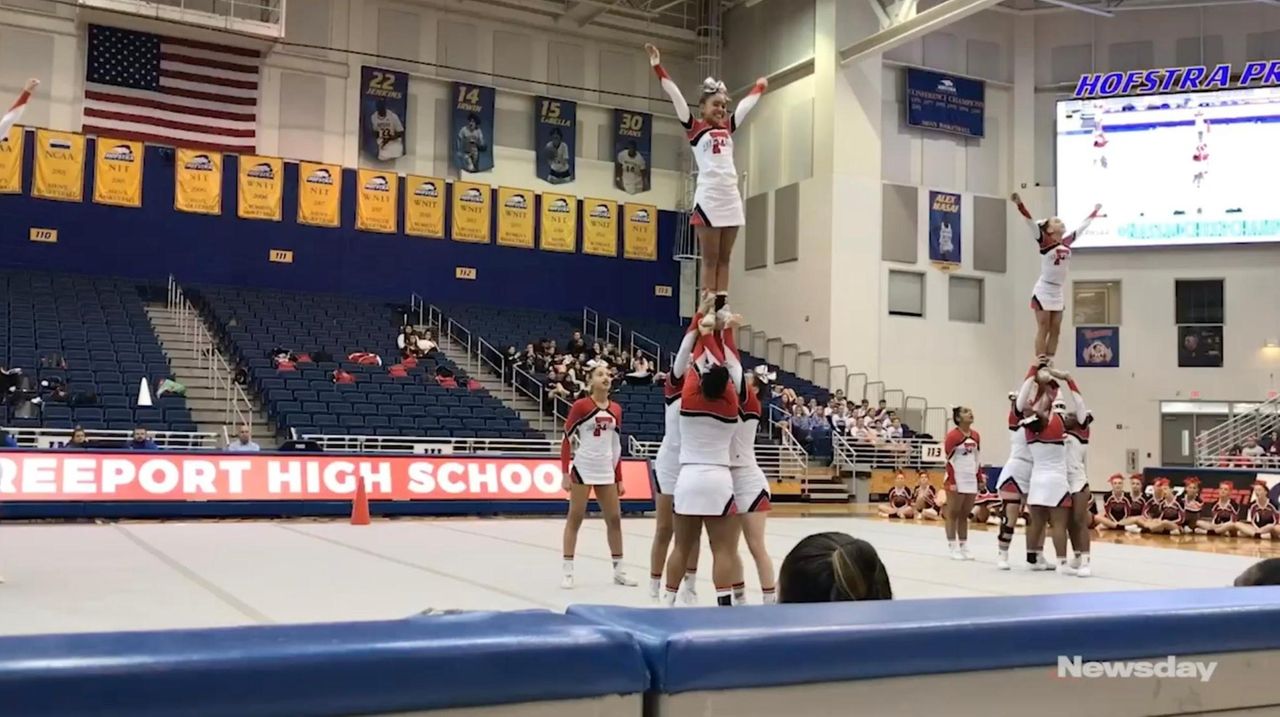 Anthony Peralta was on junior varsity last year, but said it’s a whole different feeling under the bright lights of varsity cheerleading.

“Our goal is to do what we did here, hit a clean routine over there,” he said of next week’s state championships. “That’s all I care about, really.”

Selin Bektas went with Freeport to the state championships two years ago, but only as an alternate and did not get on the mat. That will change next week.

“This time, I actually get to compete, so it’s a whole different feeling,” she said. “And I can’t wait.”