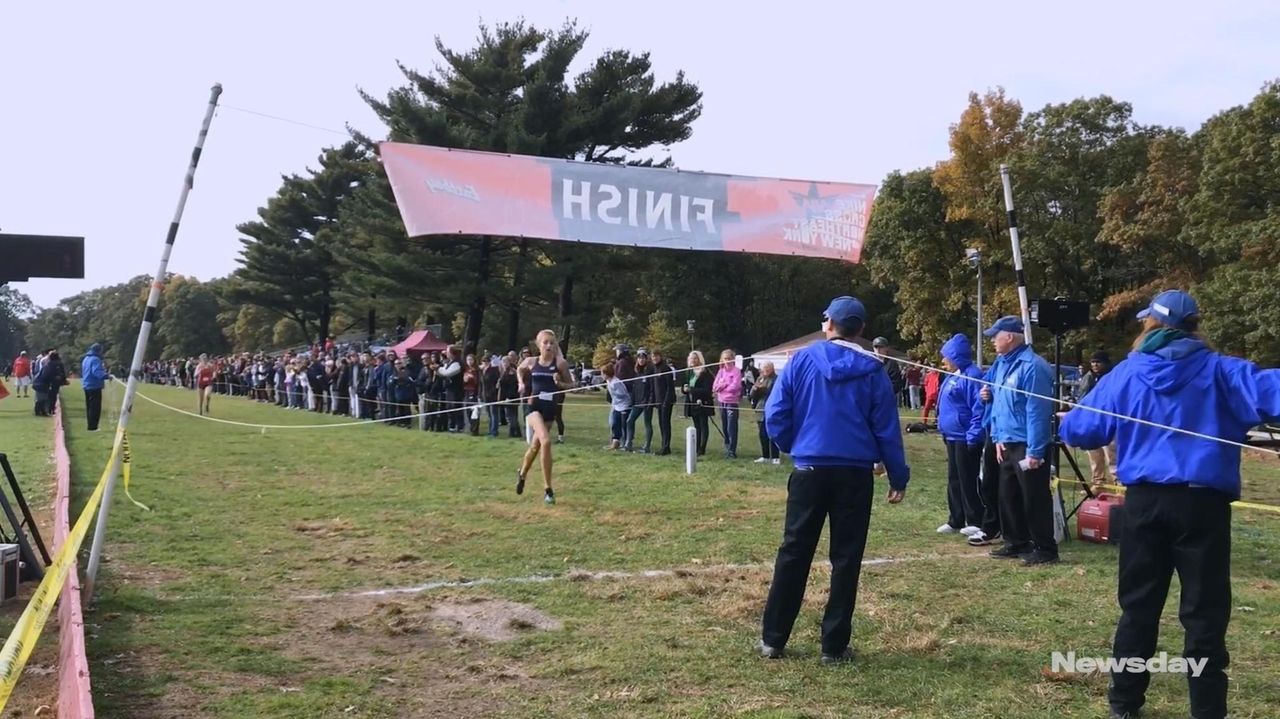 Nassau Class I, II and III boys and girls cross country winners on Sunday talked about what it was like for them to win their respective 5k races at Bethpage State Park. East Meadow's Bryan Villafuerte won the boys Class I championship in 16:46.37 and Andria Scaglione captured the girls Class I championship in 19:42.92. Other winners were Manhasset's Christopher Courts and Angeline Caamano in Class II and North Shore's Jack Rosencrans and Valley Stream South's De Anna Martin in Class III. Credit: Newsday / Melissa Kramer

“It feels nice,” the senior said about his three-peat. “ . . . Hopefully the Golden State Warriors don’t three-peat. It’s nice. I came into this sport as a ninth-grader and had no idea what I was doing and I learned to love the sport and I learned to give it my all, and it’s paid off for the past three years, definitely. I’m really thankful and humbled by that.”

“I’m excited to represent Nassau County, Long Island and I hope one day I’ll have a lasting impact here,” he said. “Running is definitely an example of how to push yourself, set goals, try to break those goals, and that’s kind of how life is — set goals, break goals and then set new ones, and that’s a great way of living.”

For the girls, Manhasset’s Angeline Caamano only ran in four races this season, but Sunday’s 5K was her best.

After battling a right hamstring injury throughout the end of spring and summer, Caamano won her first Class II championship in 19:31.73.

“I felt really good,” Caamano said. “This is my first county title, so I’m so excited about that. It was a really tough race with [South Side’s] Carly Woefel because she is amazing, so to be able to come out just ahead was really good.

“I came into this race not looking to win, just looking to race, and I think winning came along with that, so you really have to know how to be competitive, especially in close races like this.”

Valley Stream South’s DeAnna Martin pulled ahead in the last 400 meters for the Class III girls title in 19:54.79. The senior will celebrate her 17th birthday on Tuesday and only started running cross country in her sophomore year.

East Meadow’s Bryan Villafuerte took the Class I boys title in 16:46.37, two seconds in front, despite pushing through stomach cramps and a lingering right hamstring injury.

Oceanside’s Andria Scaglione crossed first in the Class I girls race with a 19:42.92.

CHSAA results. Two of Long Island’s top runners won in the CHSAA championships held at Sunken Meadow State Park Sunday. St. Anthony’s Matthew Payamps, the top runner on Long Island according to the latest speed ratings on tullyrunners.com, won on the 5-kilometer course in 16:55.45. Teammate Brendan Dearie was second in 16:57.67.