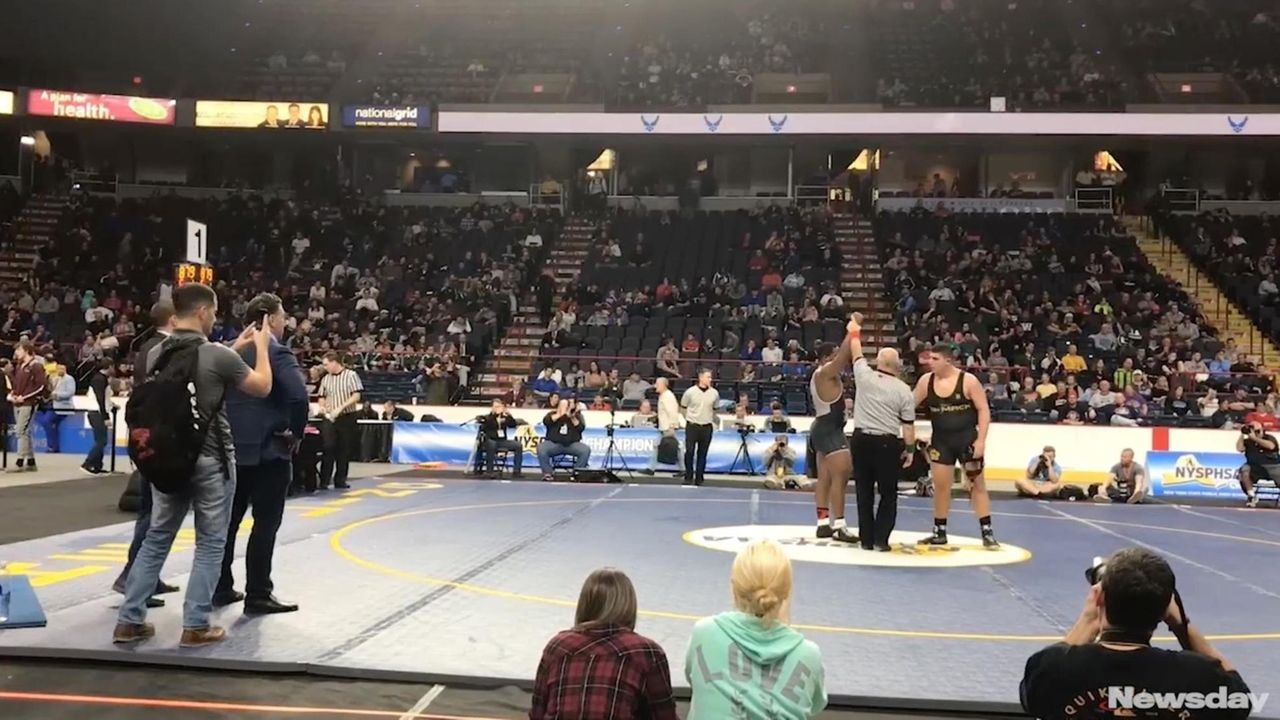 ALBANY — Amityville’s Deonte Wilson had just won the 285-pound state wrestling championship late Saturday night. But all the senior thought about was his family and especially his mother, Latoya, back home.

“I was stressing out my coaches,” said Wilson on the floor of the Times Union Center. “They weren’t hurrying up to get my phone out of my bag.”

Saturday was a special time for Wilson and his family. Not only was he wrestling for a state Division I crown, but it was mom’s 42nd birthday. Just a few minutes after winning his title, the senior contacted her via FaceTime.

“I told her happy birthday first,” Wilson said. “Then I told her, ‘I’m a state champion.’ ”

So what was her reaction?

“She was overjoyed,” said Wilson, smiling. “She dropped the phone.”

Having a state champion son, can do that to a parent.

“It means a lot to me. It really means a lot,” said Wilson, fighting back emotions. “It’s big for the school and for Amityville . . . We are trying to get the [wrestling] program going again, and when the kids see me it means a lot to them.”

The top-seeded Wilson defeated the No. 2 seed, Commack’s Joey Slackman, in the final, 5-1, and became Amityville’s first champion since Uthman Jackson (140 pounds) in 2001.

“This is what I have been working for since fifth grade,” said Wilson on Saturday morning after his 6-0 semifinal win against Smithtown West’s Tim Nagosky.

Wilson’s thoughts went back to what motivated him as a younger wrestler.

“An alumnus came back with a Suffolk County [state tournament] singlet,” Wilson recalled, “and [Amityville head coach Greg] McCoy was like, ‘That’s what all you guys should want.’

“I was like, ‘I want that too. I want to be part of the Suffolk County [state sectional] team. I want to go upstate and represent Amityville.’ ”

The Warrior did that last season when he went 36-2, including a Suffolk title. He earned a shot at the 285-pound state title, but lost a tough 2-1 decision against Fairport’s Billy Bolia.

“I keep that memory with me to remind me that I want to be better,” said the 6-2, 280-pound Wilson. “I want to dominate. I don’t want to be in close matches like that.”

He rarely was this season. Wilson ends his career with a record of 166-23, including a 31-2 mark this season. His only two losses were a pair of forfeits during the Eastern States Classic on Jan. 12-13. Wilson’s grandfather, Oliver Vineyard, passed away and he missed the event.

“The last thing he said to me was to take care of my mother,” Wilson said. “It was hard watching him suffer.”

But Wilson was all smiles late Saturday after winning a state crown.

“It’s not just for me,” said Wilson, as coaches Mike Albano and Billy Maisel looked on. “It’s for Amityville, too. It’s for my parents and my grandfather.”