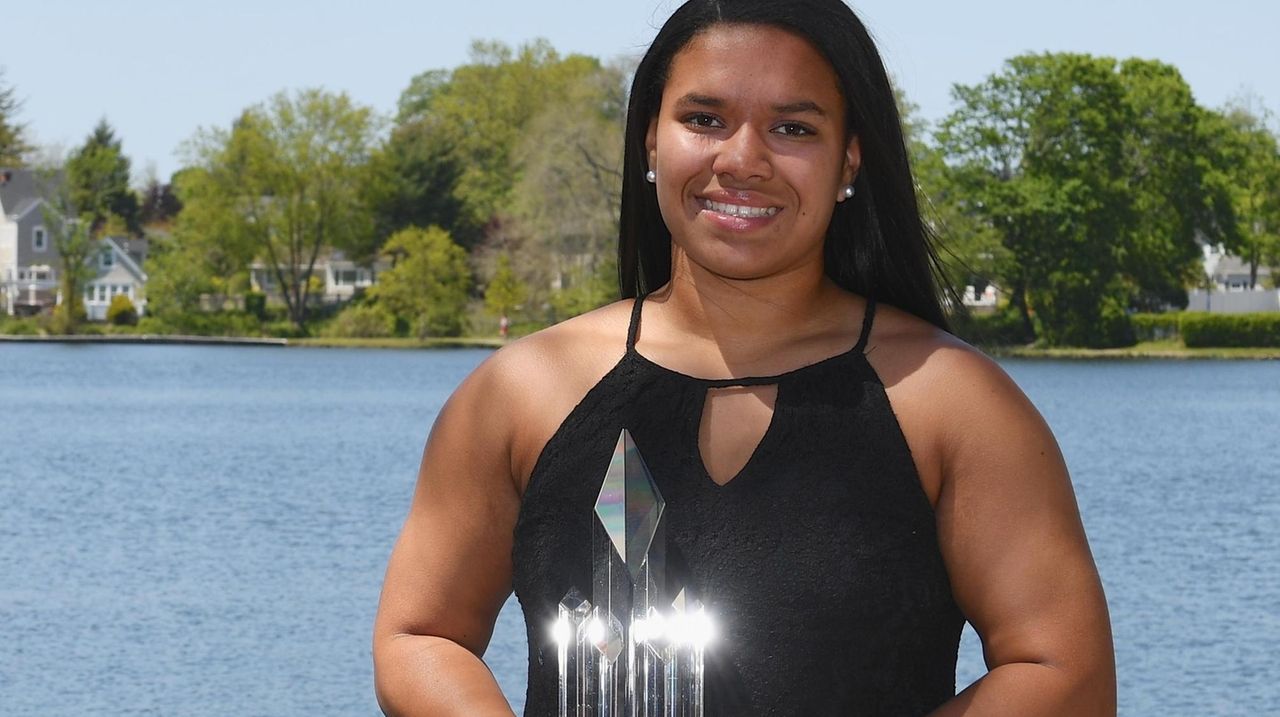 Babylon senior Emma Ward was named the winner of Newsday's Marcus A. Henry Award for 2020. This award, in memory of former Newsday sports reporter Marcus Henry, is presented annually to a Long Island high school student who excels in the classroom and in athletics and also displays great leadership.  Credit: Danielle Silverman

Emma Ward is impressive in every way. The Babylon senior is academically accomplished, an outstanding three-sport athlete in soccer, basketball and lacrosse, and dedicated to her community.

Her resume is loaded. And it’s hard to say which attribute is most impressive in her skill set.

Is it the straight-A average at the top of her graduating class or is it the athletic prowess that has her headed to Syracuse University to play Division I lacrosse?

Or maybe what jumps off the resume is Ward's involvement in the 20-plus clubs in school and her community.

“She’s all-in on everything in her life,” said Mike DeJoseph, the director of athletics in the Babylon School District. “Whether it’s academics, athletics, family, friends or community service, Emma has found a way to commit herself and get the job done. She’s driven to achieve in all aspects of her life.”

Flanked by her parents Maurice and Jaqui, Ward was all smiles as she accepted the crystal award on Thursday at Babylon’s Argyle Lake.

The award is named in memory of Newsday reporter Marcus A. Henry, a man who loved sports and also was a community leader and a dedicated journalist. He died April 1, 2014 at the age of 41.

Ward was chosen from an elite group of nine finalists.

“I am extremely humbled to be accepting this honor,” Ward said. “Mr. Henry lived a life filled with love and commitment. I was in shock when I learned that I was chosen. Any one of those finalists could have been selected, they were all so deserving.”

Ward’s success can be directly linked to her ability to prioritize and balance a packed schedule. She has very little down time.

"She’s a well-balanced person and completely understands where she needs to be and what she needs to do all the time,” said her father, Maurice Ward. “She prioritizes very well and truly understands the importance of giving her best in whatever she chooses to do. She’s so driven in academics, athletics and clubs and at times we need to pull her back a bit.”

Ward’s mother, Jaqui, said she recognized early on that her daughter had many special qualities to be successful.

“I’m extremely proud of her work ethic,” she said. “She gives a lot of her time to help others and still manages to keep herself focused on her goals. As I learned about Mr. Henry and what he was all about, I was completely humbled that she was chosen.”

Ward credits her parents with the strong foundation that has enabled her to succeed.

“My parents mean the world to me,” she said. “From the beginning and through the end they’ve always been by my side. We’ve had the ups and downs through my injuries and they were always there for me. I’m fortunate to have them in my life. Not every kid has that; I would never take that for granted.”

Ward is most proud of her contributions in the community. She joined Nations United Women’s Lacrosse, a club based on diversity.

“We see it all the time that lacrosse is not a diverse sport,” she said. “And girls from all ethnicities come to play lacrosse in Baltimore and reach out into the community. We’re African American, White, Latino and Asian girls, all brought together to play as one. We made baskets for moms in need and filled them with diapers and wipes for their families, who are less fortunate. It was fulfilling.”

“We went to a local nursing home in Babylon and spent the day making people smile, playing bingo and serving snacks,” Ward said. “The interaction was a great experience. It’s the best feeling in the world, knowing I was able to give back.”

Ward is also a youth coach in lacrosse, soccer and basketball. She tutors Social Studies, English and Science. Her school activities include Safe Halloween, Super Bowl of Caring, Food Drive and the Jingle Walk. And Babylon Buddies, helping students with special needs, is dear to her heart.

“It’s unbelievable all the clubs she’s involved with,” said girls lacrosse coach Olivia Cabral. “She’ll be late to practice running from a club and we understand. She’s passionate about the Babylon Buddies program where she works with students with special needs.”

“My favorite club in school was Babylon Buddies,” Ward said. “I had a cousin in the program and I loved working with those kids. I will pursue the InclusiveU Club at Syracuse.”

Ward, a fan of the "Criminal Minds" TV series, plans to study forensic science at Syracuse.

Ward, who had 300 career points in lacrosse, also made 12 saves in Babylon’s 2-1 win over Carle Place to claim the LI Class B girls soccer championship.

“She had an authoritative presence in the goalkeeper position,” said Frank Mancuso, the Babylon soccer coach. “I don’t think we’d have accomplished it without her.”

Ward offered some keen advice for high school students:  “Never give up, there’s so many ups and downs in life,” she said. “I love this saying, ‘Rock bottom will teach you lessons that the mountain tops never will.’ ”

Babylon's Emma Ward wins Newsday's Marcus A. Henry AwardThis award, in memory of former Newsday sports reporter Marcus Henry, is presented annually to an LI high school student who excels in the classroom and in athletics, and displays great leadership. Marcus A. Henry Award past winners: Where are they now?Catching up with the six previous recipients of the award.