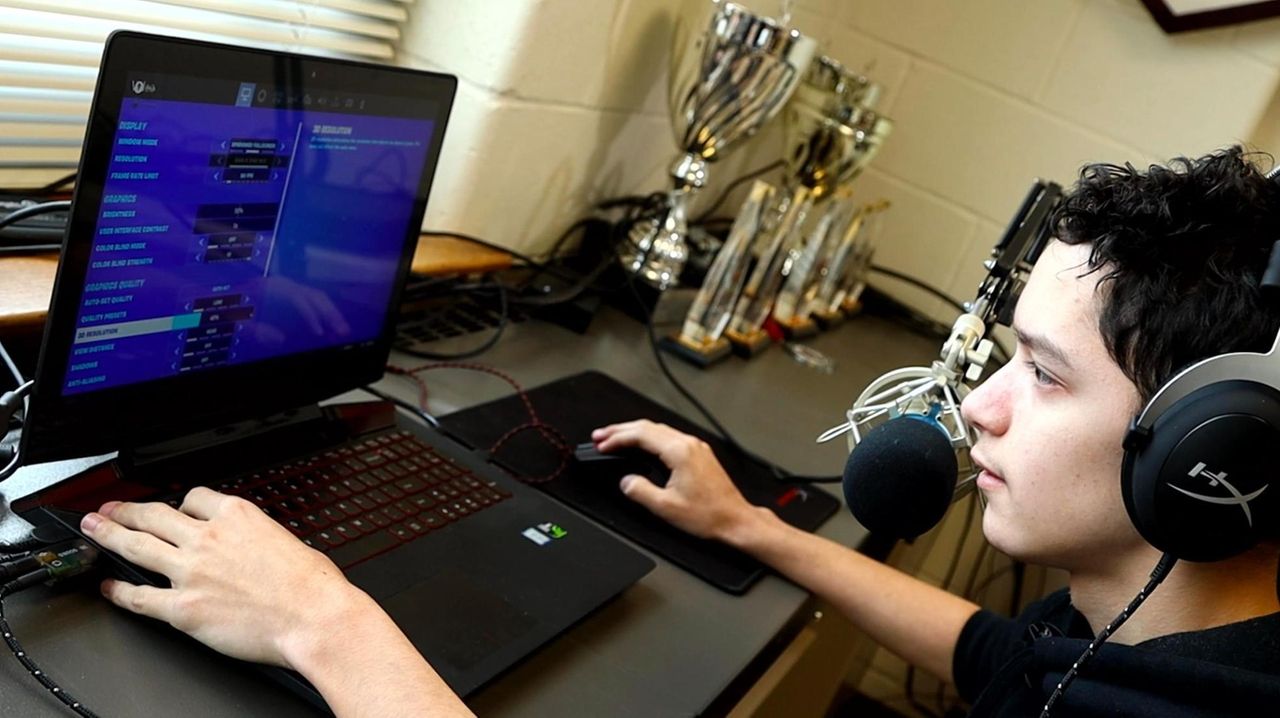 Bay Shore sophomore Daniel Garcia signed a contract with Microsoft to stream and play Fortnite on the company’s new site, Mixer. Garcia's contract requires him to be on at least 15 hours a week while still going to school and with regular teenage obligations such as homework and studying. Credit: Newsday

Daniel Garcia sits down at his home computer every weekday afternoon at 5 o’clock.

Like many 15-year-olds, the Bay Shore High School sophomore enjoys video games and, once he’s done with his homework, he logs on to play for a few hours. But, unlike most kids his age, Garcia’s game-play isn’t just for fun. He has a job to do.

Garcia is getting paid to play video games.

Esports is a form of competitive video gaming that has grown into a billion-dollar industry over the past few years. There are professional video gaming leagues with huge followings.

In November, Garcia signed a contract with NRG Esports, a professional esports organization based in Los Angeles that is backed by former professional athletes such as Alex Rodriguez and Michael Strahan.

Garcia took the next step in his gaming career in January when he signed a deal with Microsoft. Garcia said both of his contracts include non-disclosure agreements, so he is not allowed to say how much he is being paid.

"The feeling of having a contract and legally signing my name, the thought of it all, it’s crazy,” Garcia said. “At my age, usually people aren’t signing contracts. It’s mind-blowing and I still can’t grasp the whole idea of it.”

Garcia's career began, in part, because of his participation on the Bay Shore High School esports team. Bay Shore was among the first schools on Long Island to start a team and has over 120 students playing games such as "Overwatch," "Rocket League" and "Super Smash Bros."

Garcia runs the team’s social media and is serving as the in-game commentator when Bay Shore competes against other schools.

Last year, Microsoft awarded Bay Shore the Empower Possibility Grant – providing the team 10 gaming computers and five Xbox Ones – and Garcia kept in touch with people in the company. Garcia had been playing on another streaming service, Twitch, and had over 2,000 followers when Microsoft offered him the chance to join Mixer.

Jon Kefaloukos, who worked for Microsoft's Gaming and Esports division, saw Garcia's potential and was instrumental in signing him with the company.

"Daniel’s a great kid," said Kefaloukos, who is now a sales executive at Microsoft. "I think he’s the next generation as a streamer, entertainer and personality. As a young kid and competitive player, I think he’s going to be working in esports and gaming one day and doing great things."

Garcia said building a brand online isn’t easy. Streaming requires the player to be on camera, interacting with viewers and playing, while providing an experience people want to watch. Garcia admitted that when he started, it could “be very demotivating because nobody’s there watching,” but he has started to find his niche.

Garcia is rarely without a smile, an enthusiastic gamer who said he loves the chance to interact with people from around the world.

"It's crazy because sometimes there'll be somebody in my chat and it's like 2 a.m. where they are, but it's only 5 o'clock for me," Garcia said.

He added that streaming has helped him discover an online community where, “once you find your place it’s almost like a family.”

Garcia’s family has played a big role in his gaming success. His twin brother, Randy, is also on the Bay Shore esports team.

His father, Michael Garcia, admits that like a lot of parents, he had his doubts about his children spending so much time playing video games.

"It’s been kind of an adjustment for us," Michael Garcia, 43, said. "Growing up and playing video games, that was kind of frowned upon in my family. We were encouraged to go out and ride bikes. Back then, it wasn't a career path. Now that's completely changed."

Michael Garcia, who works in information technology, serves as one of the moderators on Daniel's Mixer channel, keeping an eye on comments and viewers.

"It’s pretty wild," Michael Garcia said. "That’s the only way I could describe it. It’s just amazing how these opportunities are now coming in with esports."

Daniel Garcia streams several hours a day – his Microsoft contract requires him to be on at least 15 hours a week – while still going to school, with regular teenage obligations such as homework and studying. To that end, Garcia’s ability to set his own schedule is something he said he relies on.

“In the beginning it was hard, but I’ve worked it out and set a schedule,” Garcia said.  “I can do this while managing school and my outside life.”

Garcia said he hasn't really thought about what he will do after high school graduation. So for now, he's just enjoying his life as a high school student and paid gamer.

“Every day when I start streaming, I can’t believe it,” Garcia said. “I call it a good mistake because one day I was messing around and was like, let’s see what happens, and it’s been all positives from there.”