The first days of high school are rarely easy. They were especially hard on Favour Okodogbe. The events of one Spanish class during her first week at St. John the Baptist High School proved so upsetting that she emerged from the classroom and broke down in tears.

An academic standout her whole life, Okodogbe twice was promoted to skip a grade and arrived at high school as a 12-year-old freshman. She was prepared for the rigors of the classroom, but not the emotional trials of being a stranger trying to fit in. She never anticipated her exceptionalism would be greeted with derision and suggestions that she’d be better off back in eighth grade.

It was in that hallway outside class that Sister Beth McGarvey, the school’s social worker, came upon Okodogbe and gifted her a lesson that would endure.

Now, with four years of high school behind her, the idea that anything is beyond Okodogbe’s reach seems unfathomable.

"I was shocked that she was only 12 years old, and I still have the notes from meeting her in the hall," McGarvey said. "She was not timid, but polite and finding her way. I wanted her to understand that she was not weird, but rather extraordinary in having the [intellect] to skip two years of school. There are a lot of jealous people in a high school environment and she had something to be [envied].

"In four years, she really became something," McGarvey said. "She found her voice. She advocates for others. She is a leader in our building."

Okodogbe is this year’s winner of the Marcus A. Henry Award, given annually by Newsday to a Long Island high school athlete who excels in the classroom, shows great leadership and gives back to the community.

Henry was a sportswriter for Newsday until his death on April 1, 2014, at age 41. In addition to being a well-respected reporter, Henry performed many services for the community in Baldwin where he grew up and was an active member of the Union Baptist Church in Hempstead, where he lived.

Henry was the captain of the Baldwin High School football team and graduated in 1991. He played one year of football at Temple University before his playing career was cut short by a knee injury. 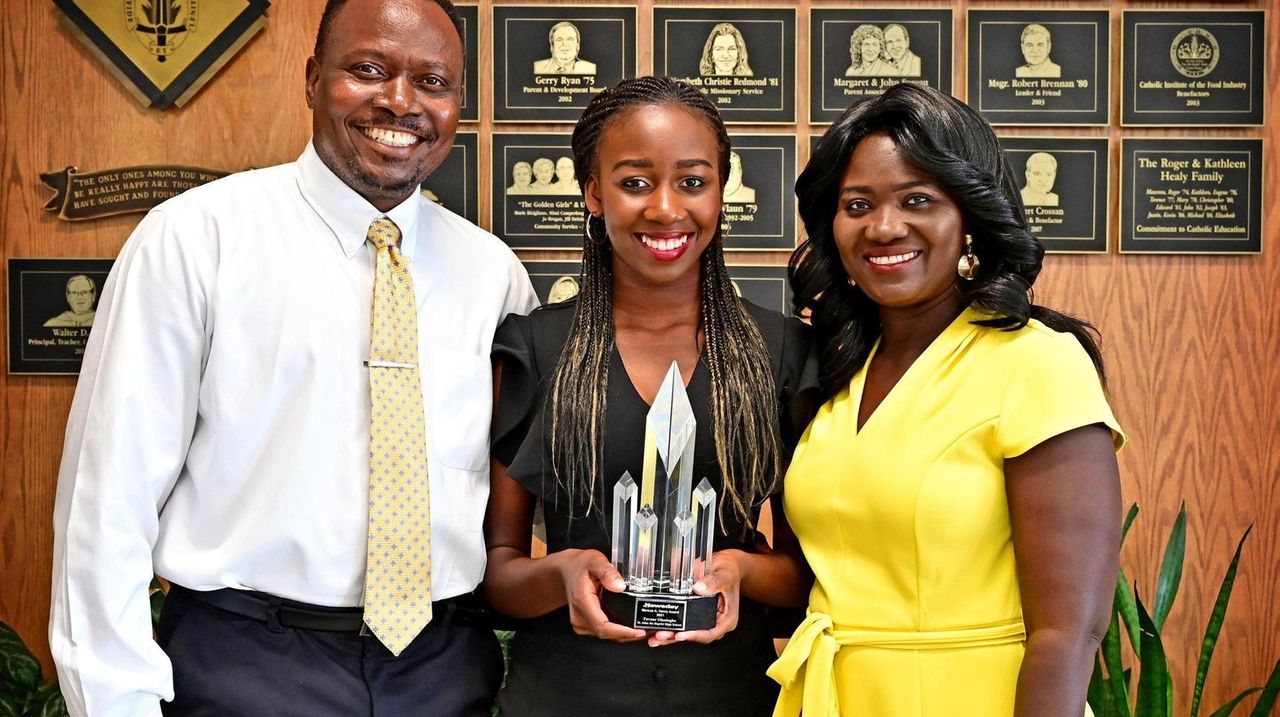 Newsday sports editor Hank Winnicki said Henry "had a quiet grace about him that we all still miss."

"This award means a lot to us at Newsday because it emphasizes the qualities that are most important in life," Winnicki said. "The candidates are more than just great athletes, they are great people who lead by example and dedicate themselves to making the world a better place. Marcus made a difference in so many people's lives [and] this award carries on that legacy in his name."

"On the outside there is a humble dignity to Favour while inside there is an unquenchable competitive fire to succeed," said Newsday high school sports editor Gregg Sarra, who presented the award to Okodogbe in a ceremony on Wednesday night. "In seeing her and the way some 25 members of her family came out to see her get the award, you could see that she comes from a caring and supportive family that gives her the foundation to succeed."

Okodogbe, the oldest of three children born to Nigerian émigrés Victor and Maryqueen Okodogbe, views her life with the perspective of growing up with self-made parents who had few advantages. Both now minister at Mount Zion Gospel Tabernacle in West Babylon.

"They taught me that we make our opportunities through our own hard work," she said. "I thank them and I am grateful to God for every opportunity I’ve gotten. I don’t want to let any of them go to waste and so I always try to apply myself."

Swimming was a big part of her upbringing and thus joining the high school swim team was a natural, even though she would be competing against older and more physically developed swimmers. There, too, she emerged and ultimately was named a CHSAA All-League three times. She cut her time in the 100 backstroke nearly five seconds this season to 1 minute, 06.58 seconds, trimmed her time in the 200 individual medley by four seconds to 2:31.52 and used her versatility to fill a number of roles on the various relay teams for the Cougars. This fall she will be on the women’s swim team for the Division III Beavers.

"I have been coaching for 18 years, and you come across some exceptional people," St. John the Baptist girls swimming coach Dawn Kelly said. "This young lady is one of them. Look at her family [and] what she accomplished at such a young age. She is humble, always smiling and is amazing in every way."

Okodogbe also is a person of faith who sings and plays the piano during services with her parents' congregation, teaches adult bible school and does an assortment of volunteer work. She also functions in a leadership role at the church’s women’s empowerment group.

She got the idea for her book during the coronavirus pandemic while ruminating at the Okodogbe home in Amityville about the course of her life. In conversations with her parents, she realized they had taught her to embrace school and learning in a way that so many others don’t "and that if they learn it at a young age, they will carry it with them through their lives and it will lead to success."

"I had help from them at every step and not everybody does," Okodogbe said. "Kids need to have the fundamentals going into school so they will love learning like I do."

"A Workbook Just For You" is written for children about to go to kindergarten or preschool and seeks to familiarize them with numbers and the alphabet and reading. The 68-page paperback from Newman Spring Publishing came out on Jan. 4.

Her leadership qualities were not instinctual, but rather had to be learned. Once they were, Okodogbe became a great ambassador to many at St. John the Baptist.

When she was feted for the swim team’s Senior Day, junior Kristanna Petrillo said, "You were the first one to go out of your way to talk to me [and] you have always been there to give me advice . . . and wise words. Whether I was sitting alone in the cafeteria before practice or sitting alone on the bus, I could always count on you to come talk to me and make me feel included."

McGarvey said that in recent years as simmering racism in the country became more vocal, other students of color at St. John the Baptist sought Okodogbe out for advice when they were confronted with it. On one occasion, Okodogbe brought a pair of students to McGarvey for assistance in coping with it. "Advocating for students who don’t yet have a voice is just one [example] of how she became a leader," McGarvey said.

Asked to look back on her journey from a weeping 12-year-old to all she is now, Okodogbe replied, "Where I used to only want to blend in and not stand out, I now see that it’s all right to be different and use that to be an example for others who are afraid to stand out . . . I hope that can be part of the legacy I leave behind."

As to what lies ahead for the industrious and motivated Okodogbe, she was asked if maybe she is the type of person who could appear on the television program "Shark Tank."

"Maybe one day," she said, "hopefully as one of the Sharks."

This award, in memory of former Newsday sports reporter Marcus A. Henry, is presented annually to a Long Island high school student who excels in the classroom and in athletics, and also displays great leadership.