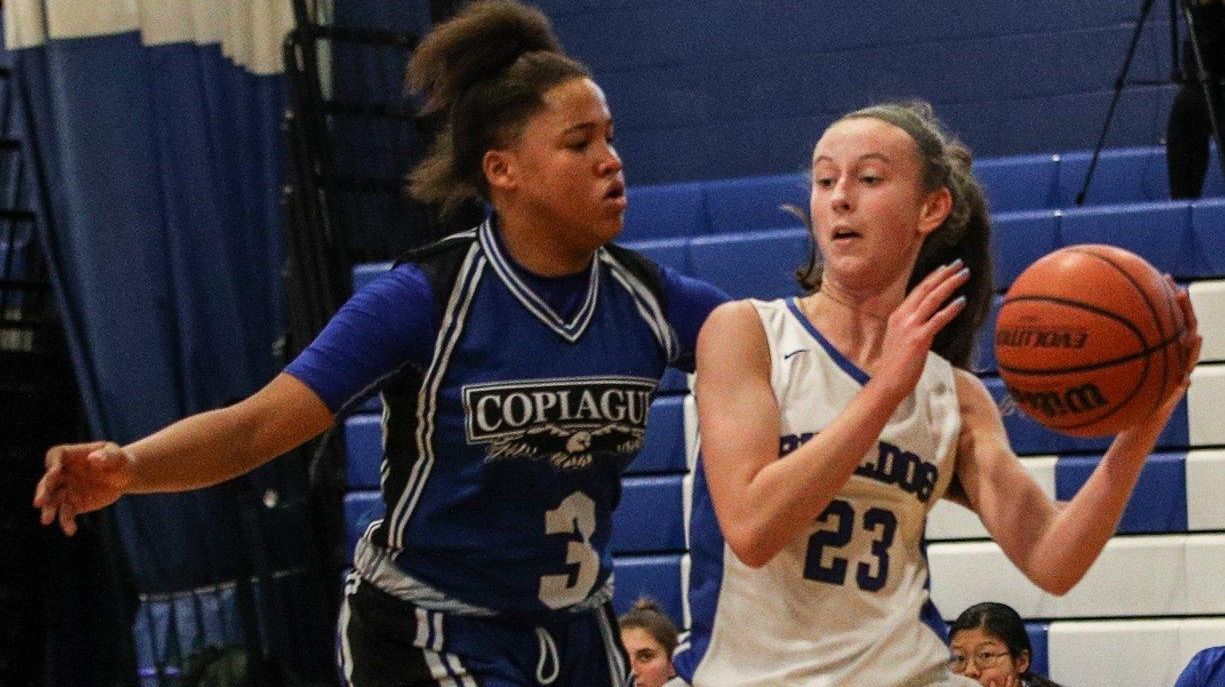 Samantha Muller is never afraid to pull the trigger from beyond the arc.

The freshman has become an integral member of the North Babylon girls basketball team’s rotation, playing key minutes and making the most of her chances. She drained four three-pointers and scored 19 points Thursday night, leading the host Bulldogs to a 65-60 win over Copiague in a pivotal Suffolk III contest.

“My first thing is to pass, but when I don’t have that, I just breathe and let it go,” said Muller, who played as an eighth grader.

Muller scored 10 points in the fourth quarter, including a stretch of six straight with under 1:30 left in the game. As Copiague’s Tayanee Peay torched the Bulldogs (9-2) for 15 of her 27 in the fourth quarter, Muller kept North Babylon from letting Copiague finish its comeback from a 14-point halftime deficit.

North Babylon coach Marc Riley called Peay “one of the underrated kids on Long Island,” and for good reason. The junior wing made her first five shots of the fourth quarter, including two three-pointers.

But Muller, Raiana Brown (19 points, 10 rebounds) and Brianna Lavalle (11 points, seven assists) answered each Copiague possession with a quality look at the basket.

The Eagles (8-2) defeated North Babylon, 57-53, on Jan. 19. Riley and the Bulldogs played with a different energy on their home floor, on which they’re undefeated this season.

Much of their success came from utilizing Brown in the paint. She was met by double-teams nearly every time she touched the ball, allowing her to orchestrate from inside. Her basket with 1:55 remaining gave North Babylon a 58-49 lead.

Now 9-2 in its league, North Babylon is in a race with both Copiague and Half Hollow Hills East. All three teams could have playoff success, exemplifying the deep talent in Suffolk Class AA.

“Hills East is still the team to beat,” Riley said. “We split with them during the year, but all three teams are showing championship character. Everybody’s now gearing up for a playoff run.”

North Babylon’s strength is its offense, which spaces the floor and takes advantage of open shooters. Thursday night, it worked to Muller’s advantage.

Said Riley: “Everybody on the team pretty much has the green light, but sometimes her light is brighter than others.”