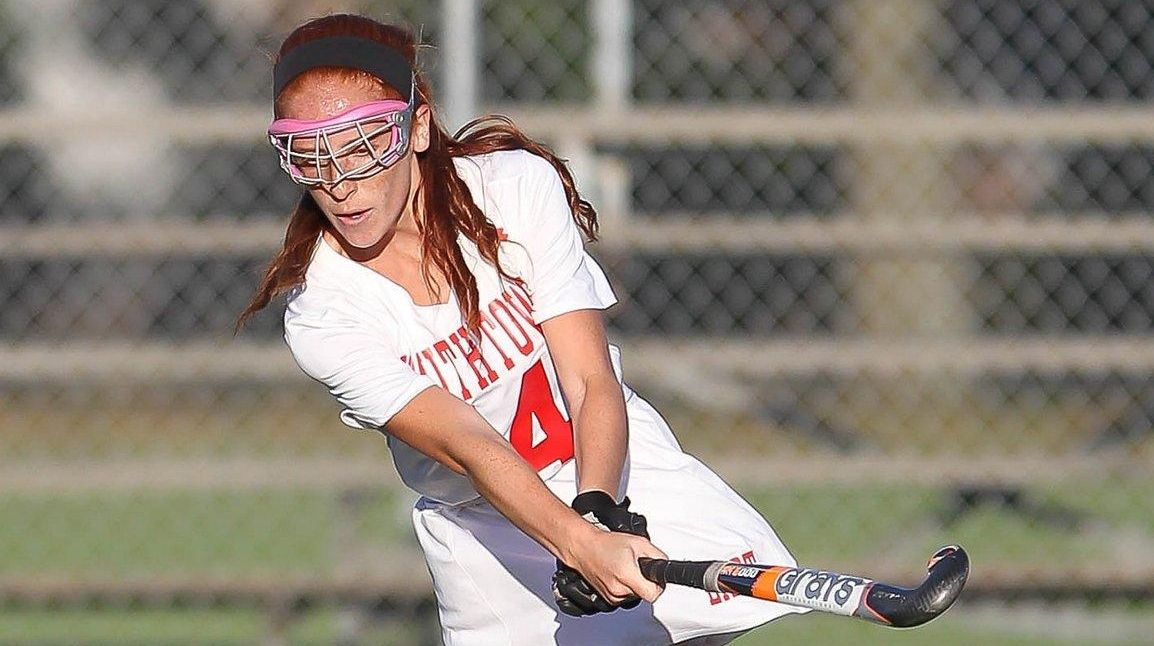 Smithtown East field hockey senior midfielder Amanda Funaro and sophomore midfielder Hannah Ackerman discussed the importance of the team's 3-1 win over Sachem North on senior day. Banners to honor the six seniors hung by the bleachers. Ackerman scored her second goal of the game with 1:45 remaining to give the Bulls a 3-1 lead. After the final whistle, the Bulls ran out on the field to celebrate the win on Thursday, Oct. 12, 2017. Smithtown East coach Ann Naughton talked about what the team is doing to prepare for the playoffs next week. (Credit: Newsday / Melissa Kramer)

The Smithtown East field hockey team sent off their six seniors in the best way possible in the regular season finale — with a win.

With a 3-1 victory over visiting Sachem North on Thursday, the Bulls finished the regular season with an 11-3 record in Suffolk I.

Ackerman, who recorded her second career multi-goal game, said the intensity of the game was really high.

“I think both teams really wanted to win,” she said. “It was very important to both teams. The win means a lot to us because moving forward, we’re really hoping to get far into playoffs and we’re really going to miss our seniors next year, so we’re just trying to get as far as we can.”

Sachem North opened the scoring with a tip-in goal from Victoria Taylor off an assist from Isabella Lorenzo on a drive up the field at 28:12 of the first half.

Less than eight minutes later, Ackerman tied it with her first goal off a corner with an assist from senior Amanda Funaro at 20:45. In the second half, junior Bella Costa scored to give the Bulls a 2-1 lead, then Ackerman notched her second of the game with 1:45 remaining.

“Today was a great game,” coach Ann Naughton said. “I’m very proud. Number one, it was our senior day and our girls definitely stepped up.”

“I think this win was really important going into playoffs,” Funaro, whose assist also eclipsed a career high point total, said. “I feel like we needed this to boost us and show us that we can beat good teams. I think we knew we had it in us, but seeing it out on the scoreboard really meant a lot.”

Sachem North (11-2) will face Eastport-South Manor on Friday to end their schedule. Both Smithtown East and Sachem North have made the playoffs, which begin next week. The Bulls, who have made two semifinal appearances in the last three years, will be waiting to hear who they will face in the first round.

“Going forward, playoffs is a whole new season, and we’re going to prepare for whoever we have to play and enjoy the moment,” Naughton said. “This is what we’ve worked for since August, so we’re very excited.”