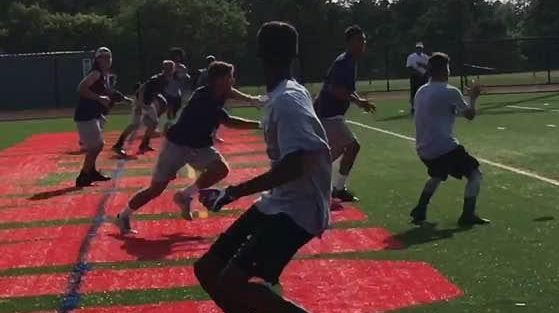 A quick glance at the Brentwood football team’s 1-7 record last year and its No. 12 preseason seeding this year — second to last in Suffolk I — might cause people to dismiss the Indians.

But a deeper look reveals more nuance. Despite Brentwood’s record, five of its seven losses came by one score.

“Last year we didn’t fight to the end,” said senior quarterback/safety Colin Jahkhah. “So this year we have to go all out every game. Have to win and play to our full potential. We just have to come back every game fighting. Can’t stop, can’t give up.”

The Indians hope that mentality will lead them to surprise some teams this season and make a playoff appearance. Last season’s second-to-last preseason ranked team, Sachem North, made the postseason, so it’s been done before.

“We want to start up early,” said senior fullback/middle linebacker Decks Jeanty. “Start up strong and don’t let teams come back and beat us by one or two scores this year.”

Jahkhah is excited to take over the offense at quarterback. He’s led the offense during 7-on-7 drills over the summer and wants to prove himself as a strong two-way player.

“I expect a lot out of him, quarterback-wise,” said first-year head coach Rich DeJesus. “He’s a very smart, intelligent kid with a very good arm.”

Brentwood will rely on a lot of new players this season, along with the experience of Jahkhah, Jeanty, tight end/defensive end Josh Young and fullback/linebacker Devin Cheah.

“There’s a good vibe,” DeJesus said. “We’ve got a lot of new blood out there who are bringing some energy to the field and are going to bring some competition considering we lost a lot of seniors.”

The Indians aren’t planning to flip Suffolk I upside down. They are looking to slowly improve, focusing on opponents on a weekly basis.

With that approach, Brentwood hopes for some surprises. The team won’t forget what happened last season and does plan to improve on the mistakes.

“It all goes back to the fact that we were 1-7,” DeJesus said. “We can’t do the same things we did over and over, so a lot of them, especially the seniors, understand that and are buying into that saying, ‘Look, we’re 1-7. Even though we’re in close games, we’re 1-7. We have to do something different.’”