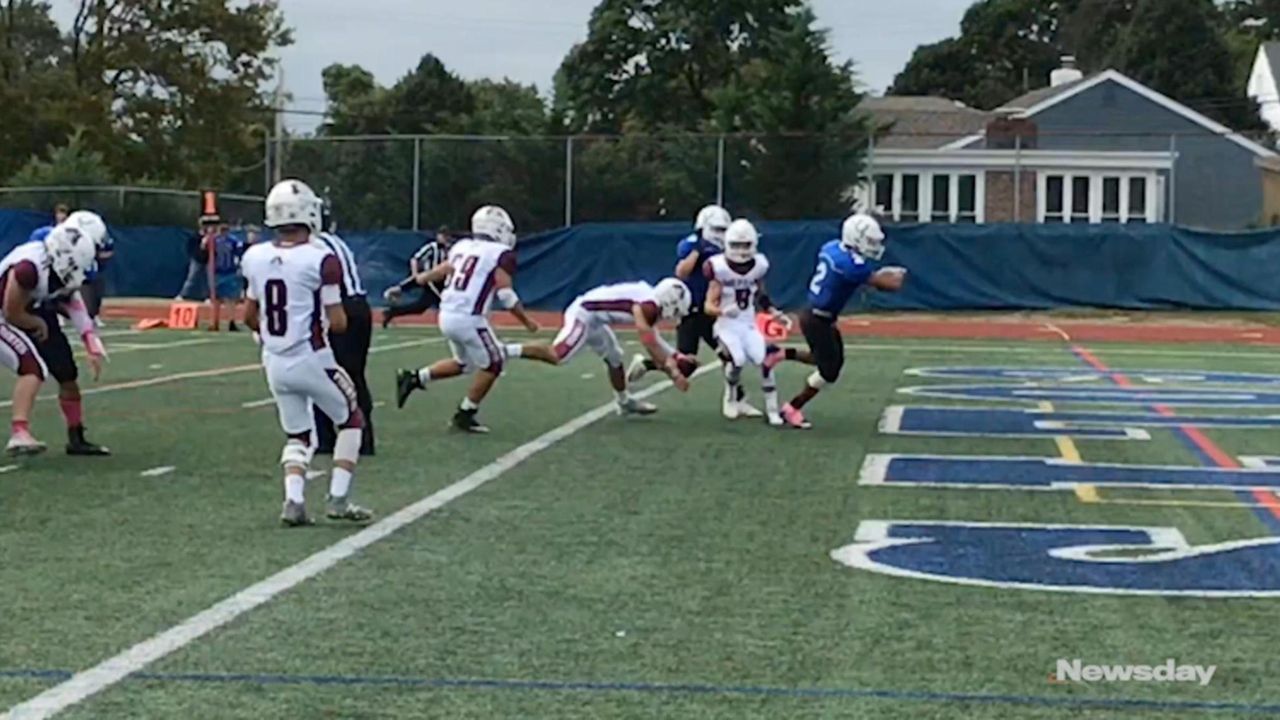 The plan was always to use Matt Hegi out of the quarterback position, but not nearly as much as he was forced to Saturday.

The Mepham team entered its matchup with neighboring Calhoun with some of its top talent sidelined, and in the second quarter, quarterback Sean White was added to that list. The Pirates turned to a two-quarterback system, led by the versatile Hegi taking the majority of snaps.

“I felt comfortable, we have a great offensive line,” said Hegi, who said he played quarterback until freshman year. “I just try to run over guys when I run the ball.”

And that’s exactly what Hegi did for the Pirates late in the fourth quarter, leading an 11-play, 56-yard drive before punching in a 2-yard touchdown run. He then ran in the two-point conversion with 2:26 left in the game, giving Mepham a 14-7 victory over host Calhoun in Nassau II.

In passing situations, Mepham often turned to sophomore Billy Kender, who completed three passes for 44 yards on the final scoring drive, including a 20-yard throw to Anthony Paolillo to bring the Pirates to the 3-yard line.

“We knew we were going to use both guys and it’s a big spot to be in,” coach Anthony Cracco said. “The thought process was just Matt’s kind of been in these games and we knew he’d be poised and Billy, I’m going to use him when we had the opportunities”

And Kender made the most of his opportunities.

“It looks really good,” said Kender about the quarterback pairing. “We drove down the field a bunch of times, drove that one big touchdown at the end of the game, moving the ball well. There’s nothing better.”

Mepham (4-1) opened the game with a 63-yard touchdown run by Gianni Macchio on the first play from scrimmage, but the Colts blocked the extra point. Calhoun (3-2) answered on the ensuring possession with a 9-yard touchdown run by Ariel DeJesus, capping off a 6-play, 65-yard drive to take a 7-6 lead.

The Pirates’ defense took over the game from there, and held Calhoun on the game’s final possession. With the Colts driving to Mepham’s 10-yard line with two seconds remaining in the game, James Murray batted down the final pass as time expired.

“That was one of the best games I’ve ever played in,” said Mepham’s two-way lineman John Aliberti. “Everybody stepped up today.”

Lineman Marco Baez was overcome with emotion, falling to the turf after the final incompletion with a sense of relief.

“Everyone has a ‘why,’” Baez said. … “I played for everyone that couldn’t play in this game, and I played for all the Pirates that wore this [jersey] years ago.”

“In the second half, we buckled down and I think the longer the game went, the more our defense started to pin their ears back and play even harder,” Cracco said. “I couldn’t be more proud of them. It’s just a huge win for them and it shows their tenacity and their ability to overcome.”