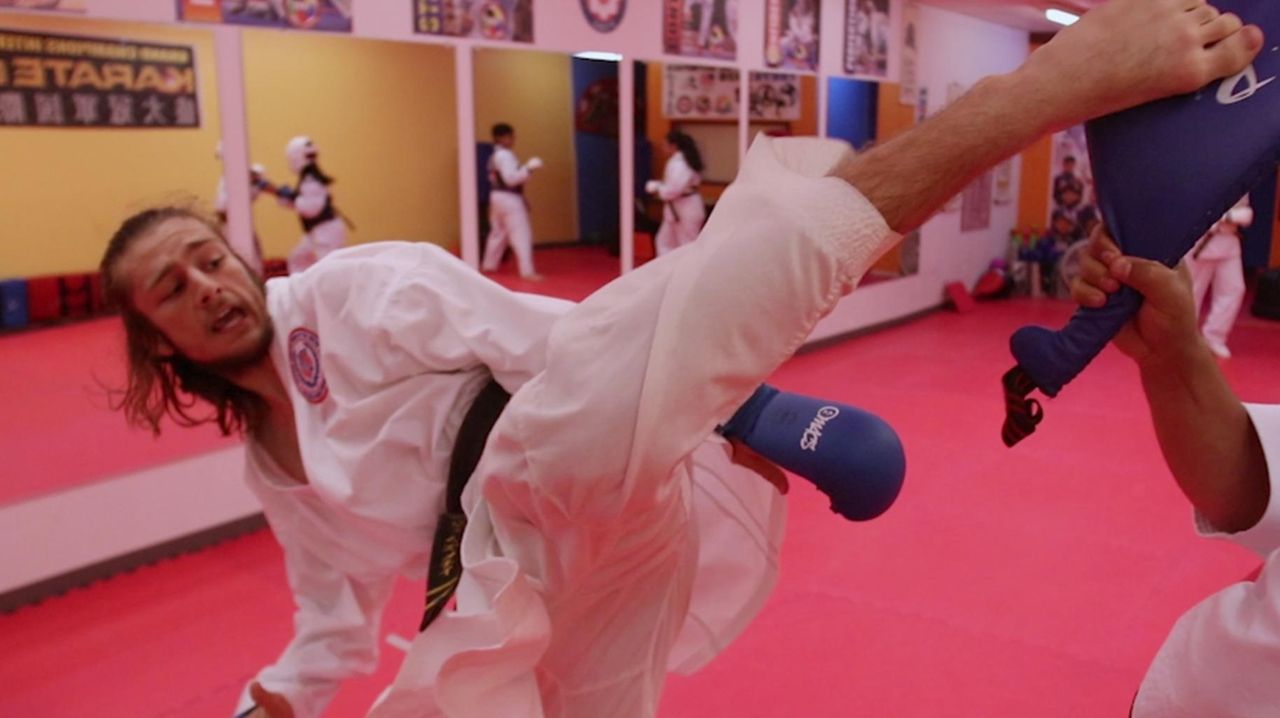 Joe Musumeci, 17, of Central Islip, is a football, karate and bowling star, having achieved success in all three fields. He's won international karate contests, bowled 300 and scored a touchdown in his first football game. He talked about his passions on Tuesday, Oct. 10, 2017.  Credit: Jessica Rotkiewicz, Musumeci Family

Joe Musumeci seems to be good at just about everything — from football to bowling to karate. The only thing he’s not good at is talking about himself.

The 17-year-old senior at Central Islip High School is a captain of the football team, has rolled two 300 games for the varsity bowling team, and he has won two world championships as a black belt in karate. And, oh yeah, he plays drums in the school band and is taking an advanced placement course in politics and government.

But don’t expect him to brag about it, even to his closest friends.

“He doesn’t show it off or anything,” said Michael Hennie, Central Islip’s quarterback and Musumeci’s close friend. “He won’t really even tell you about it. I have to ask specific questions, and that will spark some stories. He’s just really modest.”

He has a lot of reasons not to be.

“Joe is like Leonardo da Vinci,” Central Islip football coach Mike Pyle said of Musumeci, a wide receiver/cornerback, who racked up four touchdowns, 19 tackles and an interception this season. “Everything he seems to do, he just doesn’t do it halfway. It’s done really, really well. He’s a renaissance man.”

“In my 10 years as athletic director here, I’ve never seen someone excel in so many things,” Central Islip’s Lawrence Philips agreed.

Musumeci, a second-degree black belt who hopes to someday represent the United States in karate at the Olympics, credits his success to the discipline and patience he’s learned over 12 years of practicing Shotokan, a Japanese fighting style that originated in the 1930s.

In those 12 years, he has won 14 national titles, two World Union of Karate-Do Federation championship gold medals and one world championship bronze medal, among other things — quite an accomplishment for someone who at 5 years old was terrified after his first lesson.

“He had a tough first day,” said Joe’s father, Jim Musumeci. “He was crying when he came home. He said, ‘Sensei is too loud.’”

Though he hopes to play football in college and said he has had conversations with several coaches, Joe doesn’t want to limit his scope there, either.

“I feel like I’m just an all-around athlete,” he said. “I don’t really consider myself a specific thing. I could play basketball, baseball, if I needed to.”

At school, though, Joe does his best to blend in with everyone else.

“To walk through the halls, you wouldn’t even know it,” Pyle said. “He’s so quiet and unassuming.”

Central Islip High School bowling coach Kevin Spicer, who has witnessed one of Musumeci’s perfect games, said he’s in awe of his achievements.

“You have kids in the high school and they’re good at one sport, maybe two, but Joe’s good at a litany of things,” Spicer said. “I wonder if there are things he’s good at that we don’t even know about.”

Musumeci has his eyes set on competing in the 2020 Olympic Games in Tokyo, though his father thinks he will have a better chance at the 2024 or 2028 Olympics as a 24- or 28-year-old with more experience.

If he continues his success in karate, he could receive sponsorships that would alleviate the cost of travel to tournaments, which his family pays for out of pocket.

It’s his all-or-nothing dedication to everything he does that leaves a lasting impression on those around him.

“All the parents here, they love him because of his respect,” Elrakabawy said. “He shows respect to everybody. He’s like a role model for everybody.”