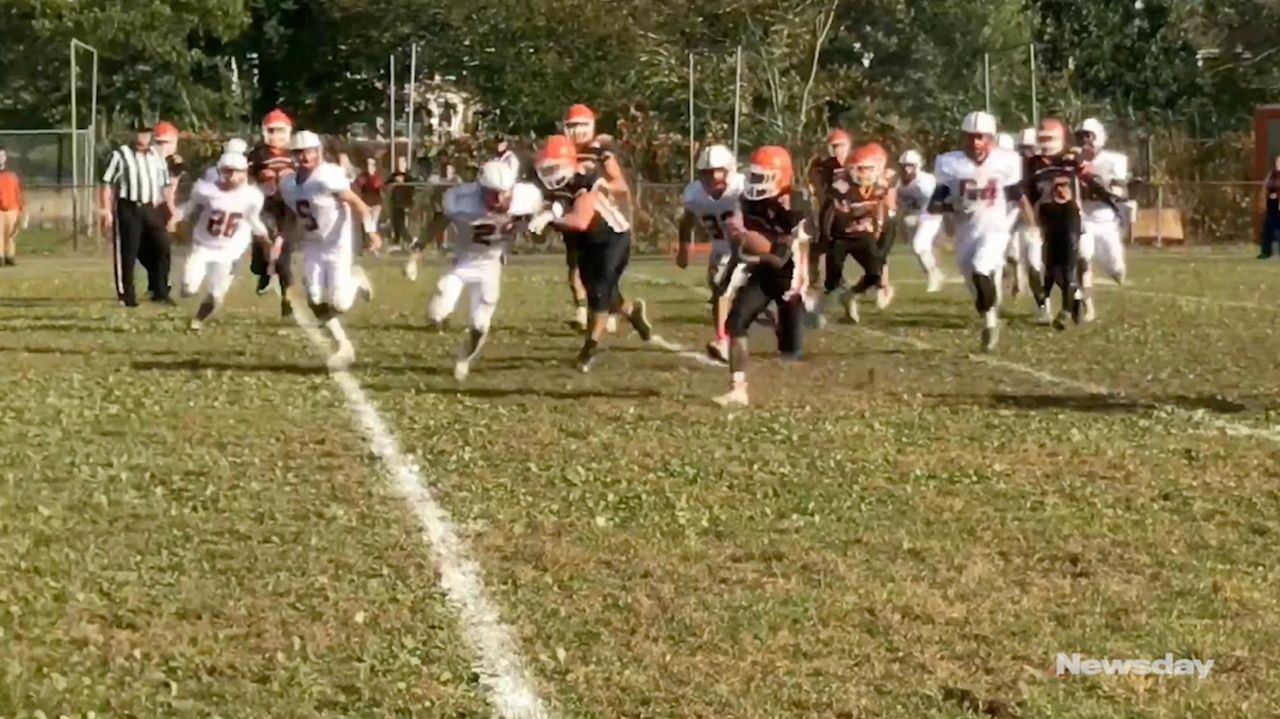 Austin Carman doesn’t believe it happened by coincidence. And neither does his coach.

When East Rockaway was driving and threatening to take the lead late in the fourth quarter, Carman was urging his defensive teammates to remain composed. The Clarke senior had seen situations like this before, and in a moment, the game changed.

With East Rockaway at Clarke’s 17-yard line, Carman capitalized on a mistake. After a fumble on a handoff exchange, Carman pounced on the loose ball and returned it for an 80-yard touchdown with 2:01 remaining, giving Clarke a 10-point lead in the Rams’ 34-30 victory over host East Rockaway in Nassau IV football Saturday afternoon.

“It’s what you prepare for all week, honestly,” Carman said. “You work hard all week and [when] gameday comes around, it’s a test of what you did. And to make a play like that and change it for my team, it means a lot.”

In a game with five lead changes, Clarke held off another late comeback attempt when the Rocks’ Jarell Brown rushed for his third touchdown of the afternoon with 30 seconds remaining. But the ensuing onside kick went out of bounds and the Rams improved to 6-1.

“It was hard going back and forth, but our team stuck with it,” said running back Lucas Abbatiello, who finished with 73 yards and two touchdowns on 15 carries. “We’re very well conditioned, we kept going at them, we never really slowed down and just kept on going, and it helped us in the end.”

After East Rockaway (3-3) took a 24-22 lead following a 7-yard TD run by Brown and his ensuing two-point conversion rush with 4:01 remaining in the third quarter, Clarke executed a 15-play, 53-yard scoring drive spanning more than eight minutes. Quarterback Anthony Caputo capped the drive with a 4-yard touchdown run on fourth-and-goal, taking a 28-24 lead with 7:46 remaining.

“It was great blocking up front,’ said Caputo, who rushed for 64 yards on 11 carries. “I had a clean hole and my offensive line just did a great job. We said we needed to get into the end zone to score and we did.”

The Clarke offensive line, featuring Karl Bouyer, Andrew Iadevaia, Muki Dervisi, Chris Stokum and Mike Heavey, paved the way for the Rams, who ran the ball 39 times in the win.

“It was amazing,” Bouyer said. “I’m going to remember this for years to come, just to be a part of this unit and this game.”

And in the end, it was Carman’s readiness and athleticism on defense that sealed the victory.

“The ball finds him,” Clarke coach Tim O’Malley said. “He’s just a playmaker. He’s a dynamic player and when you get him in space, there’s not a lot of people that are going to catch him.”