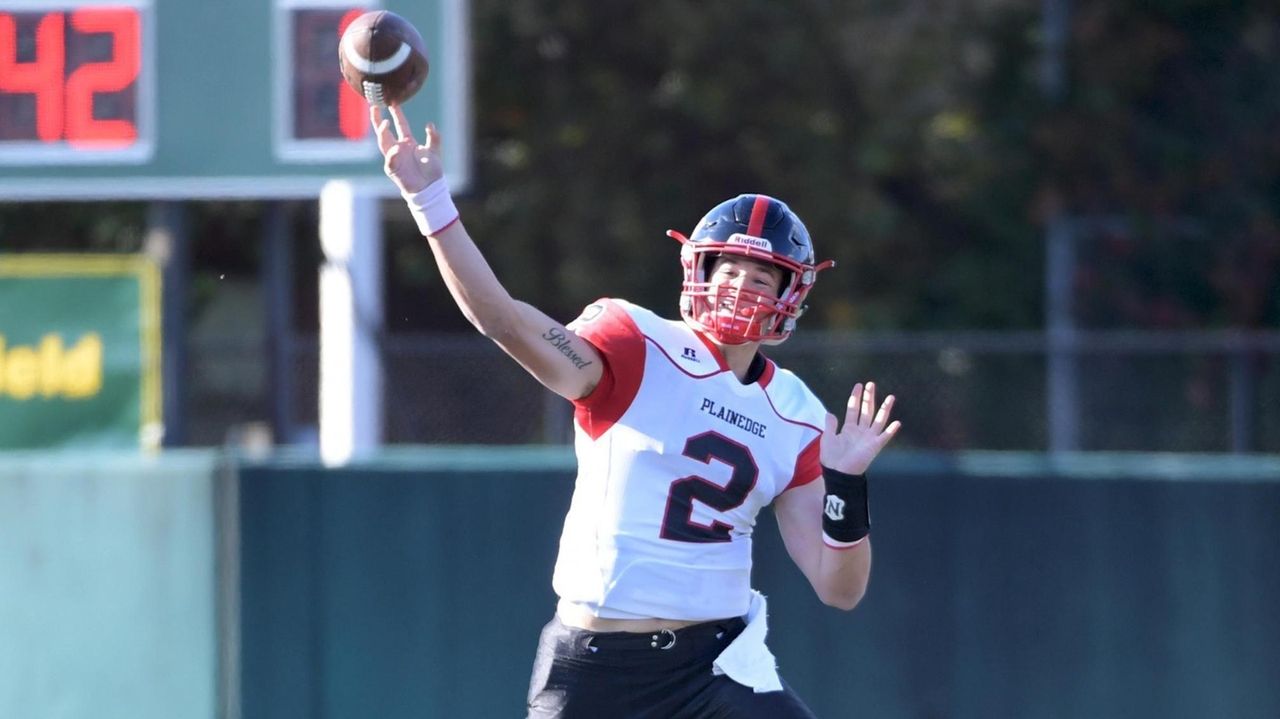 Plainedge quarterback, Dan Villari, the 2019 Thorp and Snyder Awards winner, signed his letter of intent to play at the University of Michigan at his home in Massapequa on Thursday. Credit: Newsday / Shelby Knowles

Plainedge quarterback Dan Villari began the season on a quest to reach his summit. The long and memorable journey was completed on Wednesday.

He reached base camp on his own over the summer with hard work to develop his body and his skills.

Together with lifelong friends as teammates the Red Devils captured the Long Island Class III championship. In the process Villari became a much sought blue-chip recruit. He finally reached his peak on Wednesday when he signed a National Letter of Intent with the University of Michigan.

The celebration of the journey came Thursday at his home in Massapequa where family, friends, teammates and coaches gathered to look back on his journey, pose for photos and share food and laughs.

“This is how it should be . . . and it’s special,” said Tim Villari, Dan’s father. “To see your son working so hard and doing the things he did to reach this dream. . . . It was a dream come true for us.”

“It’s a great accomplishment, what he did,” said Maria Villari, Dan’s mother. “Everyone here saw all that Dan did to get to realize his dream.”

Villari had to send his letter Wednesday, National Signing Day, and called it “the moment my dream came true.”

It was the final moment of a season where he rushed for 1,495 yards and 25 touchdowns and passed for 1,315 yards and 13 touchdowns. The last days of the fall saw him lead the Red Devils past Sayville at the LIC, capture the Thorp Award — given by Newsday to Nassau County’s most outstanding player — and consummate the six-week courtship with the Wolverines.

Joining him at the celebration with his parents were his brother Dylan, and grandparents Rosa and Carmelo Bari along with six teammates: Braden Clark, Chris Gentile, Donovan Pepe, Doug Elsesser, Joe Cavaliere and Vince Dimarco.

“Ever since we were six years old and playing on the Bobcats [a youth team], this is how we drew it up: 12-0,” Dan Villari said. “It’s a surreal feeling. . . . And the Thorp? They deserve it as much as I do. I wouldn’t be where I am without my teammates.”

As last summer started, Villari couldn’t even really see the summit he stands on now. He appeared headed for Fordham and the great education that comes with playing there. But he had always believed, as he said, “I could play at the highest level.”

He got the chance to glimpse the dream last weekend with a visit to Michigan's Ann Arbor campus.

“It’s state of the art facilities and a giant stadium — The Big House — and it seemed like the biggest place in the world,” he said. “Every place they took me was like something you’d never seen. It was that and the education and the national attention. That’s why everyone is attracted to it.”

Villari said that he was stunned when Michigan coach Jim Harbaugh had mentioned him in a conversation with Plainedge coach Rob Shaver and meeting him on a home visit only fueled his desire to be a Wolverine. Now, he said, “I can’t wait to start my four years with him.”

“I just always knew this was going to happen,” Villari said. “I just had to be patient.”