Braden Clark had it right all the way back in August. The Plainedge senior had been one of the many Red Devils doing off-season workouts with star quarterback Dan Villari. He’d seen how the 6-4 senior added 25 pounds of muscle, polished his mechanics and developed his skills at seeing the field.

“Dan is going to put on a show,” said Clark, a centerpiece of the Plainedge defense that faced Villari daily in practices. “Everyone is going to want to see it.”

Oh what a show it was.

Villari grabbed the spotlight early and held it for the entire 12-week season. He piled up 1,495 rushing yards and scored 25 touchdowns and completed 61 percent of his passes for 1,315 yards and 13 touchdowns as Plainedge went 12-0 and captured the Long Island Class III championship. He rushed for 306 yards and four scores and threw for two touchdowns as the Red Devils bested imposing Sayville, 56-20, at the LIC. 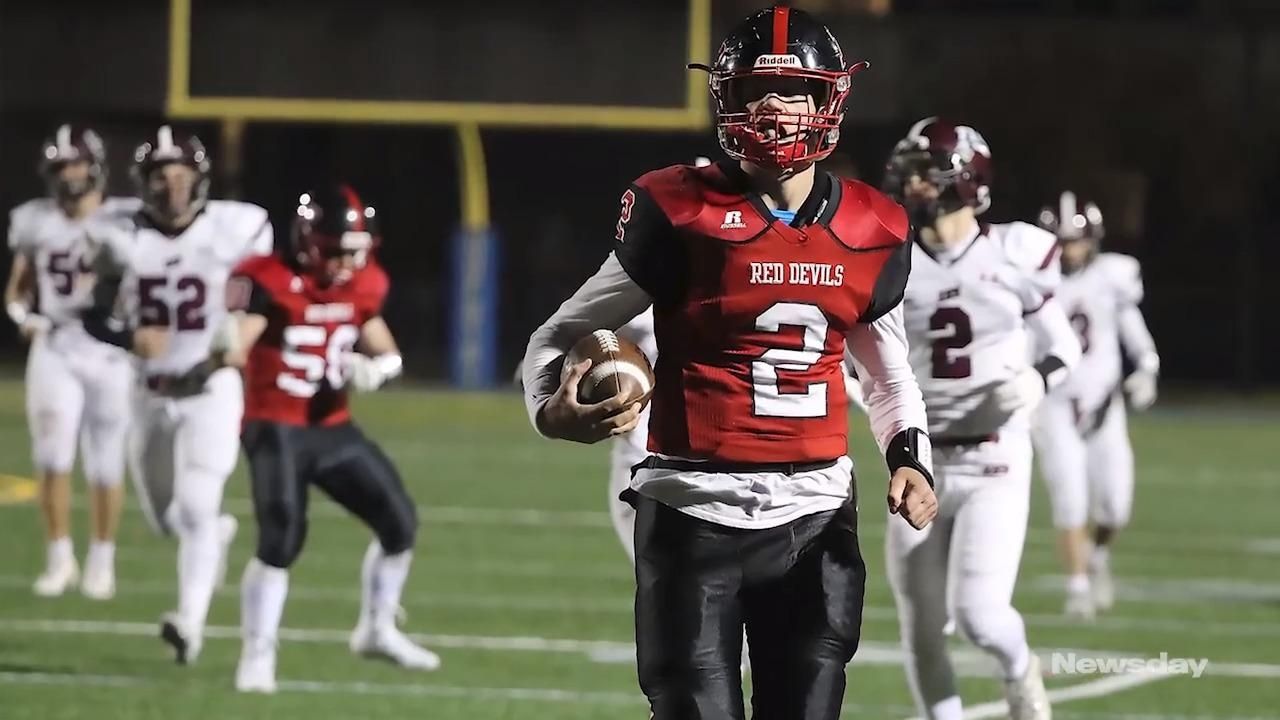 Villari is the second Plainedge player to win the Thorp; Davien Kuinlan was the first in 2015.

Villari exited the 2018 season with plenty of motivation to have a season like this one. He and the Red Devils were trailing Half Hollow Hills West in a close Long Island Class III title tilt when he took a hit that fractured his left arm. It forced the righthanded thrower from the game and Plainedge lost 34-6.

“This time he played with an edge,” Red Devils coach Rob Shaver said. “He didn’t run the ball looking for a first down, he wanted the end zone and he was going to punish any tackler that tried to stop him. Every play he made, every pass he threw, he was trying to score. There was a different kind of confidence and intensity about everything he did.”

Added senior running back Dion Kuinlan: “He came back a bigger, better version of the player he was last season. He carried the disappointment from losing [at] the LIC with him and played every game like there was something to prove.”

In addition to his responsibilities at quarterback, Villari joined the defense to play cornerback in especially challenging situations during the season. None was more challenging than the LIC game against Sayville. Suffolk standout Brock Murtha had pulled in a Long Island record 20 touchdown receptions from junior quarterback Jack Cheshire. Villari was given the assignment to cover Murtha one-on-one.

“We had the choice of double-teaming [Murtha] or trying to cover him one-on-one and [Cheshire] can really pass it,” Shaver said. “So I put our best player on their best player. I told Dan he was just as fast as Murtha and taller. Man, did he do the job.”

Cheshire threw two touchdown passes to set the Long Island record with 43 in a single season, but Murtha caught just one pass in the game, a 30-yarder for a first down in the third quarter with the score 42-14.

“I was ready for it. I knew if we wanted to be champs, we had to shut down Murtha,” Villari said. “[Shaver] said ‘we’re putting our best on theirs.’ He challenged me. ‘Are you ready for this?’ I told him I was.”

As Villari was lighting up Long Island football this season, it drew attention. His top suitor going into the season was Fordham, but the blue bloods of college football started to take notice. Suitors like Michigan, Wisconsin, Rutgers, Kent State and UMass are now part of his recruiting picture.

This coming weekend, Villari will make an official visit to Michigan.

“Dan showed everyone something this season,” senior running back Luke Lombardi said. “He was determined to do something, wanted it so badly and did everything to get it. Watching him this season was like seeing something historic. He became the name on Long Island.”