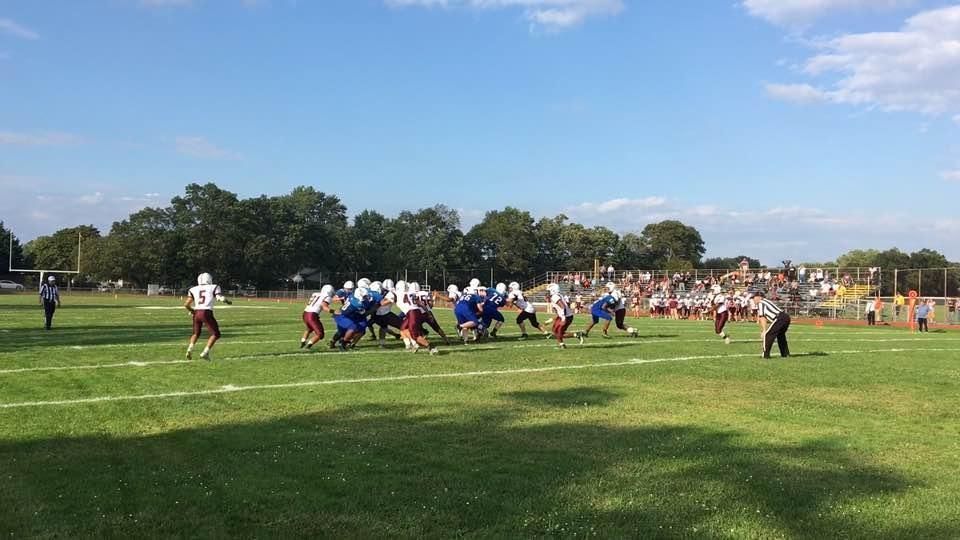 David Estrella, quite literally, carries North Babylon’s football tradition on his back.

The 5-9, 165-pound senior wears the coveted No. 14, in honor of coach Terry Manning’s brother Pat, who the coach said was killed by a drunk driver 25 years ago and wore that number as a Bulldogs captain. “It goes to someone who is a hard worker, a good leader and a tough player,” Manning said. “I’m proud that David, who is my nephew, wears the number for us now.”

Estrella did the number and its lineage proud, carrying 30 times for 161 yards and two touchdowns as host North Babylon scored all of its points in the second half to defeat Bay Shore, 22-0, on Thursday in Suffolk II.

“We made a few adjustments and trusted the process,” said Estrella of what was different after a scoreless first half in which Estrella had only eight carries for 16 yards. “But I couldn’t do anything without my offensive line. We wore them down and broke them down. It’s five yards a pop and chew up the clock. That’s our offense and we have a great history.”

It’s a history embodied by the slogan on the T-shirt Manning wore: “GROUND AND POUND.” The Bulldogs have, for the most part, abandoned the wishbone for flex-bone and power-I alignments, but they haven’t abandoned their old-school philosophy of run, run, run and run some more. They attempted only one pass and it was intercepted in the first quarter. So much for a balanced attack. Even when the ground game is unproductive, the Bulldogs keep pounding away.

In improving to 2-0 while dropping the Marauders to 0-2, they dominated the second half with Estrella getting much of his yardage running right on toss plays out of the flex-bone. “We didn’t change much at halftime,” Manning said with a grin that said change isn’t really in his vocabulary. “We missed some blocks in the first half. It’s a new line and they’re learning.”

The lesson of the second half was simple: Give the ball to Estrella. On the Bulldogs’ first scoring drive, he carried nine out of 10 plays, including runs of 14 and 19 yards, and capped it off with a 4-yard burst. As if to prove he wasn’t fatigued, Estrella also shook off a tackler to score the 2-point conversion for an 8-0 lead with 40 seconds left in the third quarter.

Two plays into the fourth, Estrella recovered a fumble that set up his 3-yard touchdown run. Estrella finished off Bay Shore on North Babylon’s next possession, carrying six straight times in 10-play drive capped by Anthony Sobotker’s 2-yard run. Sobotker also made four tackles and had a sack.

“David is a beast. I’m not worried about how many times he carries the ball,” Manning said. “He’s in great shape. We’ll keep feeding him the rock.”

He wears it well.