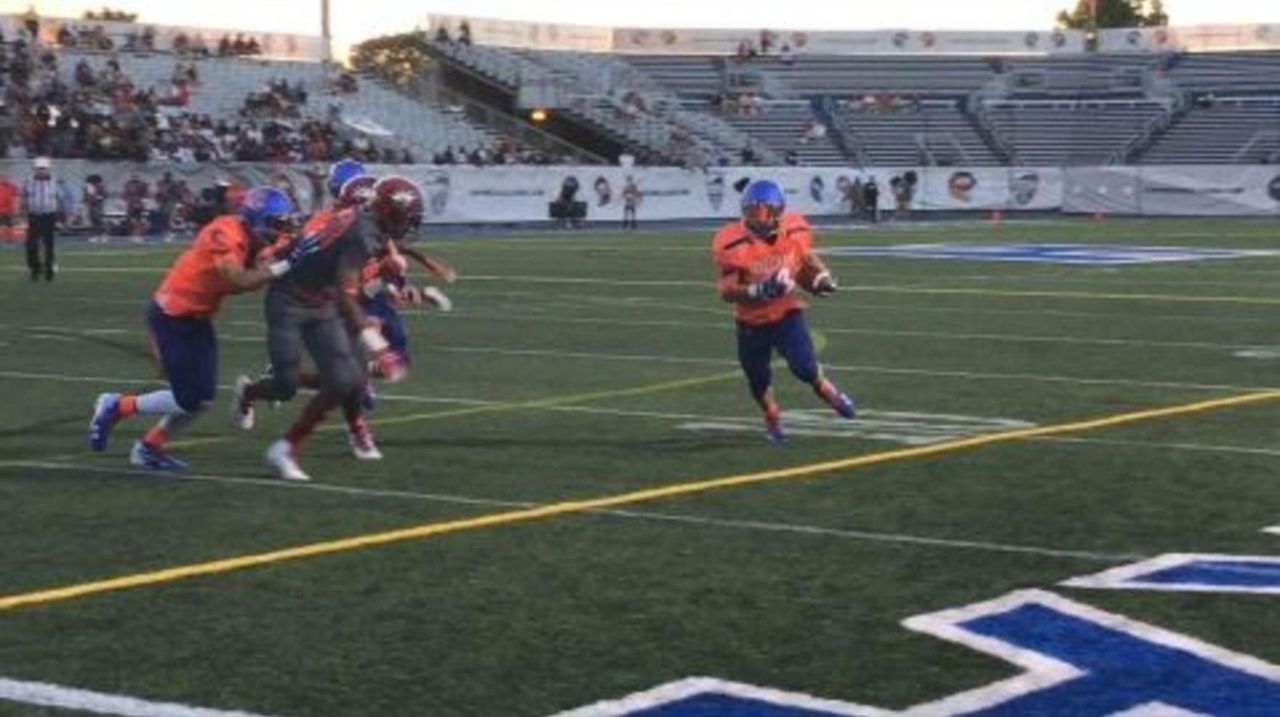 Last July, after a couple of days contemplating a football scholarship offer from the University of New Hampshire, Dylan Laube made up his mind. “I want to be a Wildcat,” he recalled telling his parents.

Long Island gave Laube some help late with a bit of trickery. On fourth-and-14, Oceanside quarterback Tommy Heuer handed off to teammate Derek Cruz on a jet sweep, took the toss-back and lofted what proved to be a game-winning 34-yard touchdown pass to Massapequa’s Owen Glascoe with 41 seconds left.

New York City hit a magical pass of its own, a 30-yard TD strike from Mike Nicosia to Titus Leo on the last play of regulation, and opted to go for the win. But Sayville’s James Lyons broke up the two-point conversion pass in the end zone to preserve the victory, ending a two-year City winning streak. Long Island leads the series, 13-8.

It was a wild ending to a Wildcat-themed evening.

“We set it up on Wednesday, in case there were some goal-line situations,” said Laube, the 2017 co-Hansen Award winner for Long Island Class III champion Westhampton.

There were. Three times the New Hampshire Wildcat lined up in the Long Island Wildcat, took a direct snap and provided a red-zone lift. The 6-foot, 195-pound back scored on 5- and- 1-yard bursts in the second quarter and put Long Island ahead 21-14 with another 1-yarder in the third quarter.

Laube did more than run out of the Wildcat. He carried 13 times for 76 yards, returned three kickoffs for 50 yards and caught two passes for 25 yards. His final reception was huge, a 21-yard hookup with Lindenhurst’s Nick Anzalone that kept the winning drive alive.

“It’s awesome. I’m everywhere on the field,” he said with a huge smile. “This is a taste of what it will be like in college.”

It was Laube’s hunger for football and a stubborn streak that allowed him to fulfill a childhood dream of earning a college football scholarship. He received numerous lacrosse offers as a freshman and sophomore — he was a four-year starter and All-County player — but demurred each time, holding out for football offers. It took until summer football camps after his junior year for colleges to bite. The first nibble came from Brown; New Hampshire later served up a scholarship. “I always said I wanted to play football in college,” Laube said. “I’m a positive kid. You can never have a doubt.”

Laube was the focal point of a run-first wing-T at Westhampton and had to adapt to the pass-first spread. “For him to come here from a system where he had 40 touches a game and fit in was impressive,” offensive coordinator Rob Blount of Oceanside said. “He doesn’t mind blocking; we put in a little Wildcat for him. The plan was to get him the ball in space as often as we could.”

Which allowed Laube to run wild.