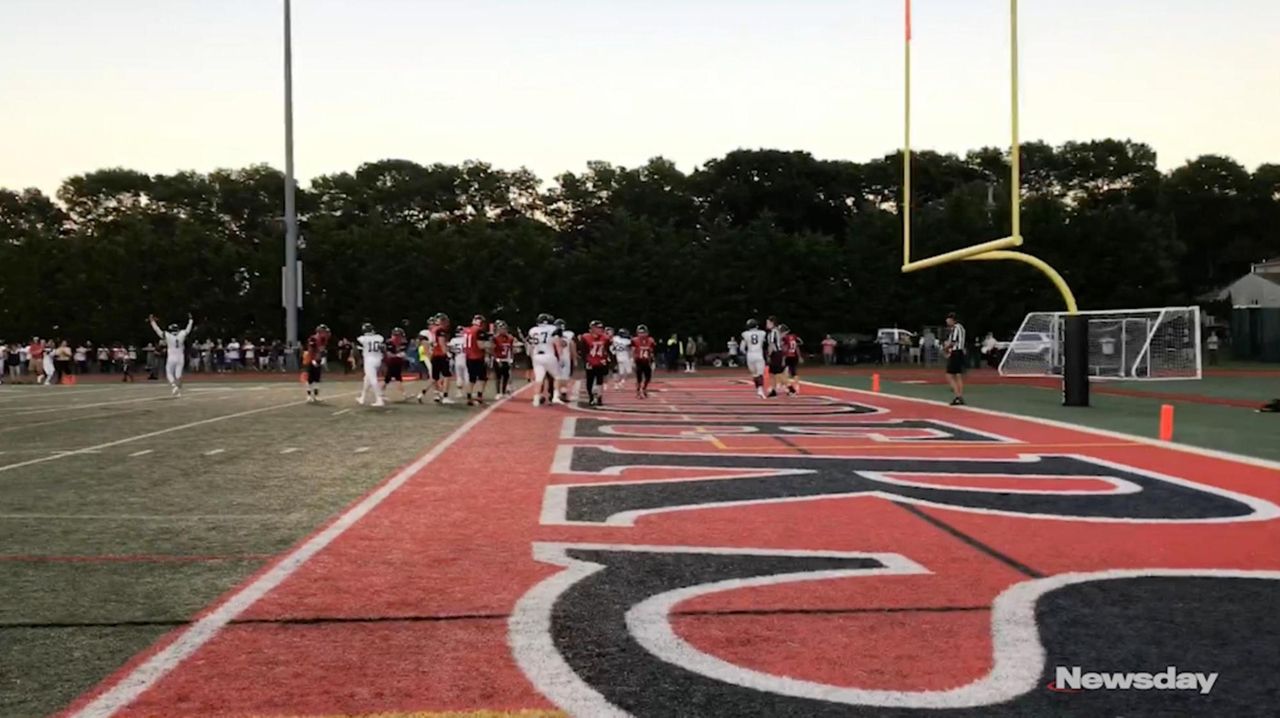 Floyd's Nick Silva, the Great American Rivalry Series Most Valuable Player, discusses his team's 41-12 victory over Patchogue-Medford on Friday, Sept. 14 at Patchogue-Medford High School. Silva talks about the atmosphere during the Great American Rivalry Series game and the team receives a post-game pep talk. In this video, two of four of Silva's touchdowns are shown.  Credit: Newsday / Melissa Kramer

Nick Silva kept his legs moving all night, but his biggest moment occurred when he finally stopped.

The Floyd senior running back sparked a dominant offensive showing by the Colonials on Friday night, lifting his team to a 41-12 victory over Patchogue-Medford in Suffolk I. The matchup was part of the Great American Rivalry Series, sponsored by local Marines, and Silva’s four touchdown performance earned him MVP honors. He appreciated the accolade as much as the win.

“It was a good game,” said Silva, who finished with 91 yards rushing on 12 carries. “We had to make a couple plays and we made them. Then we got up a little bit and kept playing as a team.”

The Great American Rivalry Series, currently in its 15th year, travels the country highlighting some of the best high school football  contests. Long Island has hosted a handful of games in the last few years, and this season’s Patchogue-Medford and Floyd game perfectly fit the criteria the event’s organizers and sponsors look for.

“They picked it specifically because of the local Marines here and they knew it was a good game,” Michael Leonard, the senior event director for the series said. “It’s a big rivalry here, a lot of tension throughout the game.”

The teams exchanged possessions early in the first quarter, but Floyd (2-0) got on the board in the waning minutes of the  period as Mack Driver scrambled 1 yard into the end zone.

Silva took it from there.

He scored on runs of 5 and 2 yards to give Floyd a 20-0 lead with 5:22 left in the second quarter, dodging tacklers and refusing to go down on first touch.

“He always comes up big,” Floyd coach Paul Longo said. “We started off a little shaky, but then they came on.”

Silva regularly sees action on both sides of the ball and he made sure to draw a spotlight on defense as well. Only 25 seconds after running in his second touchdown of the night, Silva forced a Patchogue-Medford fumble, recovered the ball and dashed 30 yards into the end zone for another score, making it a 27-0 game, and effectively taking the wind out of the Raiders’ sails.

“I saw one of our outside linebackers make a great play, and I [knocked] the ball loose,” Silva said. “So I just went in and took it. It bounced and I got it.”

Patchogue-Medford (1-1) did its best to respond, getting on the board with 9:44 left in the third quarter, as Luke Thompson found Latrell Gilmore for a 9-yard touchdown. Silva, once again, was quick to respond. He notched his fourth touchdown on the next Floyd drive, this time from 26 yards.

It wasn’t a perfect game for Floyd, the Colonials forced another Patchogue-Medford fumble late in the third quarter, but returned the ball to the wrong end zone. Still, Floyd will take the win, looking to build off a rivalry game this early in the season.

“It’s the old, take it one game at a time,” Longo said. “We’ve got to come out each week ready to play.”