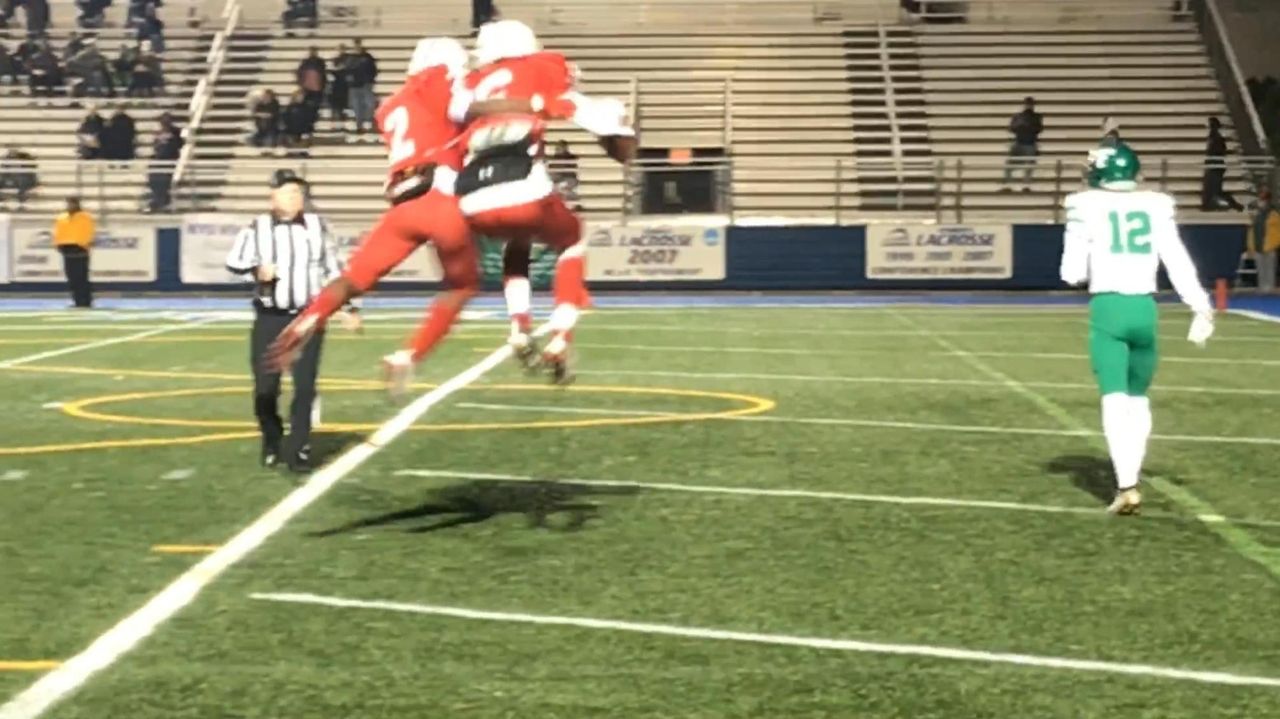 Freeport has left so many slack-jawed with its electrifying and high-scoring offense this season. However, in Thursday night’s Nassau Conference I title game against Farmingdale, the Red Devils showed that defense wins championships.

Makhai Jinks had a huge offensive night with 169 yards and three touchdowns on 18 carries, and the Red Devils’ defense never let the Dalers get anything going in Freeport’s 30-7 victory at Hofstra’s Shuart Stadium.

It was the 10th county title for Freeport (11-0), the Conference I champion for the third time in four years.

The Red Devils will face the winner of Friday’s Floyd-Longwood game in the Long Island Class I championship game at 4:30 p.m. next Friday at Stony Brook University’s LaValle Stadium. Freeport is 6-2 in the LIC.

The Red Devils allowed one big play, a 47-yard touchdown pass from running back Kevin Wilson to quarterback Nick Lundin in the second quarter, but Farmingdale (9-2) managed only 55 yards on its other 40 offensive plays.

Jinks had touchdown runs of 15, 14 and 10 yards for Freeport, which led from the third snap of the game through the conclusion. But its offense had to work hard against a Farmingdale defense led by Neil Levantini, who had three tackles for a loss.

Freeport’s Terrance Edmond was 7-for-10 passing for 127 yards and threw a 43-yard touchdown pass to Dakairi Stevenson (five catches, 100 yards).

Jinks was front-and-center from the start. On the second play of the game, the senior running back ran 50 yards to the Farmingdale 15. One play later, he was in the end zone on a 15-yard scoring run.

Farmingdale kept the Red Devils out of the end zone on their next possession, stopping them on three goal-to-go plays before Chayse Gordon converted a 28-yard field-goal attempt.

Freeport’s third possession was another three-play touchdown drive. It culminated with Edmond finding Stevenson running a slant pattern from the right sideline, a 43-yard connection for a TD and a 16-0 lead.

Wilson was a clear focus of the Freeport defense, even if he wasn’t at full strength.

Wilson scored six touchdowns in the Dalers’ 49-7 win over Oceanside last week but tweaked his hamstring late in that game and did not practice this week. He couldn’t get anything going in the first half, carrying eight times for just four yards.

Wilson did find a way to get Farmingdale on the board, though. He took a direct snap and found Lundin behind the defense in the middle of the field. Lundin nearly was brought down from behind but broke away for a 47-yard touchdown that cut Freeport’s lead to 16-7.

Freeport and Jinks were back at work on the next possession. He had four rushes for 33 yards in an 80-yard drive that he capped with a 14-yard touchdown run, making it 23-7 at halftime.