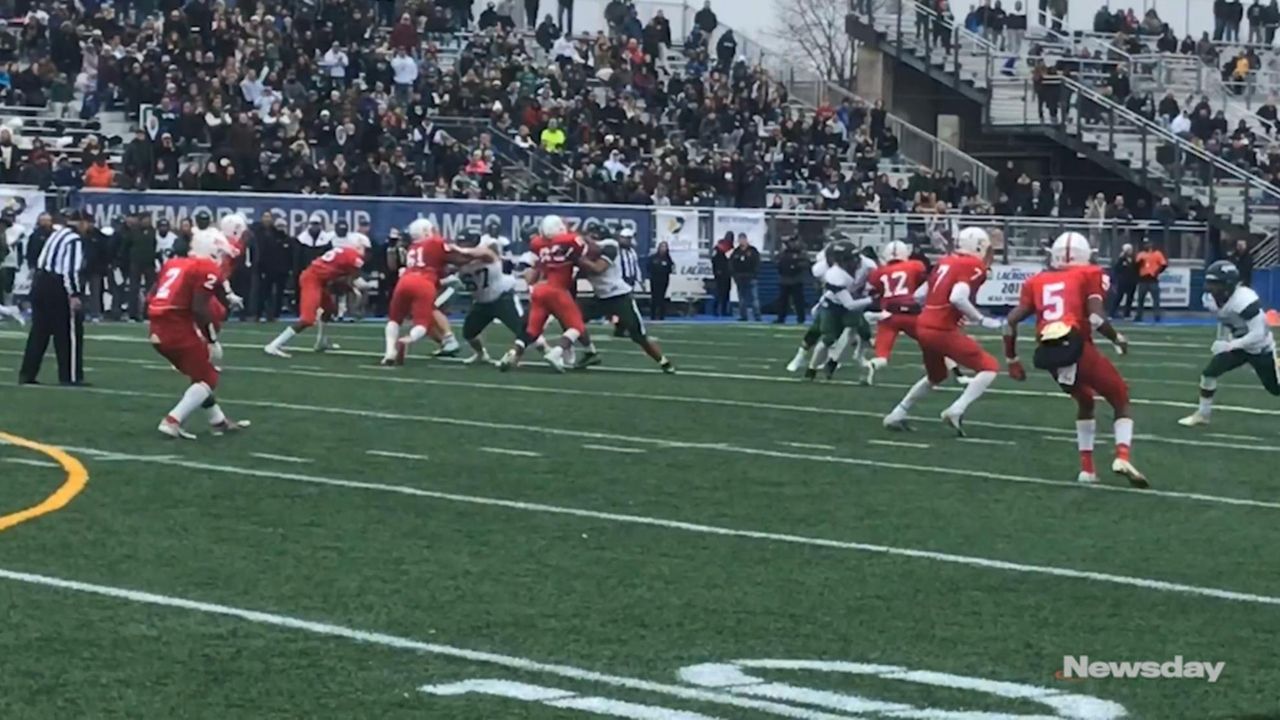 The most anticipated game of the Long Island high school football season actually lived up to the hype.

Unbeatens Freeport and Floyd staged the contest of the season, a fierce battle in the Long Island Class I championship game Saturday at Hofstra’s Shuart Stadium. In the end, it was Freeport — with Jordan Jackson front-and-center — that made just enough big plays to eke out a 20-19 win.

A video of Justin Lescouflair’s run, showing great vision and strength to regain to lead for Freeport in the third quarter pic.twitter.com/MmUHevIlCd

The Red Devils (12-0) snapped a 13-13 tie late in the third quarter when Justin Lescouflair broke a pair of tackles and burst through a sliver of daylight for a 58-yard touchdown that, with Giovanni Martini’s extra point, made it 20-13.

Floyd (11-1) moved within 20-19 on a 31-yard touchdown pass from Mack Driver to Jordan Clinton with 8:18 left, but Jackson came off the edge to block the extra point.

Floyd got the ball back with 3:11 left, but Driver was picked off twice. Terrance Edmond got the first one on a third-and-19 pass, giving Freeport the ball with 2:03 left, and Driver’s last-ditch heave was picked off by Jackson at the Freeport 28. He ran with it until the clock expired and then slid to end the game.

“I expected them to throw deep — they had to because it was the last play of the game — and once I saw it, I attacked it. That’s my first pick of the season,” Jackson said. “I was looking at the clock. I was going to run until there were zero seconds left and then I slid. That was the best feeling I’ve ever had.”

It was the second Class I title in three years and sixth overall for the Red Devils, who went 12-0 for the first time.

“I can’t remember a game like this — it was a real heavyweight battle,” Freeport coach Russ Cellan said. “Either team had a shot. Neither team quit. It was two great programs going at it and giving it everything. I don’t think either team experienced during this season what they experienced today.”

“It was the fight everybody wanted to see,” Edmond said. “It happened today and we were victorious.”

Edmond threw for 153 yards and two touchdowns — 13 yards to Jackson and 22 yards to Jayvian Allen — and rushed for 68 yards. Gerard Smikle was the biggest force in holding Floyd to 83 rushing yards. He had 13 tackles, three for loss, and Makhai Jinks had an interception.

Driver threw for 234 yards and two touchdowns, including a 55-yarder to Matthew Wagner. Clinton also threw an option pass to Eddie Longo for a 9-yard TD that tied the score at 6 in the second quarter.

Freeport wasn’t really challenged during its first 11 games and there were questions about how the Red Devils might handle a taut game and some adversity. They answered, as Cellan said, “very positively.”

“You never know until you are there. I’m really proud of my guys — they battled through,” he said. “It was a tight game at halftime. There was no finger-pointing. There was a little bit of unraveling because it’s an unfamiliar situation. But we got it together at halftime. We said, ‘There’s a guy on either side of you that is counting on you and it’s time to come through for those other guys.’ They answered the bell.”

The last tie of the game was 13-13 after the Driver-to-Wagner TD connection with 2:06 left in the third quarter. Jackson was beaten on that play but said, “I had to get myself focused again for the rest of the game.” He clearly accomplished that, making the two big fourth-quarter plays.

On the run in which Lescouflair put the Red Devils up to stay, he broke a pair of tackles and made a pair of cuts in the middle of the field before breaking away.

“A guy dove his head at me. Another guy tried to wrap me up from behind,” he said. “I don’t know how I broke them, but I kept my legs churning until I saw a little daylight and then it was ‘run as fast as you can.’ ”

When Jackson made his slide as the clock expired, his teammates mobbed him.

“They made a plan early in the season and they stuck to the plan and never wavered,” Cellan said. “We’ve had some very good teams, but we haven’t had a lot that were, top-to-bottom, this focused. That was the X-factor.”

Added Lescouflair: “To go out undefeated and make Freeport history is such a rewarding feeling. We put in the work together. We executed the plan together. We hung together through the toughest game of the season. We got better every week and built ourselves to this. No one can take that away.”

Freeport’s Long Island Championships, all in Class I:

LI's past football championsA database of every county, LI and CHSFL champion dating to 1946. LI Class I championship: Freeport vs. FloydFreeport defeated Floyd 20-19 in the Long Island Class I championship on Saturday, Nov. 24, ... Nick Silva 'heart and soul' of Floyd footballFloyd halfback Nick Silva leaned over and helped quarterback Mack Driver to his feet. The ...