Freeport celebrates its victory against Floyd in the Long Island Class I championship at Stony Brook University on Nov. 29, 2019. Credit: George A. Faella

The problem with describing the arc of Freeport’s run to the 2019 Long Island Class I championship is that there was no arc. The Red Devils were the team to beat when the season started and no one managed to beat them. For a second straight year, they were a perfect 12-0 and this time never really got a scare.

“They went wire-to-wire and that’s really a tribute to the kids,” Freeport coach Russ Cellan said. “Sometimes kids struggle to maintain it, especially coming off a season like we had the year before. But our guys had a plan and they followed it all the way to the end.”

This is not to say there weren’t moments where the Red Devils need to tap into their wealth of character. Arnold Cruz, a key senior, missed time after suffering a broken hand in the second week of the season. Farmingdale was within 14-6 in the third quarter in Week 6. And in the championship game – a 42-14 win over Floyd at Stony Brook’s LaValle Stadium – quarterback Terrance Edmond suffered a mobility-robbing ankle sprain and they trailed 14-13 at the half.

“I don’t think we ever had our backs to the wall, but there was some adversity,” Cellan said. “Every team has a different personality. This one was very confident in any situation. Most [players] were part of the [2018] championship team. Some had played as sophomores the year before that. They had big-game experience that they could tap into. They’d already seen a lot so they always found ways to figure it out.” 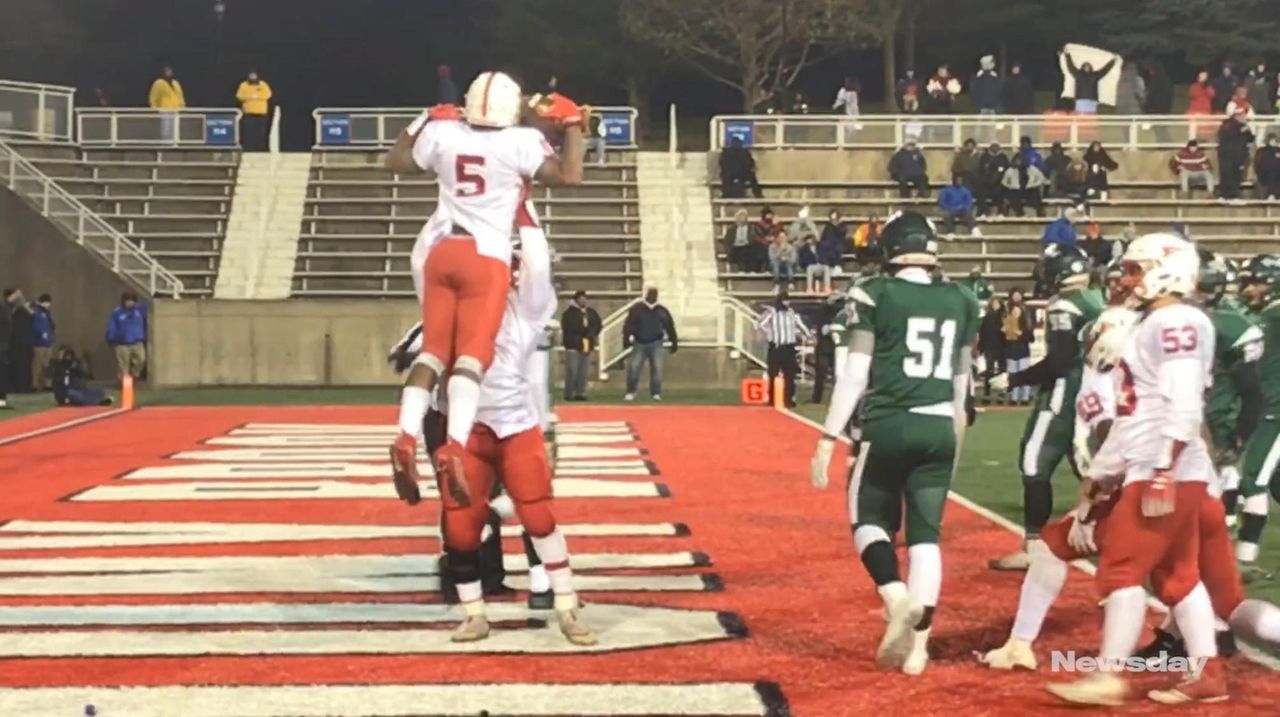 “I’m incredibly proud of what we’ve done together – back-to-back championships, 12-0,” Edmond said. “This is what can happen when a group of players focuses on accomplishing a goal and never takes our eyes off of it.”

Edmond, who this season rushed for 10 touchdowns and threw for 10 more, was badly hobbled against Floyd. He couldn’t run the ball and couldn’t even throw a block, but Cellan valued his leadership so much that he never considered removing him.

“The quarterback on any team has a lot more on him than, say, an offensive tackle and we needed his skill at managing the offense,” Cellan said. “When you have a successful team and they see all the same people in the same places, you have no reason to think you won’t be getting the same result.”

There were several good stories behind Freeport’s sustained success in 2019.

Running back Makhai Jinks, who was asked the previous two seasons to play offensive tackle instead of manning the backfield, finally got his chance to run and scored 20 touchdowns, including five in the LIC.

Defensive end Dan Murphy was a bit player in 2018 and a reserve at the start of this season but, through his dedication to improving himself, forced Cellan to make him a starter and move Tristan Sabb to linebacker. He ended up as Freeport’s leader in tackles (60), sacks (4) and tackles for a loss (15). And Sabb, too, thrived with the move to finish with 54 tackles and 13 tackles for a loss. “We just saw we had to get Murphy on the field,” Cellan said.

Myles Norris had a standout season anchoring both lines and Cellan said he “had one of the most dominating seasons I’ve seen since D’Brickashaw Ferguson.”

And there was the emergence of do-everything junior Jayvian Allen, who scored 18 touchdowns on rushes, receptions and returns; he’s a candidate to replace Edmond next season as the Devils’ offensive linchpin.

Indeed, this Freeport squad was one without weakness. The Red Devils outscored opponents 499-100 and averaged a 30-point margin of victory in its four playoff wins.

“We showed a lot this season – we could beat teams with our offense and we could beat them with our defense,” Norris said. “We were the same team in every game, very consistent.”

That could be because Cellan asked them to treat every contest this season as a title game.

“They got it,” Cellan said. “The most important game of the season is the one you’re in right now. If you don’t take care of things today, tomorrow may not matter.”

Freeport took care of everyone.

RED DEVILS' ROAD TO THE CHAMPIONSHIP