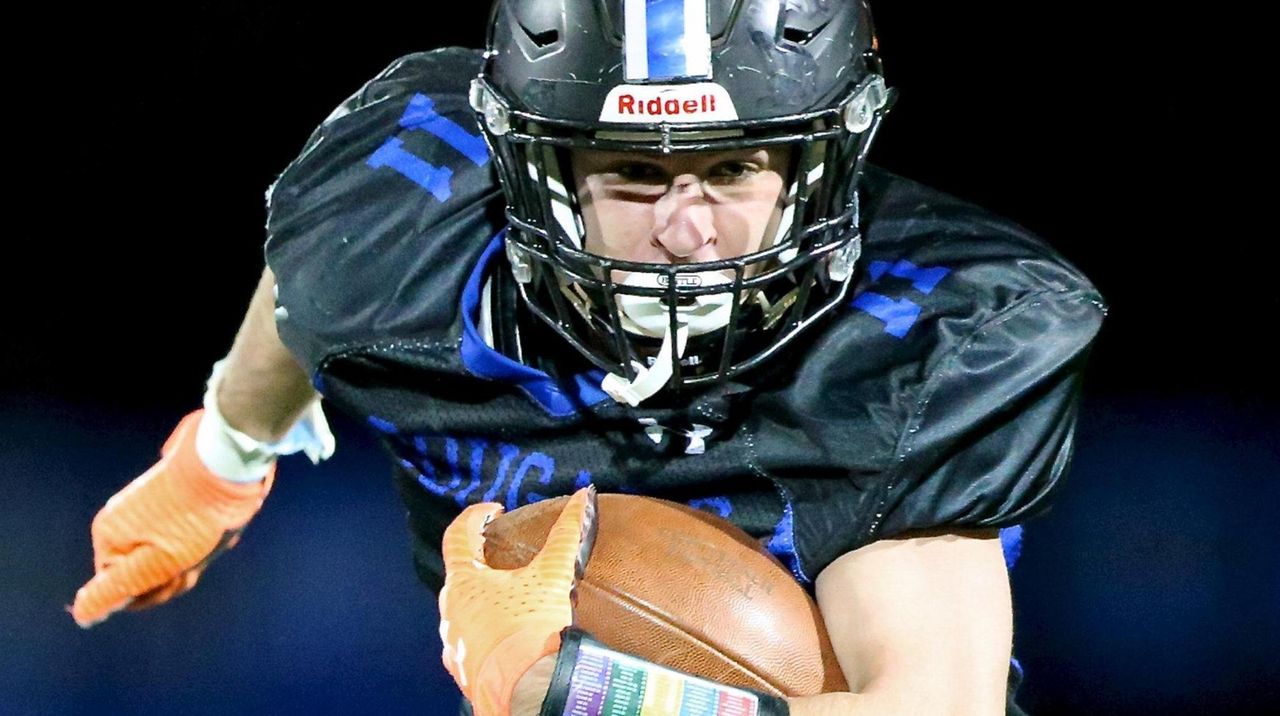 David Adegoke wouldn’t take credit for the play. He sheepishly declined to take all the praise for a blocked punt that helped Centereach open a 20-point halftime lead.

The crucial block was one of five turnovers forced by Centereach. and was set up after Chris Crane’s sack of quarterback Brett Martin pinned the Thunderbirds inside their 5.

“We got into the backfield and got a huge push on the up backs,” Adegoke said. “And we forced them back into the punter causing the block. And there was Liam for the recovery.”

The win moves Centereach (5-3) into position to play its quarterfinal playoff game at home next week. Hills East fell to 5-3 and will play on the road.

The Cougars opened the scoring in the first quarter with a seven-play, 70-yard drive on their first possession. After six straight running plays behind Eric Harrington moved the ball to the Thunderbirds 39, the Cougars went to the air.  Sophomore quarterback Justin Robbert found brother Matt Robbert cutting across the middle for a quick slant. The senior made the catch and shed two tackles on his way to a 39-yard touchdown. Matt Robbert added the extra point to make it 7-0 with 4:25 left in the first quarter.

“It was a a third down-and-8 play and I was just trying to break that first tackle and move the sticks,” he said. “I was looking for the first down and to keep the chains moving.”

The Cougars capitalized on a turnover to extend the lead. Hills East drove to the Cougars' 9 but on a third-and-2 run, the ball was stripped and recovered by Adegoke at the 3. He hesitated for a moment and raised the ball over his head thinking the play had been stopped.

“A Hills player swiped at the ball and I realized I better run,” Adegoke laughed. “I thought my knee touched on the recovery and I was down. But I guess not.”

“They’re a real fast and physical team,” said Hills East coach Mike Marotto. “We made too many mistakes in the first half. And the punt block dug the hole deeper.”

The Centereach defense kept the pressure on Martin throughout the first half. On one series, defensive end Josh Ackerler burst into the backfield and put a crushing hit on Martin jarring the ball loose. Matt Robbert scooped the fumble and returned it 24 yards to the Hills 36.

“We fly to the ball and we gang tackle,” Ackerler said. “The defense is the best part of our team.”

Hills East made it interesting to start the second half. The Thunderbirds stopped Centereach deep in its own territory and forced a punt. Two plays later, Anthony Scordio scored on a 14-yard run to make it 20-7 with 9:28 left in the third quarter.

The Hills East defense pitched a shutout in the second half, but it was too late.

“We kept the streak going,” Matt Robbert said. “Three years in a row with a home playoff game.”