Westhampton's Jaden AlfanoSt.John celebrates his third touchdown of the game against Half Hollow Hills West on Oct. 12. Credit: Peter Frutkoff

She was never far from his mind and always in his heart. And he felt the best way to celebrate the wonderful life his mom gave him was to make her proud.

Rose AlfanoStJohn died unexpectedly at the age of 55 on Sept. 6, a week before the start of the Westhampton Beach football season.

Jaden AlfanoStJohn, the Hurricanes’ senior halfback, had lost his biggest fan. Despite the devastating loss, AlfanoStJohn bounced back with an historic season.

He did it all.

He rushed for 1,570 yards on 224 carries, had 25 touchdowns and set a school record with eight interceptions in a single season. For his accomplishments, an 11-person committee selected AlfanoStJohn as the 60th recipient of the Carl B. Hansen Award presented to Suffolk’s best player at the Suffolk County Football Coaches Association banquet at the Hyatt Regency Monday night in Hauppauge. 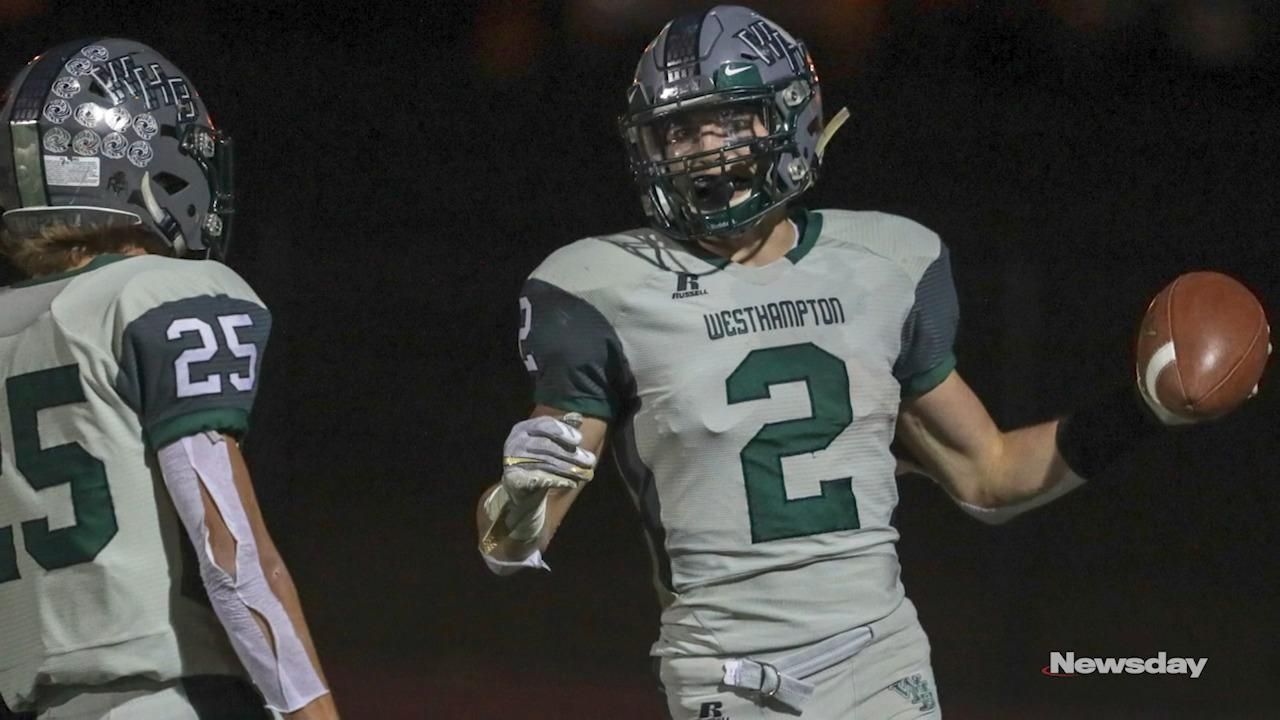 It was the third straight year that a Westhampton player took home the coveted Hansen Award. Halfback Dylan Laube won it in 2017 and middle linebacker Liam McIntyre in 2018.

“My mom loved football and she was so supportive of me and my brother,” AlfanoStJohn said. “I’d look up and see her screaming in the stands. I know she was watching over me all season. And this was all for her.”

AlfanoStJohn and his twin, Jesse AlfanoStJohn, were awarded the 12th Man Award, presented to players who have the courage to overcome adversity. Losing one’s mother the week of the season opener is extremely heartbreaking. These two turned tragedy into triumph with outstanding performances every week.

“We were devastated from losing Rose,” said Suzanne AlfanoStJohn, Rose’s wife. “Our boys were crushed. We’d been together for 25 years and I didn’t think . . . well, the day we buried Rose the boys said they needed to go to football in the afternoon and I knew she would have wanted them to be there with the team.”

The Westhampton Beach community rallied around the boys. And they in turn gave back with inspiring performances throughout the season. Jesse set a school record in a five-sack effort in a 31-21 win over East Islip.

And Jaden opened the season with a monster effort against Harborfields. He rushed for 212 yards and scored four touchdowns in a 55-0 win.

“My brother is also a great player and I believe we always inspire each other,” Jaden said. “We know we’re never in something alone.”

Consistency was the key to Jaden AlfanoStJohn’s season. He rushed for 177 yards and scored all three touchdowns in a 21-14 win over Half Hollow Hills West. In a workmanlike performance he carried 32 times for 205 yards and two scores in a 21-7 win over Eastport-South Manor.

“He’s the complete player,” said Half Hollow Hills East coach Mike Maratto. “He’s an impact guy all over the field. Offense, defense, no one would kick to him, way too dangerous.”

Trailing 24-7 late in the third quarter against Islip, Jaden AlfanoStJohn scored three touchdowns and intercepted two passes as the Hurricanes scored 27 unanswered points for a 34-24 comeback win. His 2-yard scoring run made it 27-24 and Jesse’s 20-yard touchdown reception from Christian Capuano sealed the win.

“We were never out of a game because he was such a big playmaker,” said Westhampton coach Bryan Schaumloffel. “He was a back with great vision, speed and balance. And on defense he was a ballhawk and had a knack for making the key play. He turned that game around.”

Jaden AlfanoStJohn saved his best performances for the postseason. He rushed for 303 yards and four touchdowns in a 39-24 win over Hauppauge. His 57-yard scoring run gave the Hurricanes a two-score lead.

His four touchdowns weren’t enough in a 42-27 loss to East Islip in the Suffolk Division III semifinals.

“It was disappointing losing to East Islip,” said Jaden, who accepted a full scholarship to play football at LIU. “When it was over, I couldn’t believe it. I knew we gave it everything we had.”

In three years, Jaden AlfanoStJohn had a 30-3 career record that included two undefeated league titles, seven playoff wins and a Long Island Class III title. He was part of a memorable 22-game win streak. He pounded opposing defenses for 2,701 yards on 357 carries and 42 touchdowns.

“It hasn’t been easy,” Suzanne AlfanoStJohn said. “The boys have been amazing. And I’ve been a nervous wreck because I’m the more emotional mush pod. I’m so proud of both of them. And for Jaden, he’s been through enough, and I didn’t want to see my kid crushed over awards. He was great.”

The pain of early September will always remain. But for one night, before all their peers, they celebrated a son who vowed to make his moms proud.

Past Hansen Award winnersNewsday's yearly award for most outstanding football player in Suffolk.