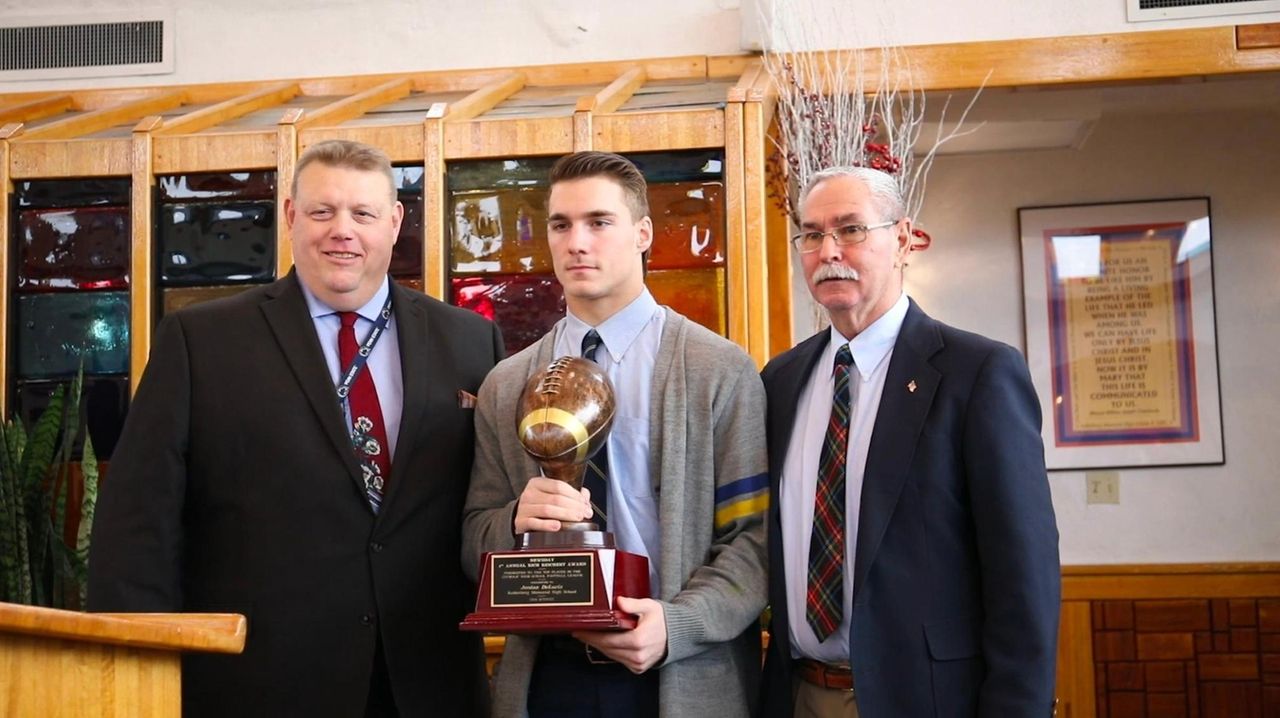 Jordan DeLucia’s final rush may have been his grandest. The senior halfback from Kellenberg took to the podium in the Millennium Room of Kellenberg High School and delivered a beautiful acceptance speech the same way he produced on the football field — with grace and humility.

“It’s a tremendous honor to stand here and be recognized by Newsday,” DeLucia said. “It means the world to me. I couldn’t be happier. I’m really blessed. I owe this to the support of my coaches, parents, trainers and especially my teammates, who helped put me in this position. Even when things didn’t go my way and I made mistakes, they were always there for me.”

DeLucia will attend Harvard and play halfback and special teams for the football team.

“He’ll be the first Kellenberg football player to ever play for Harvard,” Kellenberg coach Kevin Hanifan said. “We’re all excited for him.”

DeLucia was brought up to the varsity ranks as a sophomore, a rarity in the Kellenberg program. He was a part of two CHSFL AA championship teams and a 22-game winning streak. In 2018, he was the Firebirds’ leading rusher with 1,303 yards on the way to the school’s second consecutive title.

This year, after heavy graduation from a championship roster, DeLucia was leaned upon to lead a young Firebirds team. He did so in grand fashion. He was the main thrust of the offense, rushing for 1,931 yards and 23 touchdowns on 218 carries. He also had 31 receptions for 603 yards and six scores.

“He’s that guy that basically put the team on his back,” Hanifan said. “He was unstoppable even with everyone’s defense keying on him. He’s just an amazing athlete. He carried us when we needed him.”

DeLucia opened the season with a 256-yard, three-touchdown performance in a 54-26 loss to Cardinal Hayes, the eventual CHSFL AAA champion. He ran over the Cardinals to the tune of a 12-yards-per- carry average.

“He wasn’t fazed by them and knew a lot of the Hayes players knew him from the seven-on-seven workouts through the summer,” Hanifan said. “Hayes beat us and ended our winning streak, but they had so much respect for DeLucia, they were taking pictures with him after the game.”

DeLucia followed that loss with a big win over AA opponent St. Francis Prep. He rushed for 292 yards on 21 carries and three touchdowns in a 44-14 win.

“I thought Jordan DeLucia was a tremendous selection for the award,” said former St. Anthony’s football coach Rich Reichert, the CHSFL’s all-time wins leader. “I saw him play for two years and he was one of the best I’ve ever seen.”

DeLucia continued to pound opponents with big games. He had 251 yards rushing and four touchdowns in a 49-17 over St. Peter’s and finished with six games of at least 200 yards on the ground.

“He was the epitome of a kid who led by example,” Hanifan said. “He broke his right hand in the third quarter of a semifinal win over St. Peter’s. He helped us erase a 19-0 deficit for a 36-32 win with a four-touchdown game.”

DeLucia played his final game as a Firebird — a 29-12 loss to Chaminade — with his right hand in an orthopedic cast.

Said Hanifan, “He was a warrior.”