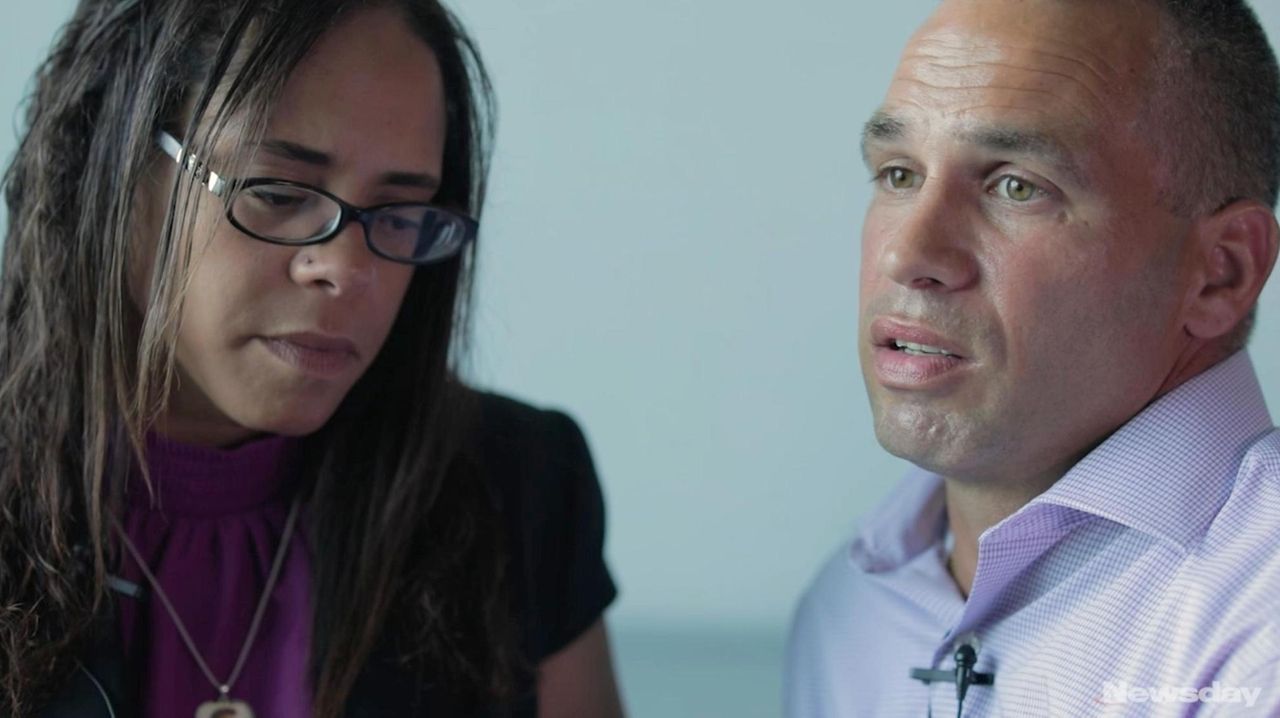 Angelo and Sayyida Mileto talk about the loss of their 16-year-old son, Joshua Mileto, who was killed in a training exercise during a football camp at Sachem High School East on Aug. 10, 2017.  Credit: Jim Baumbach and Yeong-Ung Yang

Sayyida Mileto fought back tears as she struggled to find the words to describe a parent’s worst nightmare.

“I still wait for his bedroom door to open and for him to just come out,” she said. “There are days when I cry all day.”

It’s been almost a year since her son Joshua Mileto, 16, died in a training exercise during a football camp at Sachem High School East.

In an emotional hourlong interview with Newsday, Joshua’s parents, Angelo, 47, and Sayyida, 42, described the second of their four sons as a fun-loving, witty and thoughtful teenager who loved to wear suspenders and bow ties.

Watch News 12 this morning to see the special report

“It’s important that people understand he wasn’t just a football player,” she said. “Up to this point, no one has actually spoken about Josh and who he is, what he means to us, how we’ve been affected, how we’ve been coping.”

“And what we lost,” her husband said.

The family had never spoken publicly about the Aug. 10 tragedy until now.

Joshua’s motto throughout life, they said, was “family first.”

They said their family — their three other sons are Nichalas, 23, Andrew, 13, and Jacob, 7 — has made it through this past year by sharing favorite memories about Joshua, often through laughter and tears.

“I just look at them and say, ‘I’m so so sorry you’re hurting,’ ” Sayyida said, fighting back tears. “ ‘If I could do anything to take that away I would.’ ”

It helps, the parents said, to talk about good times.

Such as when Josh secretly swapped out the salt at the dinner table for sugar and one of his brothers fell for it. Or how he once was caught on video by a friend dancing through a school hallway to a children’s cartoon song.

“A lot of our stories, when it comes to Josh, happens at our dinner table,” Sayyida said.

“That was our time,” Angelo said.

Joshua’s parents try to help their sons cope, and all have their own ways of dealing with the pain.

“I have my moments by myself,” Angelo said. “I go to the grave site. And if I need to hug Joshua, I lay on the ground, I put my hands on the ground. That’s my way of getting closer to him. I don’t do it in front of anybody.”

At home, Angelo said he finds brief moments when no one else is around to go Joshua’s bedroom door. “I kiss his door goodbye . . . and I tell him I love him,” he said.

Sayyida is open about her emotions.

“[My sons] will see me have moments and I will use that as a learning experience for them that it’s OK to express emotions,” she said. “It’s OK to come to me and talk to me if you’re having a bad day about Josh.”

She also embraces her sons more than ever — “Just hug me,” she said she tells her children. “Hold on to me. Don’t let me go.”

“I’ve kind of re-evaluated a little bit of what’s really important,” she said.

Sayyida and Angelo said they appreciate the Sachem community, from their friends to strangers, for being there through such a difficult time.

Sayyida recalled rushing through a store to buy dog food when a woman came up to her and said, “Can I just give you a hug?”

And then there are Joshua’s friends and teammates, some of whom come to the Mileto house in Farmingville to visit Joshua’s bedroom, play catch with Jacob or take Andrew out for a burrito.

“He had such a sense of family, and it was unique for someone so young,” said Sayyida, adding that Joshua’s favorite sport was baseball, that he loved dancing and he was a Boy Scout.

When his great-grandmother Rita Ancharski suffered a stroke a few years ago, Joshua, then 13, visited her regularly at a nearby assisted-living facility — and he wound up making several new friends in the process.

“He would sit in the theater room, make himself hot chocolate and talk with the other residents,” Sayyida said. Angelo laughed at the memory, saying sometimes it would take the family a half-hour to leave because Joshua was busy talking to everyone.

Purple was Joshua’s favorite color, and the parents honored his uniqueness at his funeral last August by wearing purple shirts, bow ties and suspenders. And they also want people to know the color of his coffin was “the most spectacular metallic purple, obviously for a reason.”

The coffin’s color was reported as black, which Sayyida said “always bothered us.”

In December, the family filed a $15 million negligence lawsuit against both the Sachem Central School District and the Sachem East Touchdown Club, a booster club that was running the football camp on school grounds. Joshua died after a log that he and a handful of teammates were carrying as part of a relay race fell and struck his head. According to the lawsuit, the log weighed several hundred pounds.

Their attorneys, Jay Dankner and Rick Lasher, who sat in on the Newsday interview, said they instructed the parents to not discuss the circumstances of Joshua’s death, citing the litigation. Both the district and the booster club have denied liability for Joshua’s death in court papers.

As the anniversary of Joshua’s death nears, the parents said they try to keep the focus on the good times.

“You can’t find meaning,” Sayyida said. “He was 16 and beautiful and smart and funny.”

The family is planning a celebration of his life on Friday, the anniversary. The goal is for the people who knew Joshua to gather and share their memories. It’s also the family’s way of thanking the community for its support.

They expect many of Joshua’s friends, classmates and teammates to attend.

“I know the school year was very difficult for them,” Sayyida said. “It’s really important to me that they’re OK.”