Connetquot's Drew Guttieri drops back to pass in the second quarter during a Suffolk II football game against host Newfield on Saturday. Credit: Bob Sorensen

David Adegoke, Centereach: His blocked punt resulted in a touchdown, and returned a fumble 52 yards to set up a score in a 20-7 win over Half Hollow Hills East.

Jaden AlfanoStJohn, Westhampton: He rushed for 82 yards and three touchdowns, picked off two passes and scored the go-ahead touchdown in a 34-24 come-from-behind win over Islip.

Nicholas Capazzola, Eastport-South Manor: He rushed for 75 yards and two touchdowns on five carries and caught four passes for 87 yards and one score in a 42-28 win over Amityville. and added eight tackles and three sacks

Drew Guttieri, Connetquot: He totaled 375 all-purpose yards and threw for three touchdowns in a 21-12 win over Newfield. 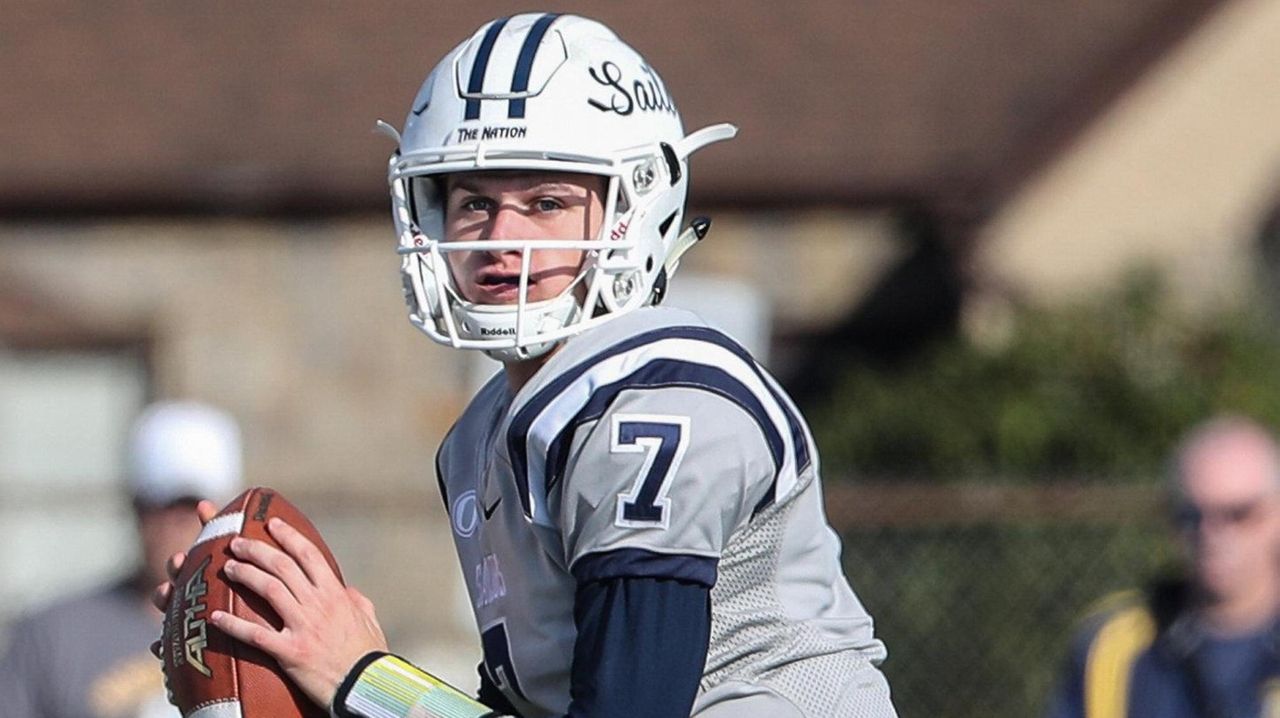 Connor Healy, Plainview-Old Bethpage JFK: He rushed for 210 yards and two touchdowns on 13 carries in a 28-14 win over Syosset to clinch a playoff berth.

Luke Kirchner, Lawrence: He had 10 tackles, five for a loss, two sacks, two forced fumbles and a fumble recovery in a 35-10 win over Floral Park.

Charlie McKee, Oceanside: He completed 35 of 50 passes for 301 yards and five touchdowns, including the winning 19-yard TD as time expired, in a 34-33 win over Massapequa.

Jack Montalvo, Patchogue-Medford: He booted a 49-yard field goal in a 30-14 win over Bay Shore.

Rob Nunez, Valley Stream Central: He rushed for 79 yards and three touchdowns on 14 carries and had a four-yard interception return for a TD in a 34-0 win over Sewanhaka. He also had eight tackles.

Jack Schirtzer, Mount Sinai: He had six tackles, two sacks and blocked a field goal in a 21-0 win over Bayport-Blue Point.

Thomas Schmitt, Oceanside: He caught 12 passes for 113 yards and two touchdowns, including the winning 19-yard TD as time expired, in a 34-33 win over Massapequa. He also made six tackles.

Matt Tarantola, Mineola: He had 11 rushes for 202 yards and three touchdowns in a 49-20 win over Glen Cove.

Ethan VanDerBrink, Smithtown West: He had a sack on fourth down at the 35-yard line with 52 seconds remaining to secure a 20-13 win over Deer Park. He had 16 tackles, including five for a loss, and a forced fumble.

Mark Weber, South Side: He kicked a game-winning 22-yard field goal with six seconds left and in a 24-21 win over Bethpage. He also kicked all three extra points.