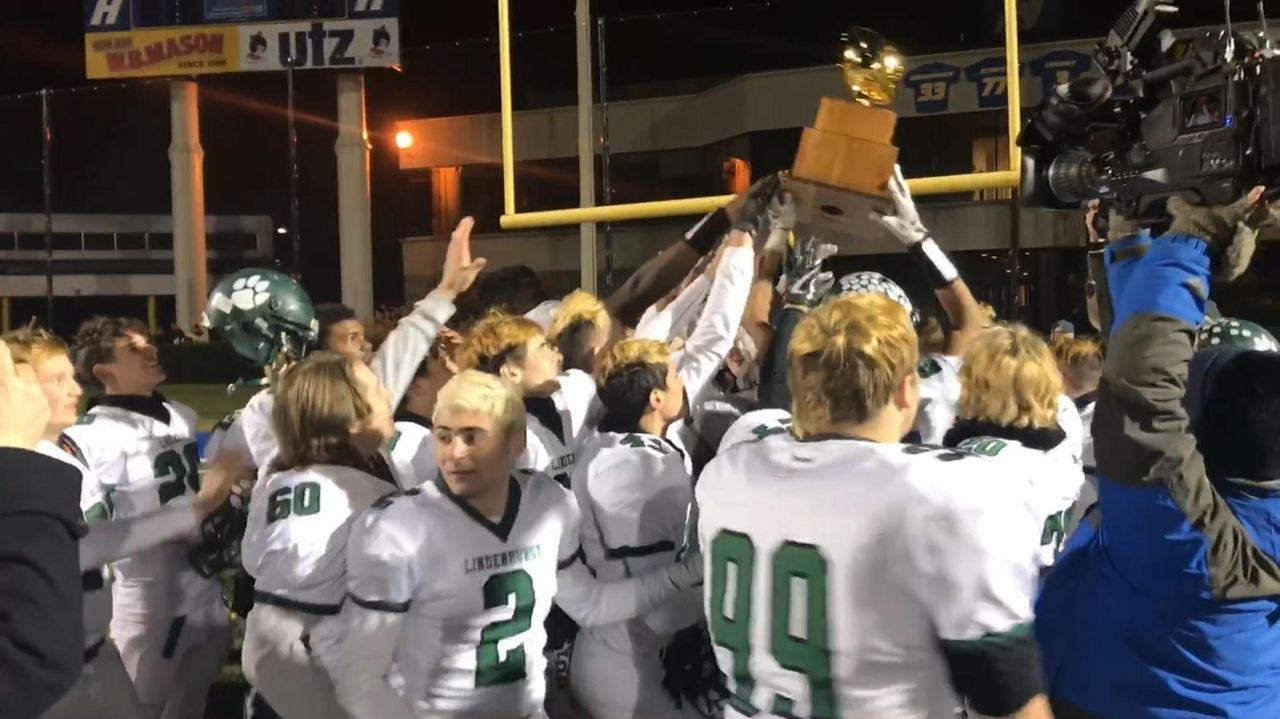 Sunkonmi Agunloye palmed the championship trophy with his massive hands and pushed it toward the sky for all to see.

He had every reason to be pumped. His blocked punt set up halfback Jaden Barber’s 55-yard touchdown run in the fourth quarter as Lindenhurst came back from a 13-point deficit for a 14-13 win over Garden City on Saturday in the Long Island Class II championship game before a crowd of more than 2,500 at Hofstra’s Shuart Stadium.

Garden City responded to Lindenhurst’s first touchdown with an 11-play, 53-yard drive to the Bulldogs' 35 before being forced into a fourth-and-15. Then Agunloye blocked the punt.

“It was the break we needed,” senior captain Will Ruckert said. “A huge defensive play to set up our offense for that final winning drive.”

Three plays later, with fullback Jack Winey cleaning the linebacker in a wicked collision, Barber raced around the left end and bolted into the open field untouched to tie the score at 13. Nick Antos drilled the extra point for a 14-13 lead with 5:36 left.

“The block will go down as one of the greatest plays ever,” Lindenhurst coach Nick Lombardo said. “They were trying to pin us deep in our own end.”

The comeback denied Garden City (10-2) a fourth straight Class II title, which would have been a Long Island record for any class. It was the second Class II title for Lindenhurst (12-0), which won the Class I crown in 2017.

The game was a rematch of last year’s 19-0 Garden City win.

“It was our goal to get back here and win the title,” Ruckert said. “We beat a great program. They were disciplined, hard-hitting and everything we expected.”

In the 28th year of the Long Island Championships, Garden City made its LIC-record 18th appearance.

The three-time defending champions showed some grit after Lindenhurst opened the game with a 21-play, 77-yard march to the Trojans' 3. The Bulldogs had six first downs, including two fourth-down conversions, but were denied when a 20-yard field-goal attempt went wide left. The drive consumed an astounding 11:26.

On fourth-and-1 from inside the Lindenhurst 1, halfback Ford Carney took a pitch left, avoided a hit in the backfield and made his way inside the pylon for the touchdown. Chase Gardi's extra point made it 7-0 with 4:41 left in the half.

“We all knew this was going to be a defensive battle,” Winey said. “It was brutal. Some of the collisions were vicious.”

Garden City opened the third quarter with an impressive five-play, 75-yard scoring drive. On third-and-5 from the Trojans' 30, Luke Schmitt threw a screen pass to Carney, who followed three blockers down the sideline for 45 yards.

On the next play, Archer followed a pancake block from Juliano Izzo and went 25 yards around right end to give Garden City a 13-0 lead with 9:47 left in the quarter. The extra point was blocked by Warren Dixon, though, and that proved to be a key play.

“A two-touchdown deficit against Garden City is not a good position to be in,” Lombardo said. “But we’re resilient and our guys flipped the switch in the second half — especially Barber. We showed some real mettle.”

Lindenhurst responded with a 16-play, 78-yard drive capped by Barber's 5-yard touchdown run. Nick Antos added the extra-point kick to get within 13-7 with 1:16 left in the third quarter. The Bulldogs methodically picked up six first downs, including Randazzo’s fourth-down quarterback sneak for 3 yards to the Trojans' 15.

“We had our opportunities to finish it and win the game,” Garden City coach Dave Ettinger said. “We’re a young team that kept getting better all season. And I’m just thinking about guys like our seniors like Christian Sullivan who played so well. It was a similar game to last week’s Nassau final.”

This time, though, Garden City couldn’t find the magic it needed. A double-pass from Schmitt to Archer and back to Schmitt from the Trojans' 20 was intercepted by defensive back Matt Newman with 1:43 left, sealing the Lindenhurst win.

“He made a nice play on the pass,” Lombardo said. “He’s had a couple of big interceptions.”

None bigger than this one.