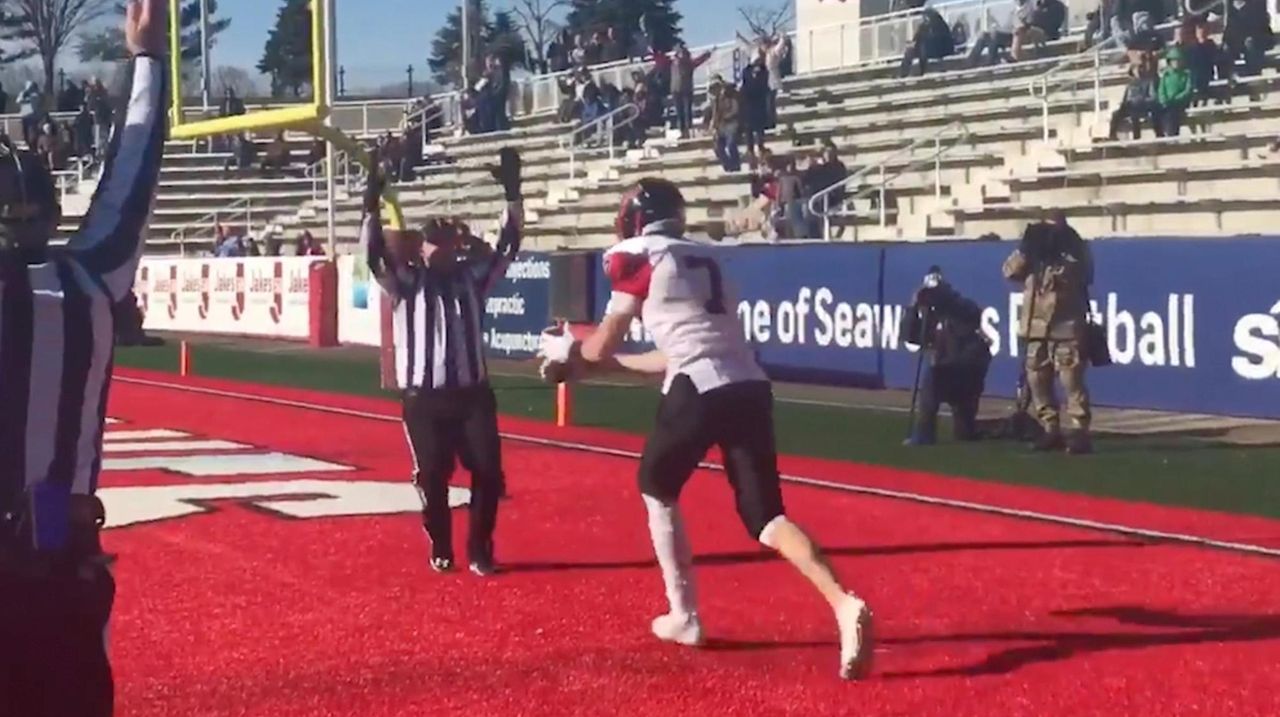 Quarterback Dan Villari promised to bring Plainedge its first Long Island football championship this year, and on Friday, the senior delivered in a big way.

Villari ran for four touchdowns and passed for two more as Plainedge beat Sayville, 56-20, to claim the school’s first Long Island Class III championship on Friday before a crowd of more than 3,000 at Stony Brook University’s LaValle Stadium.

Villari rushed for 306 yards on 24 carries and passed for another 65 for the Red Devils, who opened a 35-14 lead at the half. Plainedge finished the season with a 12-0 record for the first time in school history.

Dan Villari with the extra effort and then some. Extra point is good and Plainedge takes a 7-0 lead. 9:05 1Q. pic.twitter.com/8GJjyZoUY6


Dan Villari takes it 77 yards for a touchdown to give Plainedge a 28-7 lead over Sayville. pic.twitter.com/WX6E47Yfo3


Villari, who suffered a broken arm in last year’s 34-6 loss to Half Hollow Hills West in the Class III final, vowed to return bigger and better than ever and bring home the championship hardware.

Cradling the championship trophy, he stood in the west end zone and reflected on the past year.

“The arm injury was devastating to our team last year and it made me work so hard to be in the position to win a Long Island title this year,” he said. “Our whole team committed to the goal of being Long Island champions. And it was a total team effort. Our line, our defense, the wide receivers and backs blocking for each other — it all came together.”

But it all starts with Villari, a 6-3, 215-pounder. He’s a kid who refuses to be tackled in the open field and prides himself on yards after contact.

“Dan’s the best. He deserves this,” Plainedge coach Rob Shaver said. “He’s the ultimate leader. Of course, he shouts out about his line and our backs. And he talks about our defense. He’s a team-first guy, a complete winner.”

Plainedge opened the scoring with a four-play, 77-yard drive capped by Villari’s 6-yard touchdown run. Braden Clark made the first of his eight extra-point kicks, a Long Island Championships record. The drive was highlighted by a 21-yard run by Villari in which he hurdled a defender for a first down.

Villari extended the lead with a 44-yard touchdown pass to Donovan Pepe for a 14-0 lead with 3:34 left in the first quarter.

“He put it right on the money,” Pepe said. “And I made sure I got into the end zone.”

Pepe caught his second touchdown pass, this one a 21-yarder, for a 21-0 lead early in the second quarter.

“We had the same amount of people at the point of attack and couldn’t stop them,” Sayville coach Reade Sands said. “They were the better team. They have a running quarterback who is an absolute dude, and they block really well.”

Sayville responded on the next possession. Cheshire hit C.J. Messina on a slant for 44 yards and finished the drive with a 14-yard TD pass on a perfect fade to Jayson Gensch in the back corner of the end zone. Michael Argenziano’s kick made it 21-7 with 8:55 left in the half.

Two plays after the kickoff, Villari went 77 yards around the right end and followed a couple of big blocks on the perimeter from Clark and Pepe for a touchdown and a 28-7 lead. He added a 46-yard scoring run with 4:46 left in the half for the 35-7 lead.

“We’re relentless in our blocking and being a team of selfless players,” Shaver said. “And I can’t say enough about our line coach, Kevin Spellman, and the job he’s done. We have a bunch of new guys out there on the O-line doing a great job.”

Cheshire added a 4-yard TD pass to Nathan Casaburi before the half ended to make it 35-14. It was his 43rd touchdown pass of the season, a Long Island record.

Plainedge opened the second half with an eight-play, 55-yard scoring drive capped by Dion Kuinlan’s 31-yard run. Villari scored on an 8-yard run and Kuinlan (137 yards on 17 carries) later added a 6-yard run that completed the Red Devils’ scoring.

“I waited for the flow of the defense and I put my foot in the ground and made my cut on the first touchdown,” Kuinlan said. “It’s easy when everyone is on board and blocking. It makes for a championship team.”

All of the Plainedge players delivered on Villari’s promise.

Cheshire, Sayville looking ahead to next seasonThe junior quarterback will be back to build on his historic season and help the Golden Flashes try to win a Long Island title. Class III LIC: Plainedge vs. SayvilleSenior quarterback Dan Villari rushed for 306 yards and four touchdowns on 24 carries and ... LI's past football championsA database of every county, LI and CHSFL champion dating to 1946. History of the Class III LI ChampionshipA look back at LI's best in Class III since 1992.