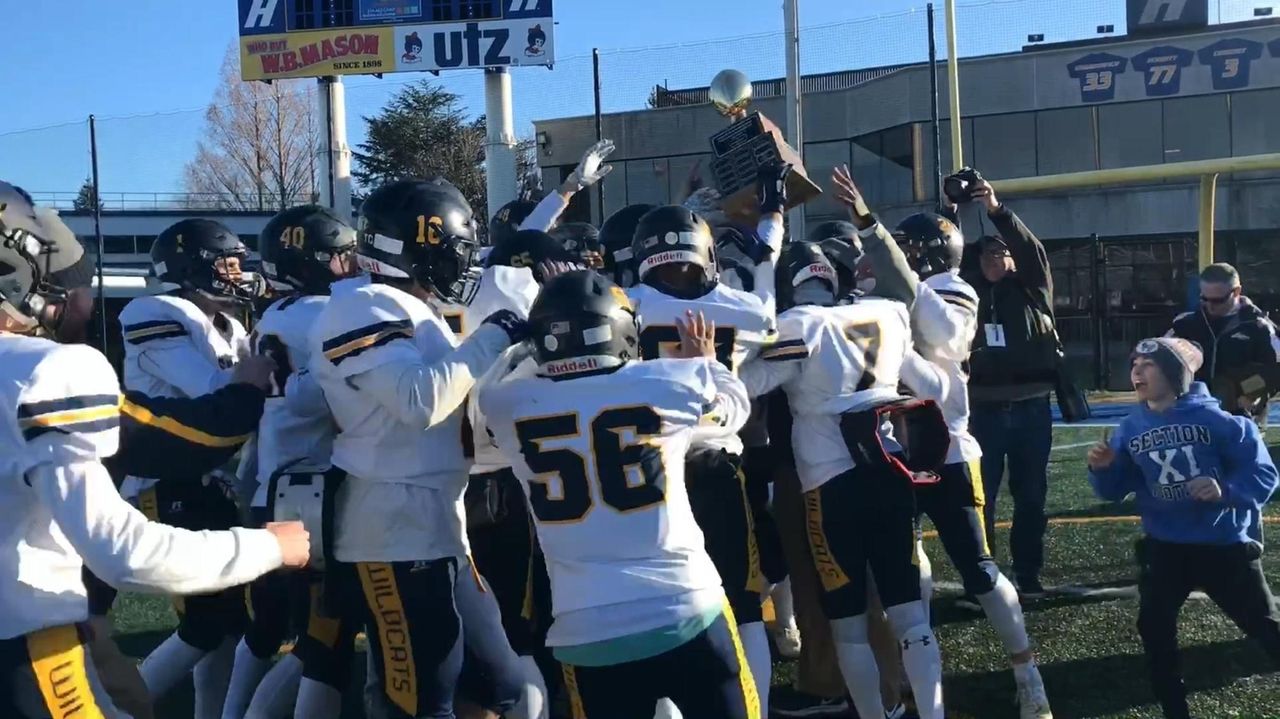 Shoreham-Wading River has spent the 2019 football season challenging everyone to keep up.

It turned out that no one could.

Senior quarterback Xavier Arline turned in one of his best performances in a stellar high school career by rushing for 252 yards and four touchdowns on 25 carries and throwing for 80 yards and two more scores.

“He is just a magician. You put the ball in his hands and you know something extraordinary is going to happen,” junior guard/linebacker Jake Eckert said. “His last football game? No surprise what you saw here.”

Shoreham-Wading River (11-1) won its fourth Long Island championship, all in the past six years. In four postseason games, the Wildcats averaged 44.5 points, averaged a 34.3-point margin of victory and avenged an Oct. 12 loss to Mount Sinai by toppling the Mustangs for the Suffolk IV crown.

“This is when you want to have the momentum,” Arline said. “We started rolling and didn’t stop.”

The Shoreham-Wading River defense was every bit as impressive as the offense. Senior linebacker Mike Casazza had eight of his 12 tackles and the Wildcats allowed 1.8 yards per snap in building a 35-0 halftime lead.

Arline’s two touchdown passes — 9 yards to Jake Wilson and 35 to Casazza — staked the Wildcats to a 14-0 lead less than seven minutes into the game. He added touchdown runs of 6, 51 and 67 yards before halftime and a 54-yarder in the third quarter, when he also made an interception.

“We always want to get back here,” Arline said, referencing last season’s Long Island Championships loss to Cold Spring Harbor. “This is the goal — but to win it. So now it's finally complete. There's no better way to finish a career.”

“He's just a gamer. When [we] are in critical situations, I think he understands the moment and he has the ability to seize that moment,” Wildcats coach Aden Smith said. “He definitely wasn’t going to come away from here without taking advantage of the opportunity … He’s just a tremendous competitor. It wasn’t this game, it’s who he is.”

David Tedesco ran for 86 yards, including a 29-yard touchdown, and Anthony Giordano had a fumble recovery for Shoreham-Wading River.

Craig Ackerman had 10 tackles and caught an 8-yard touchdown pass from Logan Masters for Seaford (10-2).

The Wildcats' road to the title had some twists. Smith was removed from the head-coaching position on Sept. 6 when the school announced it was conducting an investigation of an incident involving Smith and an Islip player that occurred in an Aug. 30  scrimmage, and he was reinstated about 2 1/2 weeks later. The team's fans also watched closely after Robert McGee left his spot as the starting quarterback at St. Anthony’s to transfer in. Would he and Arline mix well?

“I think that was all just fuel for us,” senior two-way lineman Matt Zahn said. “All those things that made people doubt made us want to succeed more and more. And it just shows that we’re a family and we can overcome any adversity.”

“We’ve got a special, resilient bunch,” Smith said. “From the community to the kids, everybody remained even-keeled and poised despite whatever side turns and alternate routes we had to take to get here.”

Smith and McGee seemed especially grateful to bask in the championship light. It’s a finish that seemed improbable or impossible at season’s start.

“This destination was always our goal and I was glad that I was able to be a part of it and help the team accomplish this,” Smith said.

“When I transferred, this was the ending I hoped for,” McGee said. “To get it is just awesome.”