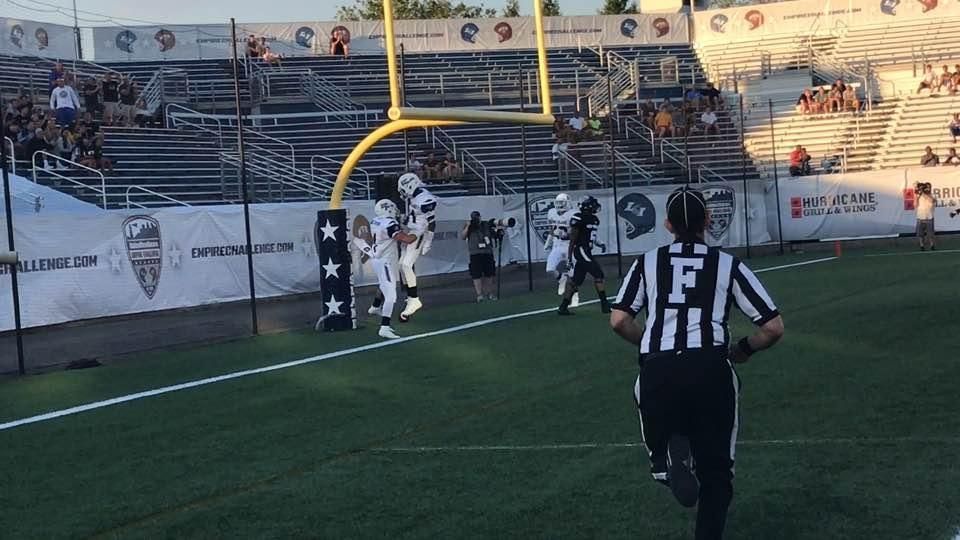 Special teams turned the 22nd Empire Challenge into something special.

Until the wild finish, a crowd of 8,621 was treated to an aerial show. NYC MVP quarterback Christian Anderson completed 16 of 27 passes for 215 yards and two scores and Long Island’s MVP Aaron Ruthman of Elmont was 10 of 18 for 149 yards and three touchdowns. Long Island, which has lost the last two in dramatic fashion late, leads the series 12-8.

Dominic Pryor of Ward Melville caught five passes for 89 yards and two scores. The game-winning kick was set up by a 15-yard penalty against Long Island for a late hit that moved the ball to the 15.

Three times in the first half, Ruthman answered a New York City touchdown with a scoring drive, allowing Long Island to grab a 21-19 halftime lead. Ruthman’s first two passes were incomplete, but Jordan McLune danced his way for runs of 17 and 13 yards to keep the drive alive.

“It was a great route. It depends on where the safety goes and we pick and choose,” Ruthman said. “Jordan’s runs gave me some breathing room.”

On Ruthman’s next possession — he alternated drives all night with Freeport’s Rashad Tucker, who was more of a running threat — he found Dominic Pryor of Ward Melville twice for big yardage. The first connection went for 18 yards to the New York 40 and the second was for 28 yards to the 5. Two plays later, McLune plowed in from the 1 and Christian Carrick’s extra point put L.I. on top, 14-13.

After New York City retook the lead, 19-14, Ruthman and Pryor struck again. On fourth-and-seven, Ruthman hit Pryor on a wheel route in the corner of the end zone for a 24-yard touchdown pass. “The coaches made up the play during the timeout. We didn’t practice it that much,” Ruthman said. “But we had to throw it to the end zone and I put it on his outside shoulder.”

Long Island scored the only touchdown of the third quarter, as the offenses slowed considerably from the first half when the teams combined for 512 yards. Once again it was the tag-team combination of Ruthman and Pryor getting it done. Ruthman was sacked for a 12-yard loss on the drive, but Long Island got that yardage back on a pass interference call that put them into the red zone.

Ruthman hit Pryor right at the goal line for a 17-yard score and Carrick’s kick made it 28-19.

But New York, held to 17 yards in the second half until midway through the fourth quarter, exploded for a five-play, 75-yard drive that was capped by a 45-yard touchdown from Christian Anderson to Seba Nekhet. The PAT made it 28-26.

New York’s defense forced Long Island to punt from deep in its own end and the city took advantage of the favorable field position to score on Siddiq Muhamad’s 12-yard run that made it 34-26.

Then came a couple of special deliveries.