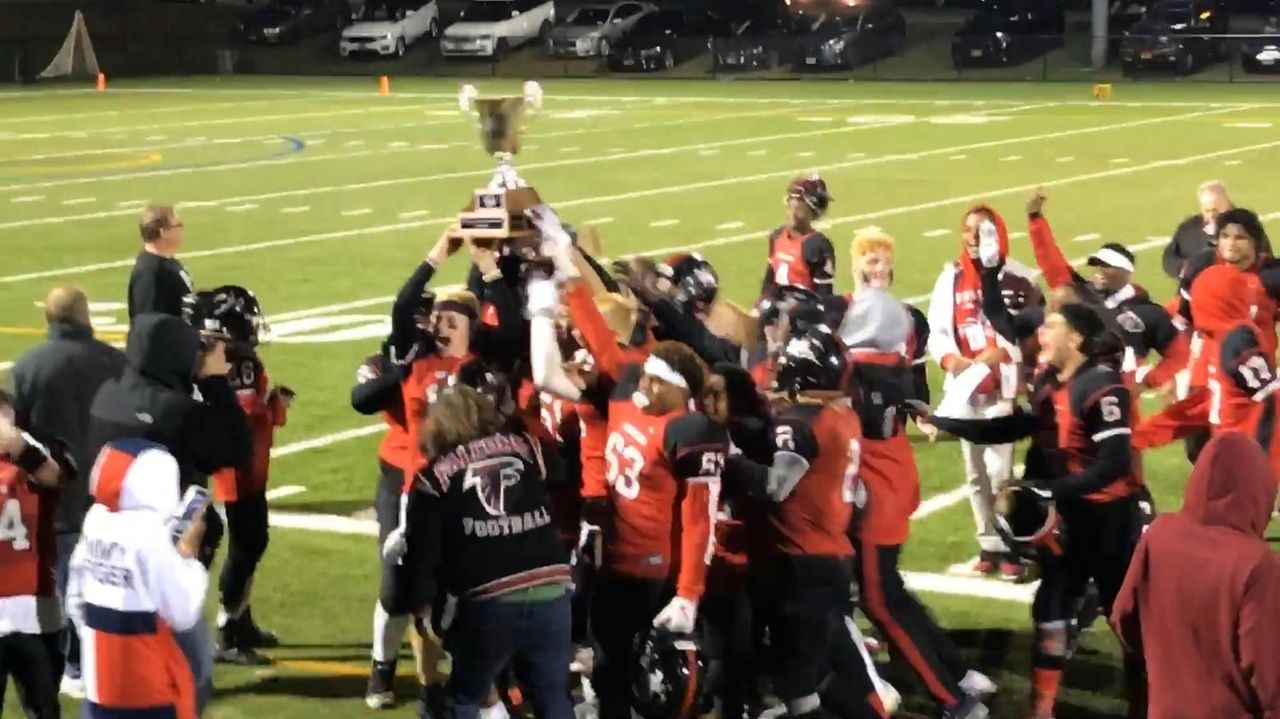 GREENWICH, Conn. — According to coach Chris Reno, Long Island Lutheran’s football program entered this season without a single postseason appearance on its resume. But moments after the Crusaders concluded the 2019 campaign, they found themselves triumphantly hoisting a championship trophy.

“I’m just so happy that we finally pulled together; the defense played great and they got us the win today” quarterback George Rosenberg said, as Long Island Lutheran held on to take down Hopkins (New Haven), 13-12, in the Metropolitan Independent Football League championship game on Saturday night at Brunswick School.

Because of their previous independent standing, LuHi (8-1) had been ineligible to compete in postseason play before this season, said Reno, who has been the head coach for 21 years.

“It’s an incredible feeling and a testament to these young people and this coaching staff,” Reno said. “It’s been a long haul.”

Leading 13-12 after surrendering a 43-yard touchdown pass, LuHi’s defense came up with crucial stops on both a potential go-ahead two-point conversion pass attempt with 5:05 remaining and Hopkins’ final drive. The Crusaders recorded back-to-back sacks on second and third down before stopping the Hilltoppers at the LuHi 48-yard line five yards short on fourth down.

Punter Adam Campbell extended the LuHi lead to 13-6 with 8:58 left in the third, evading multiple tackles down the right sideline and finishing off a fake punt with a 52-yard touchdown run. The Crusaders then failed to convert a two-point conversion running attempt.

Sensing that his team was in need of a spark, Campbell said that the decision to run the fake was solely his own, and not Reno’s.

“I usually get in trouble for running the fake punt,” Campbell laughed. “But I saw the gap and I just took out to the open field and got to the end zone. We had all losing seasons my first three years. I waited my whole high school career for this. I feel so blessed.”

“Adam’s done this before and most of the time it works out,” Reno said. “So there’s a level of trust there.”

Fullback Nick Genova punched the ball into the end zone thanks to a strong second effort on 4th and goal at the goal line to open the scoring, giving LuHi a 7-0 lead with 1:27 remaining in the first quarter. The scoring play capped off a 70-yard drive that took over nine minutes following a fumble recovery by Genova on the first drive of the night.

“All last night I was just thinking about how I could help my team and how I needed to make big plays,” Genova said.

Hopkins got on the board just before halftime, as Pearson Hill cleanly stripped a LuHi receiver and returned it 56 yards down the right sideline for a touchdown. The ensuing extra point was missed, however, and the Crusaders entered halftime with the lead intact at 7-6.

Dynamic running back Jeremiah Colclough set the tone for LuHi with 125 yards on 26 carries. He believed his team possessed this same championship potential entering the season.

“Everybody just kept working so hard all season,” Colclough said. “Nobody ever tapped out.”