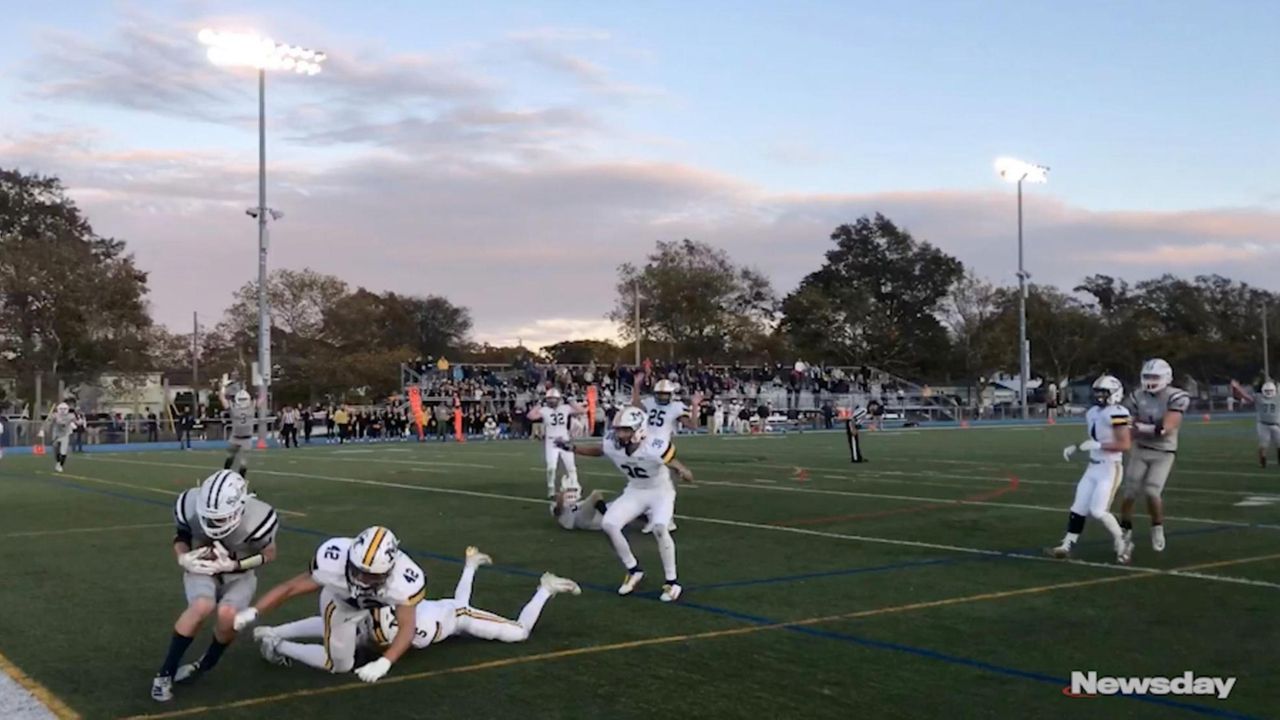 Charlie McKee didn’t have much time. Flushed from the pocket and rolling left with the Massapequa defensive line on his tail, Oceanside’s 15-year-old sophomore quarterback threw a precision pass off his left foot.

Wisely, wideout Thomas Schmitt had followed McKee’s path and found himself in the corner of the end zone, where the ball found him.

The next 30 seconds were something out of a classic sports movie. Schmitt’s teammates mobbed him and Oceanside’s student section stormed the field before security ushered them back toward the stands.

Schmitt, who was nursing a shoulder injury and was questionable to play, caught the winning 19-yard touchdown as time expired, leading Oceanside to a 34-33 victory over Massapequa in Nassau Conference I football on Saturday.

“I just looked back at [McKee], and he was running for his life, so I was just trying to match him, get to a spot where he could throw it,” said Schmitt, who caught 12 passes for 113 yards and two TDs. “He was running to his left, and I just tried to get over there and give him a chance.

“It went right into my hands. What a ball.”

The moment, set up by two straight pass interference calls against Massapequa and an 8-yard reception by Schmitt, capped a comeback from a 33-21 deficit with 5:22 remaining.

Oceanside (6-2) led 21-14 after McKee connected with Nick Platia for a 2-yard TD with just over seven minutes left in the third quarter. But the first six-plus minutes of the fourth quarter belonged to Terence Gallivan of Massapequa (6-2).

He took the period’s first play for a 50-yard TD run, tying the score at 21. After a three-and-out by Oceanside, Juan Arango returned a punt 61 yards to the 3-yard line, setting up a 3-yard TD run by Gallivan.

Oceanside then produced an empty four-minute drive that ended when Dan Meaney sacked McKee for a 5-yard loss on fourth down. Gallivan took the next carry 62 yards for a TD, and Platia again blocked the PAT.

Trailing 33-21, Oceanside marched 59 yards on nine plays. Thomas Flavin took a short pass from McKee up the middle for an 11-yard score. Frank Morizio made it 33-28 after the PAT.

With 2:33 left, Oceanside’s onside kick attempt failed when Timothy Morrow fell on the ball to secure possession. Gallivan rushed for a first down on the first play, but the Sailors stuffed the next three runs, capped by Joe Ruggieri’s tackle on third down, forcing a Massapequa punt. Ruggieri made 10 tackles.

Oceanside then needed 32 seconds to go 70 yards (aided by the two interference calls) to earn its magical win.

“He just kinda rolled out, I screamed out, ‘Schmitty!’ and he just kinda threw it up in the air,” coach Rob Blount said. “Schmitty’s one of our captains, and he wasn’t supposed to play this game, but he didn’t want to miss senior day.”

It was a perfect pass to Schmitt, but one that McKee said required a bit of luck.

“At the beginning of the play, I was looking for [Daniel Mullin] on the over-route,” McKee said. “I saw he wasn’t there, so I flushed out left. I just saw my two best receivers in [Schmitt} and [Platia], I closed my eyes and I kinda just threw it up, to be honest.”

And the moment, as uncertain as it originally seemed for Schmitt, became something he’ll always remember.

“I hurt my shoulder two weeks ago against Plainview, and I’m so happy I decided to play,” Schmitt said. “Got this brace and I was able to go. This is amazing. I can’t find another word to describe it. It’s just . . . unbelievable.”

Podcast Player of the WeekOn episode 39 of Newsday's High School Sports Podcast, Oceanside's Charlie McKee was named the ... Photos: Oceanside football vs. MassapequaScenes from Oceanside's last-second win over Massapequa in Nassau Conference I.