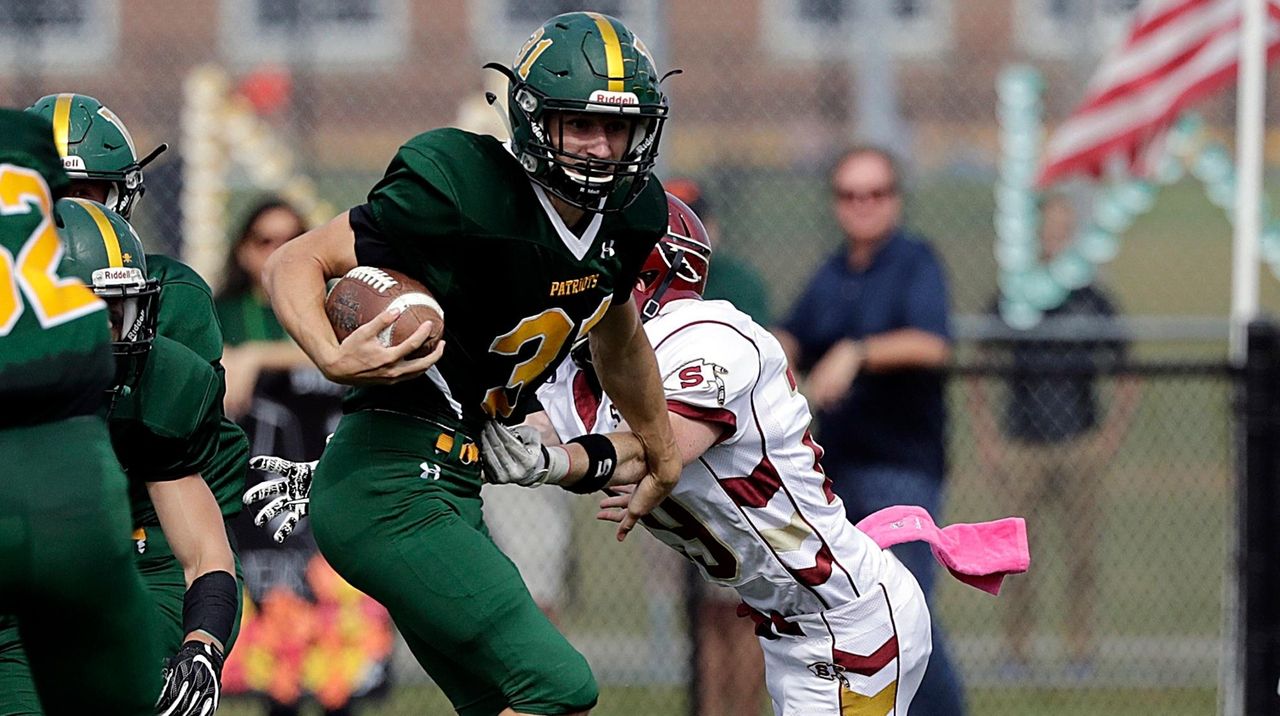 Nick Messina was almost afraid to look back.

Ward Melville’s multipurpose threat had returned three kickoffs for apparent touchdown this season, only to have all three called back because of Patriots penalties. But Messina liked what he saw Saturday against Sachem East after he returned the opening kickoff 93 yards for a TD.

“I saw my teammates running after me and there were no flags,” Messina said. “It was perfect.”

While Messina and host Ward Melville weren’t perfect, they certainly were impressive. Messina accounted for 233 yards of offense and three TDs, and the tenacious Patriots defense pitched a shutout in a 32-0 Suffolk I win before a homecoming crowd of nearly 1,000.

“It was nice to see him finally get one because he deserves it,” said Ward Melville coach Chris Boltrek of Messina’s opening kick return. “He’s a special athlete. He gets a seam and he’s gone.”

“We were upset with how we lost those two games,” said Patriots two-way lineman Thomas Kutchma. “We were already hyped and ready to play, but after [Messina’s return] we wanted it even more.”

The Patriots scored on the opening drive of the second quarter when quarterback Peyton Capizzi found Marcus Velez with a 20-yard touchdown pass to give Ward Melville a 12-0 lead 1:21 into the period.

The 6-4 Velez was a matchup nightmare for Sachem East (3-2) throughout the afternoon. The wide receiver had seven catches for 89 yards. Capizzi, who rushed for 63 yards on 10 carries, was 10 of 16 passing for 110 yards with a touchdown and an interception.

Messina scored his second touchdown on a 40-yard scoring run with 4:16 left in the first half to give the Patriots an 18-0 halftime lead.

One of Messina’s biggest runs came in the third quarter on a fake punt. Stephen Torrico threw a great block to spring Messina 21 yards on fourth-and-4 from Ward Melville’s 45.

“Sometimes,” Boltrek said, “you have to let your athletes make plays.”

Three plays later, Messina scampered in from 2 yards out. He ended the day with 140 yards rushing on 17 carries. Capizzi found Nick Troy with a two-point conversion pass and the lead was 26-0. After Patriots cornerback Christian O’Toole recorded his second interception of the game, Troy scooted in from Sachem East’s 20 to close the scoring.

Boltrek said while other players on Long Island might get the ball more than Messina, the tailback makes the most of his touches. None of that matters to Messina.

“I trust coach and the quarterback,” Messina said. “At the end of the day as long as we win, that’s fine by me.”