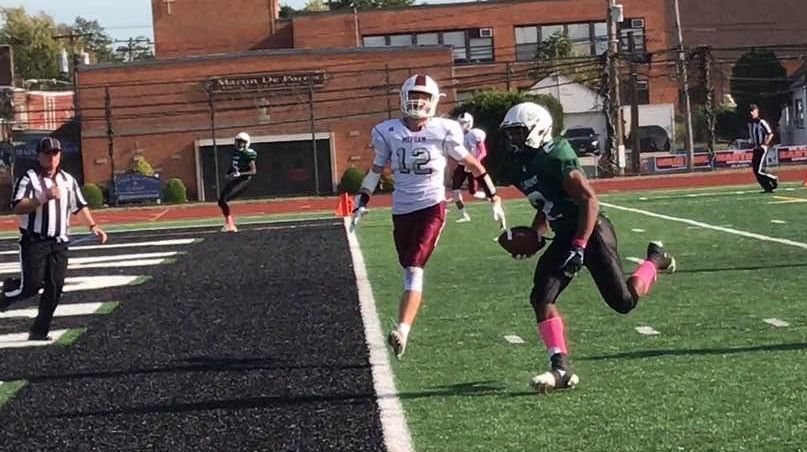 Michael Djalo needed a few extra seconds to get to his feet after reeling in a fourth-quarter interception. But he never thought that would be his final play on the field.

“I just had to keep pushing through,” Djalo said. “It’s more of a mental game for me. If I know I can do it, my body will take me there and after my body can rest up.”

One play later, Djalo ran a game-sealing 91-yard touchdown, his third score of the game, to lead host Elmont to a 48-28 victory over previously undefeated Mepham in Nassau II football Saturday afternoon.

“We had to come out here and show out for everyone because we had a lot of doubters,” receiver Chester Anderson said. “We wanted it the most. As Spartans, we don’t like to give up, so that put a lot of fire under our behinds.”

Djalo was visibly shaken up multiple times on the field, but refused to out of the game. He finished with 175 yards on 15 carries to go along with his three touchdowns, an interception and fumble recovery.

“I just felt it for my team,” Djalo said. “This is all one team, it’s not just me that I’m focused on. I just had to go out there and play for my team.”

Elmont’s defense, which was only the second team to hold Mepham (6-1) to fewer than 35 points in a game this season, forced four turnovers to fuel the victory. Anderson chased down a receiver at the 5-yard line to strip and recover a fumble to take away a Mepham touchdown.

“I wanted the ball, I was hungry,” said Anderson, who also had five receptions for 63 yards and a touchdown and four rushes for 58 yards. “I didn’t like that right there. I wanted to win. We wanted to win.”

In Mepham’s following possession, Elmont linebacker, and starting center, Kaurice Jones intercepted a ball that hit off a receiver’s hands, then another player’s helmet, and Jones ran 60 yards for the touchdown to give Elmont a 21-7 lead.

“I saw the ball in the air and I just saw daylight,” Jones said. “I just knew that it was my time to shine. Linemen don’t usually get chances like that to score so when I saw it and saw I had an open lane to score, I just knew.”

Elmont (4-3) had another strong performance by its offensive line of Emmanuel Flemming, Klay Dehaney, Jones, Mikhail Reid and Adjatay Johnson as the Spartans ran for 286 yards on 25 rushes, averaging more than 11 yards a rush, led by Djalo’s three scoring runs.

“We know once we get Michael a certain amount of space, he’s gone,” Jones said. “There’s no catching him. He’s a great athlete. I Iove to block for him because I know he’s going to make plays for us.”