Everything felt like it was snowballing toward something special for North Shore football. A talented nucleus was in place. A culture of grit and hard work was carrying over from the 2019 and 2020 Vikings teams. A 2-0 start to the season had them all believing.

That’s when the Vikings struck an iceberg. Two, actually.

They first ran into Cold Spring Harbor. Then Seaford. Just like that, the once-undefeated Vikings were back to .500.

"Losing tough games like that, sometimes they can push a team apart," North Shore coach Dan Agovino said in reference to his team’s losses to Cold Spring Harbor and Seaford that brought its record to 2-2 in early October. 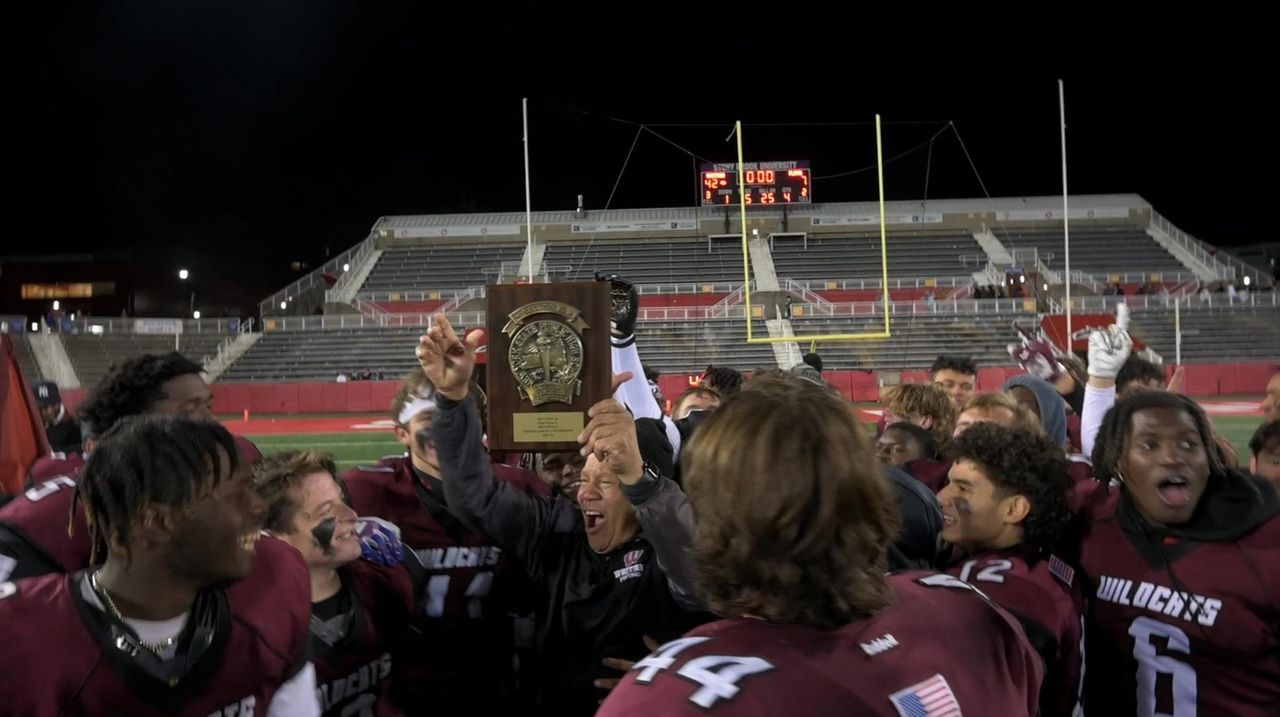 High School Spotlight: Whitman and North Shore advance to LICs, plus plays of the week Newsday's Gregg Sarra looks at the Whitman vs. Floyd Division I championship game and the North Shore vs. Cold Spring Harbor Conference IV championship game, plus the top plays of the week from across Long Island in the latest episode of the High School Sports Spotlight.  Credit: Newsday / Howard Simmons

Except the Vikings wouldn’t let their losing skid sink them.

"For this team," Agovino said, "it was the exact opposite."

Members of the team point to their losing streak as a pivotal moment. It was a lot of adversity, it was difficult to swallow — but it was key.

"We all reflected as a team and knew we needed to step it up at practice which would then carry over to the games," senior Daniel Quigley said. "It made all of us realize that we all needed to play for one another."

They also needed to re-evaluate their approach. After two deep playoff runs in consecutive seasons — the Vikings went to the Nassau IV final in 2019 and county semis in 2020 — North Shore was daydreaming of a championship run from the very beginning of this season.

But the team was perhaps a little too preoccupied with that vision, Agovino said.

"We reset our goals and decided to take things one game at a time as opposed to looking far ahead," Agovino said.

Soon after, the Vikings coach said he began to notice a closer bond between his players. More trust, he said. It’s why Agovino was comfortable making a significant switch to his offense.

After an injury forced Quigley to miss some playing time beginning in Week 7, junior Peter Liotta filled in for him at quarterback

The change became permanent as Quigley, an all-county selection at quarterback last season, was moved to running back to form a dynamic tandem at the position with senior Nick La Rosa.

With Liotta commanding the unit, the North Shore offense is "maximizing our assets," Agovino said.

And as for Quigley?

"You have to give him so much credit," Agovino said. "He accepted the change and has excelled at running back. He put the team first."

It’s those types of adjustments that have the Vikings in unprecedented territory.

"We’re not a powerhouse program traditionally," Agovino said, "but we’re a proud program. And we talk a lot about the history of North Shore football. The kids like to ask a lot of questions about past teams because I’ve been here for a while."

Agovino is in his 20th season at the helm of the program. North Shore went 0-8 during his first season in 2002, before any of his current batch of Vikings were born. Still, the significance of this moment is not lost on the teenagers who will take the field at Kenneth P. LaValle Stadium on Saturday.

"We’ve had several successful teams in the past that didn’t get the opportunity to achieve what we have," Liotta said. "Every time we go out there, we play for those guys and those teams."