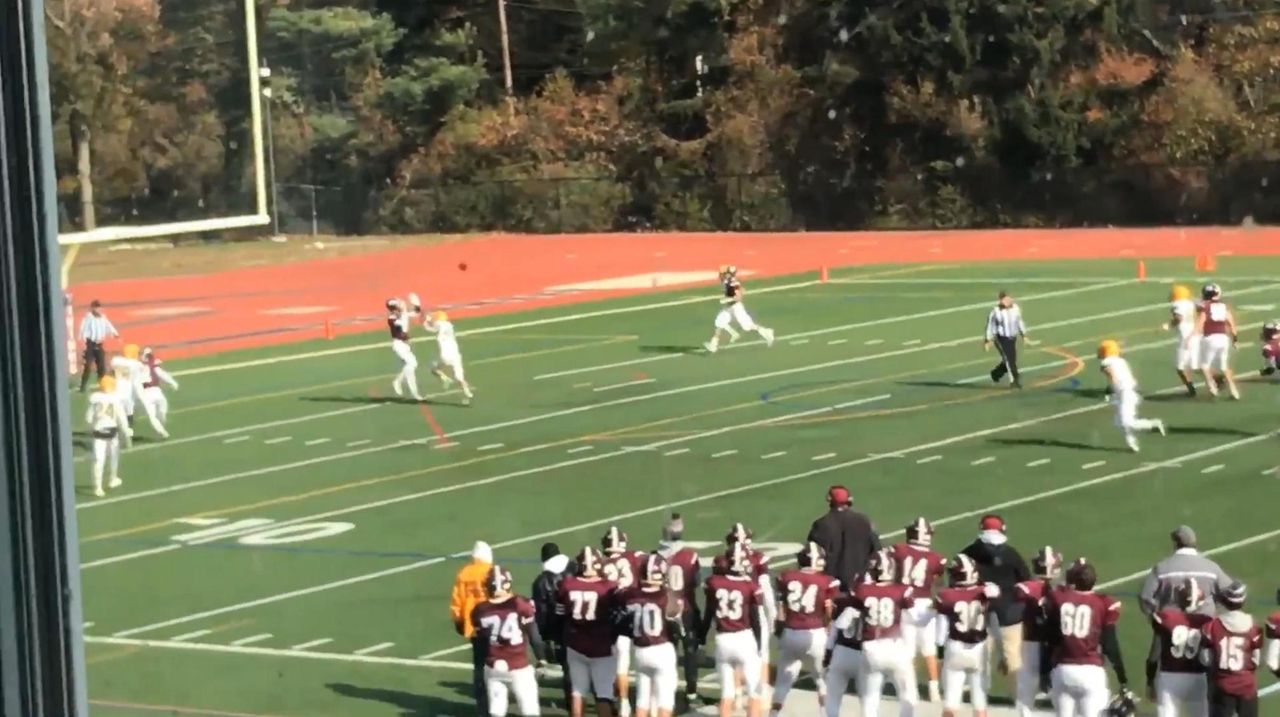 James DeSimone soaked in the moment and instantly reflected. Reminiscing about last season’s arduous 2-6 campaign, the North Shore quarterback was overcome by a wide range of emotions shortly after his team punched its ticket to the county semifinals.

“It’s hard not to get choked up,” said DeSimone after completing 11 of 15 touchdown passes for 215 yards and four touchdowns in No. 4 North Shore’s 34-12 home victory over No. 5 Lynbrook in a Nassau Conference III quarterfinal on Saturday afternoon. “It was a special day.

“It’s the same group of guys; we didn’t lose that many guys,” he said. “But we knew what we had and that we had to dominate and get physically and mentally stronger. And I think we’ve been proving that all year.”

North Shore (8-1) will face defending Conference III champion Plainedge in the semifinals on Nov. 15 at Hofstra.

The Vikings led 14-6 at the half, but following back-to-back touchdowns on their first two possessions, their offense failed to score for the remainder of the first half. After making some adjustments at halftime, North Shore began the second half firing on all cylinders with three consecutive touchdowns.

DeSimone floated an 18-yard touchdown pass to Aiden Mandell in the back-right corner of the end zone with 10:27 left in the third to extend the North Shore advantage to 20-6. Andrew Jarko recovered a fumble at the North Shore 37-yard line on Lynbrook’s ensuing possession, leading to a 27-yard touchdown run by Jack Ledden four plays later.

“We made a couple of adjustments to the run game to block off the edge,” said Mandell, who had five receptions for 75 yards and two touchdowns. “And then they got me involved in the passing game a little more and we made some big plays.”

DeSimone later connected with Will Scarola on a 28-yard touchdown pass to widen the lead to 34-6 with 4:07 left in the third to essentially put Lynbrook (4-5) away. Scarola made an impact early on after returning a blocked punt to Lynbrook’s 19-yard line on the game’s first drive. He capped off the drive by hauling in a 15-yard touchdown reception to open the scoring.

“I just told them to keep playing football the way we’ve played all year long and let the winning take care of itself,” North Shore coach Daniel Agovino said.

DeSimone and the Vikings now embrace the challenge of knocking off undefeated Plainedge.

“It’s another game,” DeSimone said. “That’s all it comes down to. We’re gonna do what we’ve done all year. Nothing changes, it’s just a different atmosphere and we’ll have some fun.”