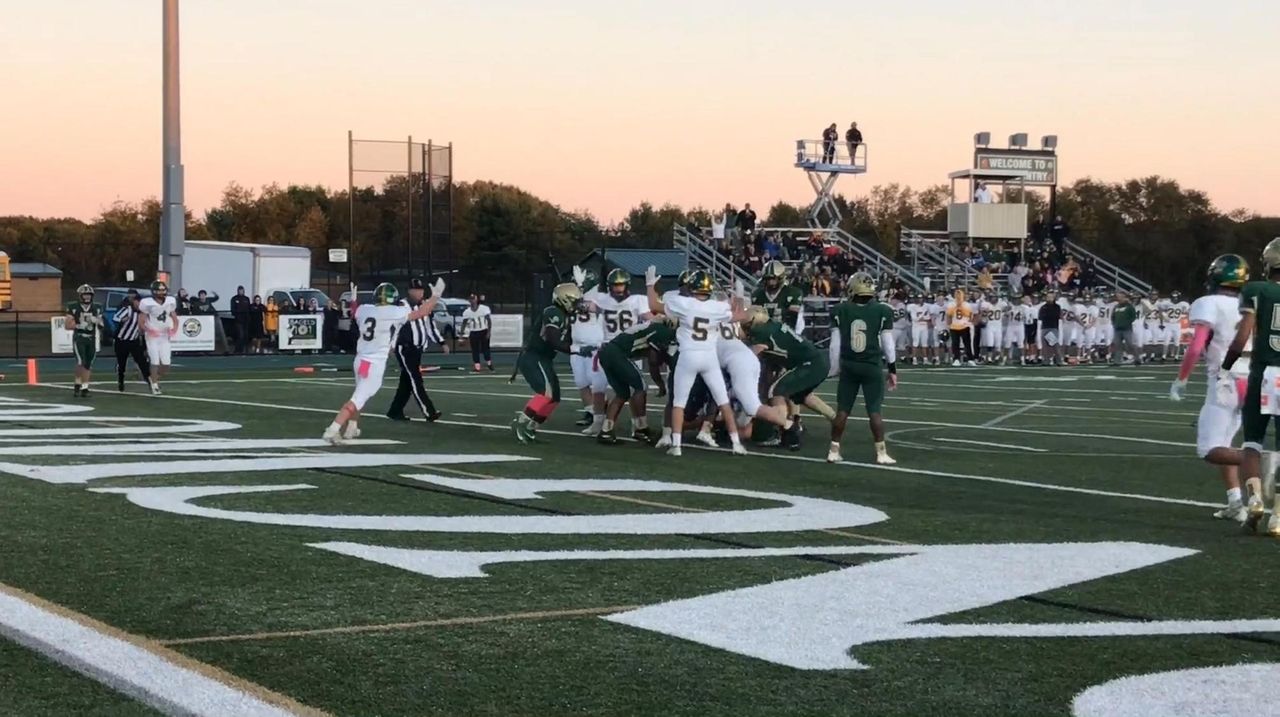 Anele Nwanyanwu was told he needed surgery. But he had other plans.

The Longwood running back/linebacker wasn’t going to miss his senior year. After suffering a torn ligament in his thumb in a scrimmage before the season, Nwanyanwu said doctors told him he’d need surgery. That would have put this season in jeopardy. He went a different route.

“It was scary,” Nwanyanwu said. “But the doctor told me I could just wrap it up and I can play so I picked playing instead of surgery.”

But even with his right hand taped and surrounded by additional green protective padding -- a color he chose to match the Lions’ colors -- Nwanyanwu was one of the toughest players to bring down Friday night. He rushed for 152 yards and two touchdowns on 16 carries as host Longwood defeated Ward Melville, 27-21, in a Suffolk Division I football matchup.

“He’s just been a warrior the last few weeks running the ball,” coach Jeff Cipp said. “He has a thumb injury. They said he was going to have to have surgery, might be out for the season. But he opted not to have surgery. So he’s just been playing through that and he’s really emerging as one of the top tailbacks in the county.”

Nwanyanwu was rarely brought down by the first defender Friday, including breaking multiple tackles en route to touchdown runs of 35 and 42 yards.

“I have to push through to help my team win, at all cost,” he said. “I don’t want to be taken down by the first guy.”

Ward Melville (2-2) blocked a punt and then opened the scoriing with the first of three touchdown runs by Michael Fiore, giving the Patriots a 7-0 lead with 4:13 left in the first quarter. Fiore finished with 182 yards and three scores on 35 carries.

Longwood (3-1) responded with a 72-yard punt return touchdown by Zach Soriano followed by Nwanyanwu’s 35-yard touchdown run to take a 14-7 lead into the half.

Fiore and Nwanyanwu each traded touchdown runs in the third quarter before Fiore’s 5-yard touchdown run tied the score at 21 for Ward Melville with 11:21 remaining in the fourth quarter.

Fernando Rodriguez broke a 41-yard touchdown run with 7:40 remaining for the game’s final score for Longwood. And he credited the offensive line of Michael Loughran, Aaron Basar, Kory Stevenson, Chris Alvarado and Neal Brown for creating the lane.

Ward Melville had a chance to score late following a fumble with the ball at the Longwood 36-yard line with 30 seconds remaining, but the Lions recovered a fumble one play later on a hook-and-ladder play.

After losing to the Patriots in the Suffolk I semifinals last season, Longwood had no shortage of motivation Friday.

“We’ve been losing to them two years, back-to-back,” defensive tackle Vishnu Wilson said. “They knocked us out of the playoffs.”

Nwanyanwu added, “You never forget about that.”