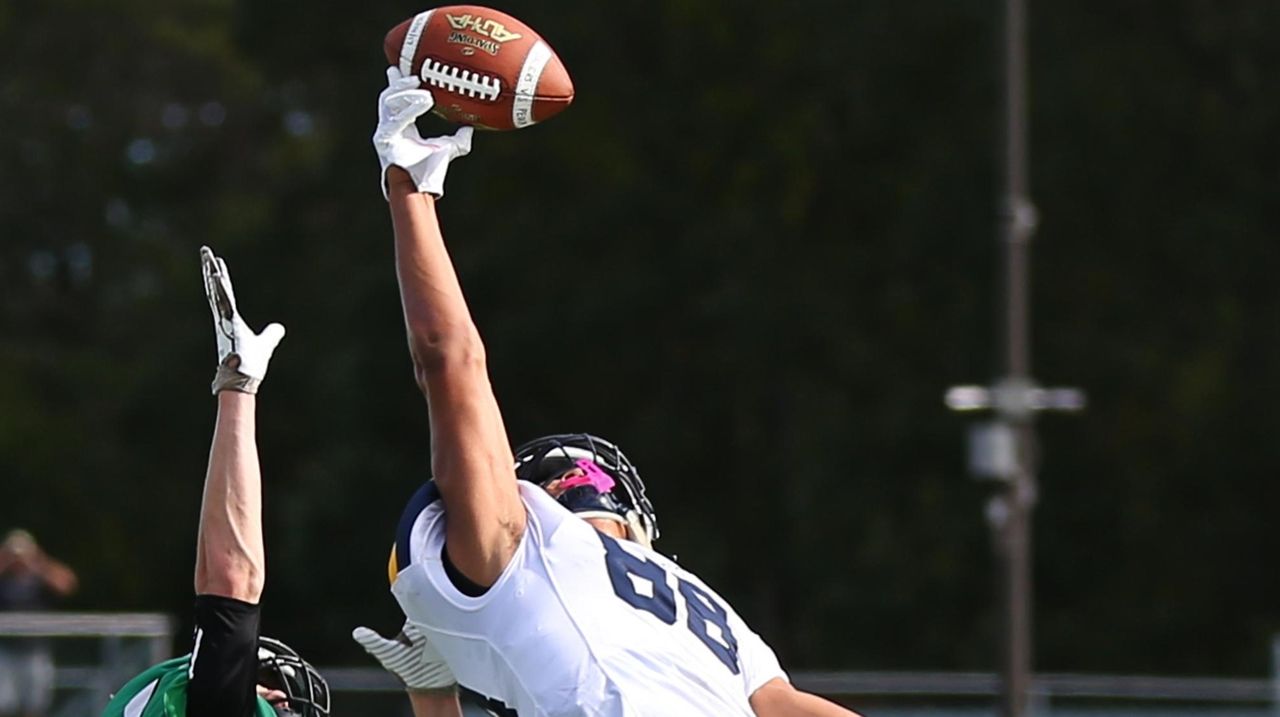 Massapequa’s Owen Glascoe could not get the images out of his head from last season’s shutout loss against Farmingdale in the Nassau football playoffs.

It became like a continuous nightmare playing over and over again for Glascoe and the Chiefs. In fact, it was a bad rerun. Literally. Massapequa coach Kevin Shippos had the tape from the Farmingdale game playing in the weight room when his players lifted in the offseason.

“That [56-0] loss to Farmingdale hurts to say, but it helped us,” Glascoe said. “It definitely helped us, and got us riled up for this game. We came out and played a helluva game.”

Especially Glascoe. The 6-3 senior had seven catches for 136 yards and two touchdowns. He added a rushing touchdown, as well as an interception, to lead visiting Massapequa to a 55-21 win against Farmingdale before a crowd of 800 in a matchup of second-place teams in Nassau Conference I on Saturday.

However, this was far from a one-man show. Quarterback Kenny Galvin was 16 of 24 passing for 294 yards and five touchdowns for Massapequa (5-1).

“Today was the sweetest revenge,” Galvin said. “We lost last year to Farmingdale, 56-0. It was probably the most embarrassing time I’ve ever had on a football field in my life. I hated every second of it. Today we returned the favor. We wanted [to score] 56 but we put up 55.”

Massapequa, which led at the half 28-21, cashed in on a short punt by Farmingdale (4-2) late in the third quarter. The Chiefs used a little trickery as Glascoe took a pitch on what seemed like a reverse. Instead, he stopped and threw a pass to Galvin for a 25-yard reception to the Dalers’ 16. Glascoe, who had a pair first-half TD catches, rumbled in on a toss left from 16 yards out for his third touchdown as Massapequa led 35-21 after Eric Marsh’s PAT.

Marsh was key on the next play, when he recovered his own onside kick after it hit a Farmingdale player at midfield. Five plays later, Glascoe made a key block that allowed Angelo Petrakis to score on a 20-yard screen pass — Galvin’s fifth TD pass — as Massapequa was up 42-21 with 1:19 left in the third quarter.

“[Owen is] an all-around football guy,” Galvin said. “He even does the little things. He likes to blocks, and he likes to run people over. He does everything.”

Petrakis also contributed with 19 carries for 181 yards and a rushing touchdown, which came on a 42-yard jaunt early in the fourth quarter. Garrett Gibbons (11 carries, 56 yards) scored from 4 yards out to end the scoring with 3:10 remaining. All that was left was the Chiefs defense — led by defensive end Conor Payne’s two sacks — to pitch the second-half shutout.

“The Massapequa-Farmingdale rivalry is huge,” said Shippos, in his seventh season. “The way the season ended last year was very, very embarrassing and we’ve had this date circled since then. I told my guys you might only get one shot at them, so be ready, and they were.”