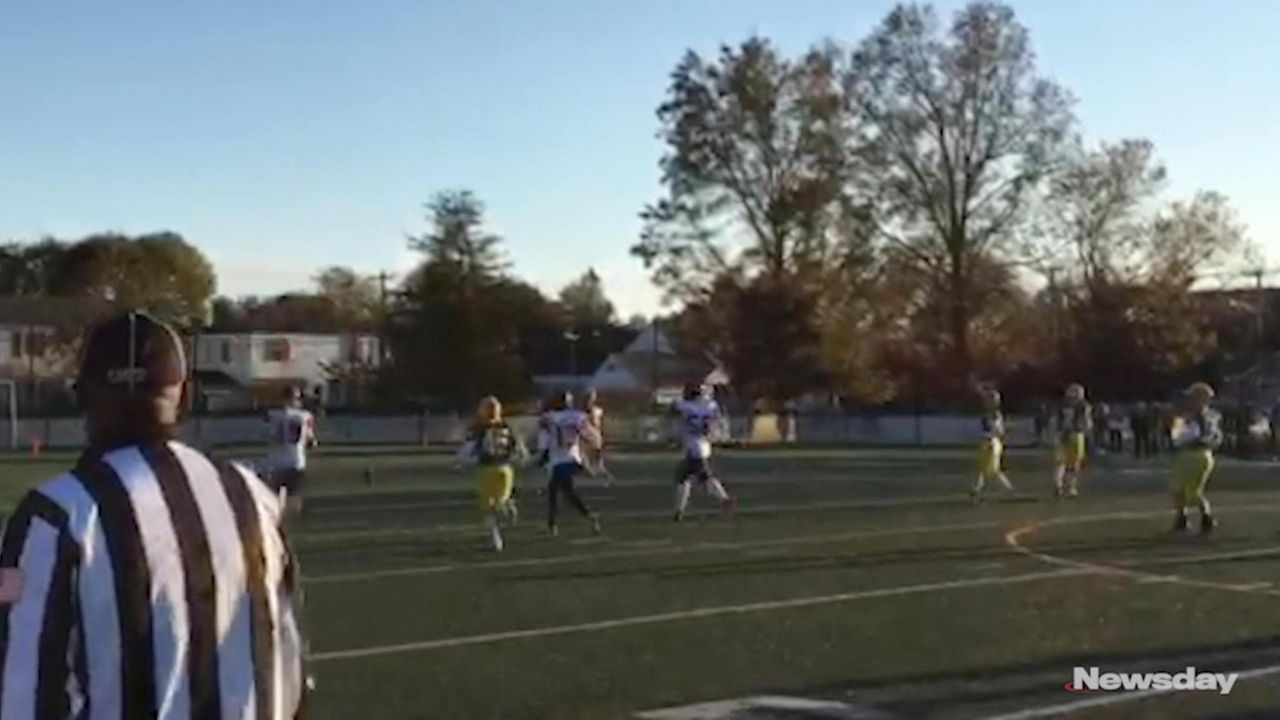 The Plainedge football team elected to punt on first down leading Lynbrook, 36-0, during a Nassau Conference III football game on Saturday, Nov. 2, 2019. The decision comes after Nassau’s "lopsided scores policy" was invoked to suspend Plainedge head coach Rob Shaver this week after the Red Devils’ 61-13 win over previously unbeaten South Side in a battle for first place Oct. 25. Credit: Newsday / Roger Rubin

Plainedge ventured once again inside the Lynbrook 20 on Saturday, this time via an unsportsmanlike conduct penalty on the Owls. Approximately five minutes remained in the third quarter and the defending Nassau Conference III champion Red Devils led by 36 points. On the Lynbrook 15, Plainedge unveiled a very untraditional red zone package.

First the Devils – already playing second-stringers – added a huddle to their no-huddle offense. Next, after running back Joe Leone’s eight-yard rush, quarterback Travis Shaver intentionally took a delay-of-game penalty. Then Shaver ran over right end and made sure to slide before getting the first down. And after taking another delay flag, Shaver took a knee to turn it over on downs.

On their next possession, the Red Devils punted on first down.

Plainedge’s 36-0 win before a sparse crowd at The Marion Street School in Lynbrook brought to life some real issues associated with the Nassau County sportsmanship rule adopted to keep teams from running up scores.

The "lopsided scores policy" was invoked to suspend Plainedge coach Rob Shaver this week after the Red Devils’ 61-13 win over previously unbeaten South Side in a battle for first place Oct. 25; he was disciplined in a unanimous vote by a six-person committee that reviews victories surpassing the 42-point rule. In the three years since Nassau first instituted a policy to prevent lopsided games, 10 contests were decided by more than 42 points and in nine cases the committee heard the offending coach’s reasoning and cleared him. Shaver’s explanation was heard by the committee last Monday and he is the first coach to get a suspension.

South Side coach Phil Onesto did not feel Shaver had run up the score.

John Anglim, a Shaver assistant, served as interim head coach as Plainedge finished its regular season 8-0 and clinched the top seeding for the playoffs.

“We were just trying to adhere to the rules that are set forth by Section VIII football and we wanted to keep a buffer,” Anglim said. “From what I understand, we allegedly mismanaged the game last week so we wanted to make sure we manage the game properly this week. So with our ‘2s’ and ‘3s’ in, we got inside the 20 and, just when you’d want to score, we made sure we didn’t.”

Plainedge quarterback Dan Villari scored on runs of 40, 3 and 22 yards and Vince DiMarco had a 49-yard interception return for a touchdown for a 27-0 halftime lead. Leone took the first snap of the second half – and last snap for most Devils starters – for a 43-yard touchdown and a 34-0 lead and Donovan Pepe sacked Owls quarterback Dante Quilca in the end zone for a safety to make it 36-0 with 5:25 left in the third quarter.

It wasn’t long after Plainedge started the ensuing possession on the Lynbrook 35 that the contest took its bizarre turn.

“It was definitely distracting,” said Villari, who rushed for 122 yards and three touchdowns and was 7-for-15 passing for 91 yards. “I think we did a great job this week, just putting it to the side and practicing hard. If we hadn’t done well this week, we’d be pretty upset. We’ll be happy when [Shaver] is back.”

Plainedge has survived the episode with the win and now looks to repeat as county champion, return to the Long Island Championship and potentially win the game they lost to Hills West a year ago.

“Because of Coach Shaver’s influence . . . we were able to rise up and overcome any adversity or distraction inflicted upon us,” said Chris Blumenstetter, another Shaver assistant. “[He] instills valuable character lessons on his players [and] his unflappable demeanor permeates to his peers. If [Shaver] was anyone other than who he is, we would have been unprepared for this moment.”