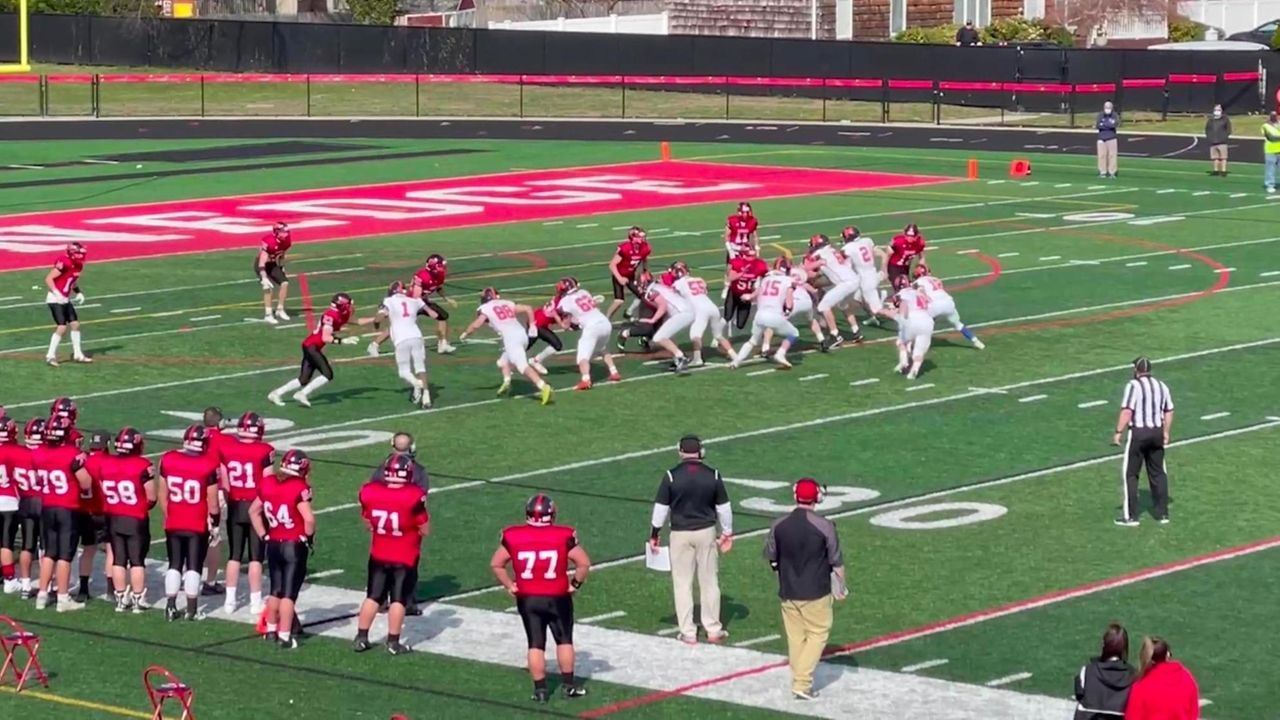 While most teams may prefer to utilize a prototypical power back at the goal line, and potentially the game, just inches within reach, Manhasset employs a different philosophy with one of their "goal line running backs."

Enter the shifty 5-7, 180-pound Tyler Roszko, a junior who made sure to reward his coaching staff for their confidence in him, especially during a showdown against the defending Long Island Class III champions.

Roszko worked through the pile on 4th-and-goal from less than a yard for the go-ahead touchdown with 7:30 remaining in Manhasset’s 13-7 victory at Plainedge in a Nassau Conference III football game on Saturday afternoon.

His score ultimately proved to be the differencer as Manhasset’s defense denied Plainedge just inches short of the first down marker at its own 40-yard line, forcing a turnover on downs on their final possession to seal the victory.

"I just wanted to keep my feet moving," Roszko said after recording six carries for 14 yards and the deciding touchdown. "Make sure I get in, score and it ended up winning the game, which was sweet."

The loss for Plainedge (2-1) was also the program’s first since the 2018 Long Island Class Class III championship. Plainedge entered the day with L.I.'s longest active football winning streak at 14 games.

"I’m so happy for the kids," Manhasset coach Jay Iaquinta said. "This was a great, hard-nosed team and we weren’t sure if their physicality could be matched with our kids’ and it did."

Trailing 7-0 at halftime, Manhasset (3-0) tied the score with 8:09 left in the third thanks to a 3-yard rushing touchdown from Aidan Mulholland that capped off a 65-yard drive.

"It means a lot to us," said Mulholland, who had 15 carries for 68 yards and the touchdown. "So much respect for Plainedge, such a great team and very well-coached. They played super hard.

"But we have something special here. We have a great group and I’m just so proud of us. Can’t really say enough about these guys we have. We never give up and we fight until the end."

Plainedge opened the scoring with 1:42 left in the first when Jason Lascala elevated and ripped down a 12-yard touchdown reception on a 4th-and-7 pass from Travis Shaver. Lascala also snagged a fumble recovery out of the air at the Plainedge 12-yard line in the final minute of the first half to thwart a Manhasset scoring threat.

Manhasset quarterback Rory Connor, who completed 8 of 9 passes for 86 yards, said maintaining a high energy level despite the halftime deficit helped propel his team in the second half.

"There was a lot of energy at halftime," Connor said. "Great coaching, great game plan and the defense really stepped it up, holding the defending Long Island champions to seven points. That’s really impressive and I’m so proud of them."

Photos: Plainedge vs. Manhasset footballScenes from a Nassau Conference III football game between Plainedge and host Manhasset on Saturday.